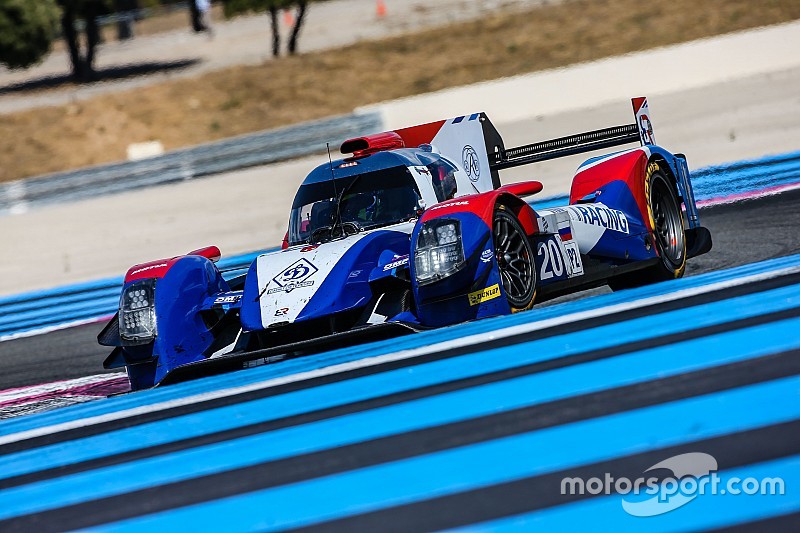 Jota Sport heads to Portugal for the fifth and final round of the European Le Mans Series next month with a narrow one-point advantage but it could have been a totally different story. The British team had taken the chequered flag first in the Four Hours of Le Castellet, achieving what appeared to be its second consecutive ELMS “win”. Simon Dolan, Filipe Albuquerque and Harry Tincknell had swept their Gibson 015S-Nissan to a commanding 30-seconds victory earning them an 18-point lead in the title standings.

...we made a genuine mistake caused by a ‘bug’ in a software programme which kept Filipe in the car longer than is permitted in the regulations.

But hours after the race had finished, organisers informed the team of a drive time infraction for Albuquerque, the Portuguese driver having exceeded the permitted 90 minute driving time by 1m 57secs – an innocent error by driver and team later discovered by Jota to have been caused by a software gremlin. The subsequent 45secs penalty dropped the “Mighty 38” to third place in the final classification – Jota’s fourth successive ELMS rostrum finish of the year – but a bitter pill to take after a dominant performance around the 3.6-mile Paul Ricard track in Southern France.

Dolan started the four-hour race from pole-position on the 27-car grid, Tincknell having earlier in the day recorded Jota’s third consecutive “pole” equating to the team’s 10th successive ELMS race start from the front row. “Sportsman driver” Dolan, engulfed by a charging pack at the green light, was quickly in to his stride and lapping consistently fast. At one-quarter distance and following the first scheduled pit-stops, Dolan lay third 23secs off the lead despite being up against “pro” drivers before a Safety Car period halved the deficit.

Albuquerque took over the Gibson on 100mins later with the Audi Sport “factory” driver resuming seventh but was second, under six seconds behind the leader after setting a searing pace, with 90mins remaining before pitting for fuel. The Portuguese led on 70mins when the leader pitted and with a 16secs advantage, handed over to Tincknell with 45mins left on the clock. After the final pit-stops had been completed, the Nissan NISMO driver led by 5.8secs with a 38mins dash to the chequered flag in prospect. But Tincknell took command of the situation, duly crossing the finishing line over half a minute to the good.

Subject to confirmation by the FIA World Endurance Championship selection committee, Jota Sport will contest the 2016 FIA World Endurance Championship with an ORECA 05-Nissan. The Kent-based team will continue to compete in the European Le Mans Series with its venerable Gibson-Nissan with Dolan already committed to the championship for the fifth successive year. The fifth and final round of this year’s ELMS is staged at Estoril in Portugal on 18 October with a maximum of 26pts up for grabs.

Simon Dolan (GB). Age 46. Born: Chelmsford, Essex. Lives: Monaco (MC): “I’m absolutely gutted over the penalty as we gained no advantage. We actually were worse off because of the driving time and I feel it’s a very, very harsh penalty. In terms of the race, we won on track by a considerable margin due to fast pit-stops and all three drivers setting the top-seven fastest times. The last time I physically started a race was six years ago and so I felt a bit like the new boy at school! I was ‘mugged’ at the start but it was all clean and I enjoyed my stint, it was good fun. I kept up a good pace before the Safety Car bunched up the field up. The tyres were understandably going off late on and I frustratingly had a little spin. In general though I was happy with my stint and very proud of the pit crew who performed perfectly, performing the fastest full service pit stop.”

Filipe Albuquerque (P). Age 30. Born & Lives: Coimbra (P): “I had been very happy with this win and it’s a shame what happened to us but rules are rules. It still means we go to my ‘home’ race at Estoril next month leading the championship so the spectators there will again have a tremendous championship finale to watch. The start for Simon was tricky but he drove very well and gave me the car within striking distance of the lead. I enjoyed my stint because the Gibson was fantastic. Ricard was supposed to be our hardest race of the season but in the end we really controlled it with our excellent pace.”

Harry Tincknell (GB). Age: 23. Born: Exeter, Devon. Lives: Sidmouth, Devon (GB): “By the time I took over the Gibson for the final 40min stint of the race it was fairly easy for me. It was a good race, my stint was just about bringing the car home which I did. Fast and consistent and it was the perfect weekend until a silly error cost us the race victory. The positive is that we still go to final round leading the championship.”

Sam Hignett. Partner, JOTA Group: “It looked as though we were leaving Paul Ricard having increased our points advantage in the Championship which would have been very good but then we were informed of a post-race penalty. We’d hoped for a podium, a win was not what we expected, and ultimately it was a third place. I’m very disappointed for the team. Our driver combination, the trusty Gibson and great team work looked to have earned Jota its second consecutive ELMS victory. But we made a genuine mistake caused by a ‘bug’ in a software programme which kept Filipe in the car longer than is permitted in the regulations. It was actually a disadvantage to us as he was on two stint old tyres and he had to hand over to Harry who only had to do one stint on his tyres! So to get the penalty and give up some of our winning advantage was a double blow.”