The decision affecting the nr36 Signatech Alpine car means that the nr38 Jota Sport Zytek will start from pole position with the #18 Murphy Prototypes Oreca Nissan alongside on the front row.

The Nissan powered #36 Signatech Alpine of Nelson Panciatici took the provisional pole position for the 3 Hours of the Red Bull Ring with a 1m23.871 lap as the chequered flag was shown to end the 20 minute session. However the time was set under a yellow flag being shown at Turn 6 for a car that was stuck in the gravel trap. After qualifying the Stewards decided that all the lap times for the #36 Signatech Alpine would be cancelled and the car would start at the end of the LMP2 cars.

The #38 Jota Sport Zytek of Oliver Turvey was leading the time sheets until the final lap with a 1m23.871 lap of the 4.9km Red Bull Ring track. The decision affecting the nr36 car means that the nr38 Jota Sport Zytek will start from pole position with the #18 Murphy Prototypes Oreca Nissan alongside on the front row. 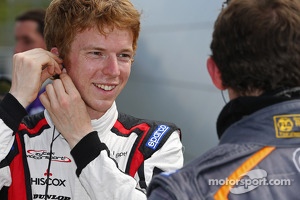 However the leading cars were deemed to have exceeded the track limits and the Stewards decided to remove the three best laps for cars 47 and 49 promoting the #46 Algarve Pro Racing FLM Oreca 09 into Pole Position.

Britain’s Nick Tandy stormed through to take the LMGTE Pole Position for Porsche in the Proton Competition Porsche 911 GT3 RSR with a lap time of 1m29.391, 0.122s ahead of Andrea Bertolini in the JMW Motorsport Ferrari. The two RAM Racing Ferrari’s will fill the second row of the GTE grid with Johnny Mowlem in the #52 car 0.1 seconds ahead of teammate Gunnar Jeannette in the #53 458 Italia. Jeannette was penalised at the end of the session for exceeding the track limits and the penalty was the removal of the three best lap pushing the Ferrari down to sixth place behind the #67 IMSA Performance Porsche and the nr75 Prospeed Competition Porsche.

After winning the GTC class on their ELMS debut at Imola, SMP Racing are in good shape in Austria with both their cars on the front row of the GTC grid. The #72 Ferrari 458 Italia of Luca Persiani finished 0.036s ahead of Kirill Ladygin in the race winning #69 Ferrari. The second row will be headed by the #62 AF Corse Ferrari of Andrea Rizzoli, with Peter Kox alongside in the #60 Kox Racing Lamborghini. Class points leaders Ecurie Ecosse were 5th but just 1 second behind the leading SMP Racing Ferraris.