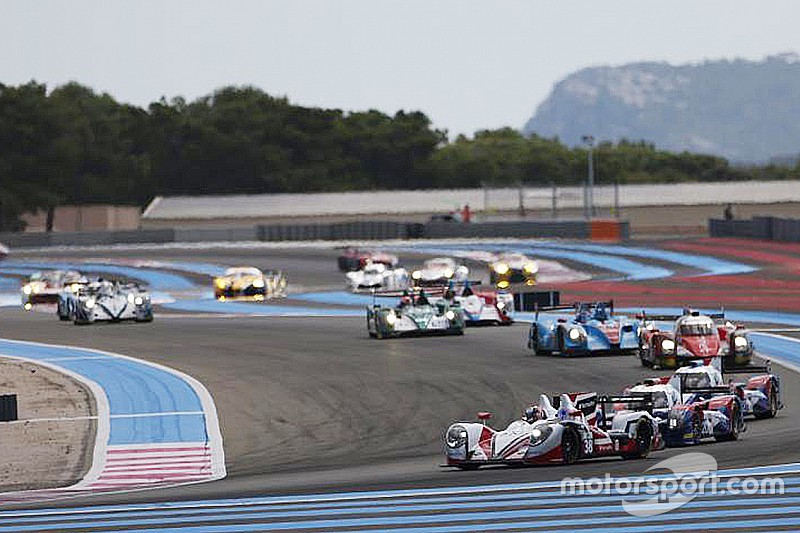 JOTA Sport scored a well-judged ELMS victory at Paul Ricard this afternoon to extend its title lead to 18 points with one round remaining.

Harry Tincknell crossed the finishing line 30 seconds ahead of the similar Greaves Motorsport Gibson 015S after an undulating four-hour race, which was punctuated by two safety car periods.

The teams’ silver categorised driver Simon Dolan started the race but was quickly swamped at the first turn by the two AF Racing BR01 cars driven by Mikhail Aleshin and Nicolas Minassian respectively.

Aleshin dominated the first two stints of the race before handing over to team mates Victor Shaytar and Kiril Ladygin. After a second safety car in the third hour, which was deployed after Michael Lyons, suffered a sizeable accident at the fearsome Signes right-hander, the BR01 LMP2 cars fell away from the top positions.

The middle section of the race saw the Thiriet by TDS ORECA 05 lead, despite losing time early in the race with a suspected puncture. Tristan Gommendy drove a mammoth series of stints to put the car in contention for the win, but a brake problem late in the race ended any chance of the team eating in to JOTA’s then slender points lead.

Factory Audi driver Filip Albuquerque drove a race defining double-stint in the middle portion of the race to lay the foundations for JOTA’s win. The Portuguese racer was able to hand the car over to Tincknell for the final 45-minutes with a healthy lead over the chasing Greaves Gibson LMP2 car.

The four-hour mini-enduro featured several frantic on-track scraps, the most entertaining of which featured a three-way battle for second place in the penultimate hour between Pierre Thiriet, Lancaster’s Greaves Gibson and Shaytar’s BR01.

Ultimately, Lancaster emerged ahead and finished second to elevate Greaves in to runners-up position in the title standings ahead of the Thiriet by TDS squad.

The second of the BR01 LMP2 cars, driven by Maurizio Mediani, Nicolas Minassian and David Markozov came home in fourth place. They were a lap ahead of the Krohn Racing Ligier-Nissan, which in the hands of Olivier Pla enjoyed a fine end to the race to capitalise on Thiriet by TDS’s problems.

The first ELMS class champions were crowned this evening as Sir Chris Hoy and Charlie Robertson took the first ever LMP3 title by claiming a third class victory in four rounds.

An early race battle with the sister Team LNT Ginetta-Nissan of Nissan GT Academy graduate, Gaetan Paletou ended when the No.2 car spun after an apparent breakage. This left Robertson and Hoy with just the task of getting to the end of the race, which they did without drama. Hoy is now set to focus on his next motorsport aim of competing in the Le Mans 24 Hours.

The LMGTE class was won conclusively by the Danish Formula Racing team to move them 19 points ahead in the class point’s standings.

Johnny Laursen, Mikkel Mac and Andrea Rizzoli were aided significantly by the safety car procedures to claim a second consecutive win. They headed the Marc VDS BMW Z4 by just over a lap, the Belgian squad claiming their best result of the season so far.

The GTC class for GT3 spec cars was taken by TDS Racing trio Franck Perera, Dino Lunardi and Eric Dermont. It was the teams’ second win after victory at Silverstone in April, and their BMW Z4 led home the No.62 AF Corse Ferrari driven by Stuart Hall, Francesco Castellacci and Thomas Flohr.

The final round of the 2015 ELMS takes place at Estoril on October 18.