Pedro Lamy and Stephane Sarrazin claimed the overall victory in the Monza 1000km, round two of the 2008 Le Mans Series season. The five-hour marathon came down to a 20-lap shootout between the No. 8 Team Peugeot Total 908 HDi FAP and the No. 2 Audi ...

Pedro Lamy and Stephane Sarrazin claimed the overall victory in the Monza 1000km, round two of the 2008 Le Mans Series season. The five-hour marathon came down to a 20-lap shootout between the No. 8 Team Peugeot Total 908 HDi FAP and the No. 2 Audi Sport Team Joest R10 TDI of Mike Rockenfeller and Alexandre Premat. 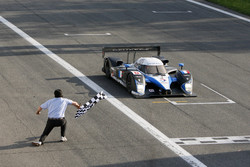 Rockenfeller led the field to the green after the late-race caution but came under attack by Lamy. The laps dwindled down and the margin decreased, with the Peugeot making a move on the Audi into the first chicane with less than 10 laps left. Lamy took the lead, but then relinquished it because he cut through a portion of the circuit, to avoid a penalty.

The following lap, Lamy tried to make the same move on Rockenfeller, but he ended up colliding with the German, resulting in a left front tire puncture for the Audi. As Rockenfeller limped back to the pits, Lamy was given a stop and go penalty for passing GT traffic under a local yellow a few laps earlier. In the end, Lamy got in and out of the pits quicker. He then sailed to the checkered flag, 47 seconds ahead of Rockenfeller's Audi.

"It was a very difficult race because our car suffered from oversteer, unlike the No. 7 908 which had a better set-up," Lamy said. "The last 20 laps or so of the race itself were very virile, but our tangle was nothing more than a race incident."

Sarrazin was pleased to bag the victory after coming up short in Barcelona. The duo finished 12th overall in Spain but are now back on track in the title hunt. The defending series champions now sit third in the drivers' standings, five points behind new leaders Rockenfeller and Premat.

"It was important to win here to stay in the chase for the title," Sarrazin said. It seems strange to be thinking in championship terms so soon into the year. But by the end of the next race we will have already passed the season's halfway point."

While not a perfect day for Peugeot, as its No. 7 car had two driveshaft failures (one during warm-up), the team continued its unbeaten record in the Le Mans Series, but the this time, the race almost slipped away from them. 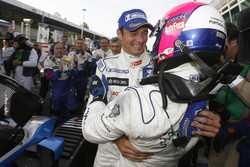 "It was a superb race which ended in an extraordinary finale," Peugeot Sport Director Michel Barge said. "It was a very close-run thing not only between Peugeot and Audi, but also in the different categories, and that can only be good for the Le Mans Series. This race marked the anniversary of our first win and we celebrated that with an all-Peugeot front row and the fastest race lap. It's a great result for Peugeot Sport and an excellent way to prepare for the Le Mans 24 Hours."

Audi's youngsters scored their second consecutive podium finish and, as mentioned above, took over the points lead. But Rockenfeller said he had a good chance to win the race if it wasn't for a slight radio miscommunication.

"I was informed that the Peugeot was going to get a stop-and-go penalty after taking a shortcut in the chicane, "Rockenfeller said. "But then he let me pass. For me, that made it pretty clear that he wasn't going to get a penalty. Of course I didn't know that he was supposed to get the stop-and-go for something totally different."

Rockenfeller, who started the race from the pit lane because of a fuel supply problem, was surprised by Lamy's tactics in the closing laps.

"When on the next lap he arrived on the outside of the end of the start-finish straight again, I defended the inside line once more. But he simply turned in and hit me, damaging my rim in the process. I had to pit and that meant my race was lost. Of course that was a shame because it could have been our first victory. At least we're now leading the championship. Still, I didn't think this action was right. We'll be defending ourselves and will really attack next time." 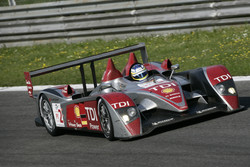 Premat was eyeing his first career sportscar win while watching in the pits, but it wasn't to be today.

"It was a very thrilling race," Premat said. "We could have won the race. Unfortunately, we had a collision with the Peugeot shortly before the finish, which - from my perspective - was unfair and cost us victory. Still, we finished as the runner-up and that's a good result."

The No. 17 Pescarolo Sport Judd of Harold Primat and Christophe Tinseau edged out the No. 15 Creation AIM entry of Robbie Kerr and Stuart Hall to take third place. Hall and Tinseau battled down to the closing moments, with the young Brit running wide on the final lap, resulting in Pescarolo's podium finish.

"What can you say after a race like that?" Primat said. "We started 13th, behind two Peugeots, two Audis, a Lola Aston Martin and a whole host of other quick cars, so we never dreamed we could get a podium. To get one, therefore, is absolutely unbelievable and once again we've proved our consistency and the Pescarolo has shown its reliability."

While both Peugeot and Audi were fighting up front for the win, the team's delayed sister cars were seen scraping to score points further down in the running order. The No. 7 Peugeot of Nicolas Minassian and Marc Gene led the opening laps before running into driveshaft failure early on whereas the No. 1 Audi of Dindo Capello and Allan McNish had a high-speed crash resulting in bodywork and suspension damage. Both teams recovered from their setbacks and found themselves in a race of their own. Barcelona winners Minassian and Gene wound up fifth overall, one position ahead of Capello and McNish.

The prototype categories suffered its fare share of attrition throughout the race, but one accident overshadowed much of today's action. Stephane Ortelli was the victim of one nastiest crashes in recent memory when his No. 5 Team Oreca Matmut Courage-Oreca LC70 Judd was sent catapulting through the air into the Turn 1 chicane. The car appeared to have had a mechanical failure in the rear, snapping the prototype sideways on the high-speed front straight. It then caught air, flying upside down into the first chicane, nearly clipping the No. 1 Audi of Allan McNish, who was underneath. The French machine then made contact with the ground, shedding its engine and under tray and sending it into a violent series of rolls. The car came to rest in the catch fence. Ortelli was awake and alert following the incident and was later diagnosed with a compound fracture of his ankle. He was very lucky to escape serious injury.

"My thoughts are with Stephane who barrel-rolled through the air across the nose of my car," McNish said. "It was a shocking accident - a very frightening sight - and I wish him a quick and full recovery."

Another prototype that faced misfortune was the No. 16 Pescarolo Sport Judd, which ran in third before crashing out in Turn 1. However, Emmanuel Collard's incident paled in comparison to Ortelli's accident. 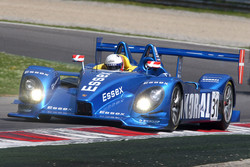 The Team Essex Porsche RS Spyder of John Nielsen and Casper Elgaard captured their first-ever victory in LM P2, leading a Porsche 1-2-3 sweep of the podium. The Danish crew overcame a stop and hold penalty in the third hour and a late-race charge by the Van Merksteijn Motorsport entry to take the checkers.

"We want to compete to win, and this came a little early, but we will take it," Nielsen sid. "It was not easy at all, and the one minute penalty made it tight at the end but we were first over the line, have the points and the trophy."

The Dunlop-shod RS Spyder took over the class lead in the second hour after Jos Verstappen in the Van Merksteijn entry got hit by a GT class Spyker, resulting in rear-end damage. However, Verstappen and co-driver/owner Peter Van Merksteijn rallied late in the race to finish second in class.

"After the collision, I didn't expect that we would still make it onto the podium," Verstappen said. "But today, the Porsche once again proved its strength and we have all been working very hard to achieve this result."

Horag Racing looked to be in the position to repeat their win here last year, but things turned sour midway through the race. Didier Theys was on a charge, closing the gap to race leader. However, the Belgian spun his Porsche RS Spyder into the gravel trap, losing two laps. Theys and co-drivers Fredy Lienhard and Jan Lammers recovered to finish third in class after a potential race-ending incident.

The RML MG Lola EX264 of Tommy Erdos and Mike Newton finished fourth, with the Saulnier Racing Pescarolo Judd of Pierre Ragues and Matthieu Lahaye rounding out the top-five in class. 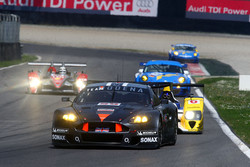 The hard-fought battle in LM GT1 ended with the Team Modena Aston Martin DBR9 of Antonio Garcia and Tomas Enge victorious, 12 seconds ahead of the second-placed No. 72 Luc Alphand Aventures Corvette C6.R of Olivier Beretta, Guillaume Moreau and Patrice Goueslard. The two cars dueled all the way to the checkered flag, providing late-race excitement that complimented the battle for the overall win.

"It was a hard race to the end," Garcia said. "The car was running really well, and there was only one pit stop that was a bit slow. The rest ran well."

It was Team Modena's first win of the season after the Alphand car took top honors in Barcelona. The sister No. 73 Corvette of Jean-Luc Blanchemain, Sebastien Dumez and Patrice Manopoulos rounded out the podium in third.

In LM GT2, Virgo Motorsport's Rob Bell and Gianmaria Bruni looked to be on their way to the second win of the season, only to be struck with a series of tire punctures. The Ferrari F430 GT led the opening two hours before running into trouble, dropping them well down the field. This gave the No. 76 IMSA Performance Matmut Porsche 997 GT3 RSR of Richard Lietz and Raymond Narac the top spot, and the French Porsche team didn't look back, cruising to a one-lap victory. 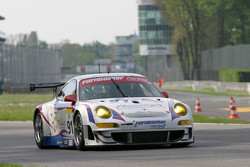 However, post-race inspection found that the IMSA Performance Matmut Porsche ran with a non-compliant airbox and has been excluded from the results. This gives the second-placed No. 91 Farnbacher Racing Porsche the victory. Lars Erik Neilsen, Richard Westbrook and Allan Simonsen pick up their first win of the year, leading a 1-2 result for the German team. Farnbacher's Ferrari F430 GT of Pierre Ehret and Pierre Kaffer is now classified in second.

Bell in the Virgo Ferrari moved his way back into podium contention only to suffer yet another tire puncture late in the race. The British team finished 10th, out of the points.

After an enthralling race on one of Europe's classic circuits, the series heads to another famed course, Spa-Francorchamps, for round three on May 11th. Considering today's heated rivalry, the Audi vs. Peugeot battle will be steaming in the Arden Mountains!