Le Castellet: AF Corse is silver in the championship

In their AF Corse Ferrari 458 Italia #62, Stefano Gai, Andrea Rizzoli and Lorenzo Casé finished second in the points in the GTC group

The “3 Hours of Paul Ricard” at Le Castellet, France brought down the final curtain on this year’s European Le Mans Series. In their AF Corse Ferrari 458 Italia #62, Stefano Gai, Andrea Rizzoli and Lorenzo Casé finished second in the points in the GTC group at the end of this last race. 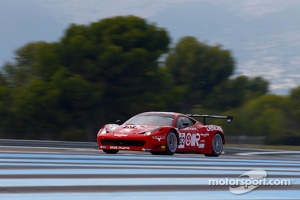 From the very outset of this year’s competition, the Italian trio showed the potential to fight for the overall championship. This reality was reiterated at Le Castellet as the three drivers were fighting for the top spot on the podium and top spot overall. However, near the end of the race, during lap 82, a technical problem dashed their chances and ended their race.

They finished the season second in the GTC Team standings. In the GTE category, another great race – thanks to a very fast and constant pace – for Piergiuseppe Perazzini, Federico Leo and Marco Cioci in the AF Corse Ferrari 458 Italia #55. They were fighting hard for second place and gaining ground. However, their efforts were stymied by two drivethrough penalties following a debatable decision of the race direction.

Nevertheless, Perazzini, Leo and Cioci finished the race in fourth position and also fourth in the GTE Drivers championship. Remaining in the GTE category, Howard Blank, Yannick Mallegol and Jean Marc Bachelier – in their AF Corse Ferrari 458 Italia #54 – were authors of a very solid performance for a fast race without mistakes and with regular excellent laps.

They took the chequered flag in eight spot. In the GTE Drivers championship classification, the only all bronze trio in the competition is eleventh. AF Corse is third among the GTE Teams.