LMP2 - Thiriet by TDS Racing ended on a high note! 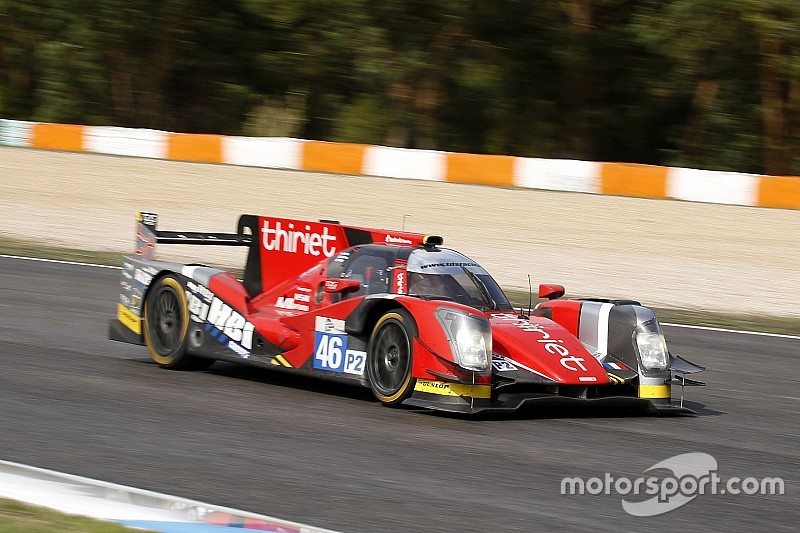 At the end of a great race, the Oreca 05 Nissan of the Thiriet by TDS Racing won the last round of the season.

For the European Le Mans Series finale, the championship was welcomed on the Estoril track (Portugal). The first day devoted to free practices went very well in spite of the harsh weather conditions. Nicolas Lapierre, the new Thiriet by TDS Racing’s driver, set the third fastest time in the morning and then the second in the afternoon. The next day, he set the third fastest time at the qualifying session held on a drying track.

Ludovic Badey was in charge of the start. At the first corner, he was 2nd and kept the same pace as the leader for several laps. During the first 30 minutes, he maintained his position but trying to avoid a competitor, he went straight in the gravel. When back on the track, the Oreca 05 Nissan was 4th. A few minutes later, Ludovic went back to the pit and handed the wheel onto Pierre Thiriet for a double stint.

It was a big pleasure for me to be back in European Le Mans Series and to have this new experience with the team.

This latter was 5th at that moment, 40 seconds behind the leader. Thanks to very good lap times, he was as fast as the other drivers ahead and caught up them to be 4th. At the first drops of rain, he came back to the pits to put wet tyres. The race was given rhythm by rain and Full Course Yellow periods. It did not stop Pierre from grabbing the 3rd place two hours before the end of the race. In difficult weather conditions, Pierre was the fastest on track and narrowed the gap.

One hour and a half of the end, Nicolas Lapierre handed over. He was immediately in the pace and drove seven seconds faster than anyone else on track. In few laps, the French driver was close to the leader and took the lead few minutes later. 35 minutes away from the end, he stopped to change tyres and refuelled. He kept the lead and cruised to the victory, still remaining the fastest on track!

After 4 hours race, the #46 Oreca 05 Nissan crossed the finishing line as the winner. It is the second win for Thiriet by TDS Racing after Silverstone. All throughout the season, the team showed its seriousness and know-how. The whole team as well as the drivers did an amazing job and this job is crowned by an ELM vice champion title, only two points behind the champions.

Now, the team is going to turn towards 2016 and define its future sporting plans!

Pierre Thiriet: “The conditions were tough during my two stints. I had a god pace; I did not take any risks because I did not want to make any mistakes. As I gained confidence in the car, I started to go quicker. I really enjoyed myself in the car and I then handed over to Nicolas who did an amazing end of race. Thanks to this victory, we showed we know how to win and that we had the speed.
I am disappointed to lose the titles for only two points but a title is built all throughout the season. We lost some precious points during the year because of small mistakes. We have to face teams with very experimented, fast and perfect line-ups. They did the job, they were better than us. Nevertheless, we ended the season on a happy note with this victory and we are already thinking about 2016.”

Ludovic Badey: “During my stint, I tried to save the tyres because we had some problems with the rear ones. The track is difficult and hard. At the beginning, my rhythm was good but I did a mistake with a GTE but I did not touch it. I went into the gravel and lost only 10 seconds. It was a big but fair fight.
This victory is really nice because we have Nicolas with us. But it is really disappointing to lose the title, two points is nothing. But this is racing. With the rain, it was incredible on the track. Sometimes, we were champions, sometimes we were third, and sometimes we were second. It changed all the time. I preferred to be in the car because I got nervous in the garage. I would like to thank my team mates and the whole team for this great season.”

Nicolas Lapierre: “When we came here, we knew exactly what to do. That is to say to win this race and we focused on this target. When I jumped in the car, I was third but we were very close. We knew that if we did not win the race, we would not have any chance to win the championship. We decided to put the slick tyres as soon as possible. We took this risk and it did pay. I took the lead and then it was just about cruising to the line. I am disappointed for the team because two points is not a lot during a season. I would like to thank my two teammates and the whole team which did a very good job. The car was strong and we got the win! It was a big pleasure for me to be back in European Le Mans Series and to have this new experience with the team.”

Harry Tincknell: So near but yet so far from ELMS title glory