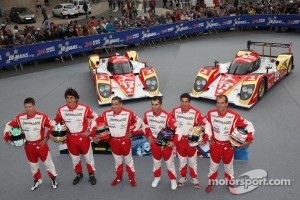 With a back to back win at the 6 Hours of Silverstone on 11th September, following their victory at Imola in July, REBELLION Racing have scored enough points to secure victory in the Le Mans Series Manufacturers' Championship for Lola-Toyota with one race still to go.

REBELLION Racing's Lola-Toyota cars feature chassis technology from Lola and a 3.4litre petrol engine supplied by Toyota Motorsport GmbH (TMG), the Toyota RV8KLM. This first Manufacturer win for Lola-Toyota has been achieved less than 12 months since the team's Lola-Toyota test car completed its first evaluation tests in Spain and Portugal. The team's Lola-Toyota LMP1 cars have secured two wins, at Imola and Silverstone, and five podium finishes in just eight Le Mans Series starts this season. At the Le Mans 24 Hours this year one of the team's Lola-Toyotas won the unofficial LMP1 petrol classification, with sixth place overall. The team will be in action again this week at Estoril in Portugal for the finale of the Le Mans Series, with the target of winning both the Teams' and Drivers' championships.

"I am very pleased for all the Rebellion Racing members and fans to achieve such an incredible result. Winning the Manufacturers' Championship in the first year of our relationship with TMG, and also for the last year of LMP1 cars in the Le Mans Series, is a great reward for all parties involved. I am extremely happy for what Bart and the whole team have achieved this year thanks to their dedication, professionalism and efforts. I am sure that Hugh would be proud of them. I would like also to thank the drivers; Nico, Neel, Jean-Christophe and Andrea for the wonderful job they have done this year in the LMS. Now we have to stay focused on the last leg of the LMS where Teams' and Drivers' titles are still to be settled and battling against the immense Pescarolo team is no small job."

"We are delighted that we have won the LMS Manufacturers' Championship for Lola-Toyota in the first year of our collaboration. This achievement is the best way to establish a strong and long term relationship. I would like to include Michelin in the Manufacturers' Championship win, they have provided us a first class service all year with quick, consistent and durable tyres."

"The Le Mans Series LMP1 Manufacturers title is just reward for the skill and dedication of every Lola, TMG and REBELLION engineer and team member. It is especially rewarding to work with professional customer teams such as REBELLION Racing and engine suppliers such as TMG, who like Lola have a meticulous approach to the LMP1 programme."

"Congratulations to the REBELLION Racing team on this great achievement. We are proud to share the Le Mans Series Manufacturers' Championship title with Lola. From the beginning, our cooperation with REBELLION and Lola has been very fruitful and a great experience for everyone involved. Now we will keep our fingers crossed for the last race in Estoril where hopefully REBELLION can finish the season by securing both the Teams' and Drivers' Championship titles."