A near-faultless run in Round 4 of the Le Mans Series; the Silverstone 6 Hours, was rewarded with fourth place at the flag for Tommy Erdos, Mike Newton and Ben Collins in the RML AD Group HPD ARXC-01d.

A podium looked on the cards, and Ben was holding third when a length of Astroturf became wrapped around the front of the car. The team had to remove the offending fabric during a late splash’n’dash pitstop, adding critical seconds to a very tight margin. 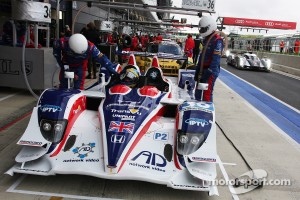 The performance remains one of the best of the season for the team, matching the fourth place achieved at Le Mans in the 24 Hours, but it left Mike Newton and the other drivers feeling frustrated. “The car ran totally reliably and we had a smooth, untroubled run,” said Mike, CEO of AD Group. “It’s just a fact we have to accept, that even when everything goes well, the deficit we face against the cost-capped cars, with their greater power and lighter weight, ensures that we can’t compete on a equal terms. We have to drive the car to the limits, simply because there’s nothing in reserve. In effect, we rely on the others to hit problems. It’s just too much of a disadvantage.”

The race had started well, with Thomas Erdos working through from class eighth on the grid to third. A stop-go penalty for a technical infringement, incurred before the start of the race, cost around 100 seconds, including time lost driving in and out of the pitlane, and knocked the car back several places. However, a solid anchoring stint mid-race from Mike Newton, followed by a hard push from Ben Collins (including a fastest race lap for the #36 HPD) saw the team back up to third – and then the Astroturf struck.

“I picked up the Astroturf at Homebase. Apparently, they’ve opened a new depot at Vale!” joked Ben. “At first I thought I’d broken the suspension, because the handling was very strange. I came into the pits, and the boys kindly ripped it off, but in the meantime I’d shredded the front tyres. When I’d started my stint and the tyres were fresh, I was really on the pace, but the balance of the car changed after my first pitstop, and from then on I was fighting understeer. I started to feel really frustrated, knowing there was so much more potential in the car. All that promise deserved a better result.”

RML did a fantastically solid job to bring the car home so close to the podium,” said Pauline Norstrom, Director of Motorsport and Marketing at AD Group. “RML AD Group is a winning team. They have the track record to prove that they’re experienced and professional enough to warrant good results, but this is the best we’ve had in the Le Mans Series all year. There’s little doubt that the car is handicapped by the regulations, and as two-time title winners in the Le Mans Series, the guys in the team deserve representative results. At AD Group, we’re inspired by the work they do, and our guests are totally in awe of what Phil Barker and his squad achieve for us. We’d just like to see them suitably rewarded.”

The team’s Number One mechanic, Vince “Vinny” Mitchell, was taken seriously ill just before the race weekend. “We were looking strong for a podium this weekend,” admitted Tommy Erdos. “We would have liked to have done that for Vinny, but it wasn’t to be, not today.” The team would like to wish Vince well for a full and speedy recovery, and we look forward to seeing him back in the squad as soon as possible.