Co-driver Matt Griffin started the race and drove superbly the first two hours before turning the car over to Johnny Mowlem with the class lead. Mowlem extended the lead before winning by 61 seconds.

Johnny Mowlem made it two wins in three European Le Mans Series races as he and his RAM Racing team-mates won the 3 Hours of Red Bull in Austria. 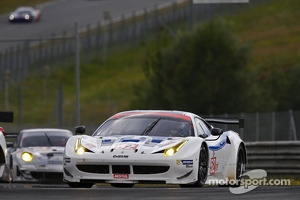 The team’s two Ferrari 458 Italias compete in the LMGTE class. On race day morning, Mowlem qualified his car third on the class grid, the team having decided to give up a few tenths and qualify with hard compound tyres, given the high ambient and track temperatures anticipated for the race afternoon.

Co-driver Matt Griffin started the race and drove superbly the first two hours before turning the car over to Mowlem with the class lead. Mowlem extended the lead before winning by 61 seconds.

“When I got in, it was a matter of maintaining a quick lap time and I was focused on pulling out a good gap to Bertolini behind me,” Mowlem said. Mowlem added, “The team was spot on and I really enjoyed this race and my little battle with Andrea Bertolini in the factory Dunlop Ferrari.

Our Michelin tyres held up extraordinarily well, but even so we were glad that we made the decision to qualify and race on the hard tyres. My engineer Mark Schooman had to work for his supper this weekend and he got everything spot on!”

The team’s other car, driven by Gunnar Jeannette and Frankie Montecalvo, finished third in class.

Three races into its first season, RAM has its cars at the head of the LMGTE standings. Mowlem and Griffin lead and the Jeannette/Montecalvo pairing sits second.

“Obviously, we’re very happy to be leading the championship at this point, and even more so because the team currently holds first and second ” Mowlem said. “But the cars in this class are very close. We have a lot of work to do yet.”

The next race in the ELMS will be Sept. 14 at the Hungaroring and will also be broadcast live on TV, the details of which will follow shortly.