© 2021 Motorsport Network. All rights reserved.
TV Tickets Fashion Giorgio Piola Jobs
Previous / With an ORECA chassis at Hungaroring, the Alpine A450 takes its first victory! Next / Hat trick for Hirsch and Chatin at the 3 Hours of Hungaroring
European Le Mans Race report

Jonathan Hirschi: “The team was faultless all weekend and we’re all happy and confident going into the final race.”

Hungaroring - Murphy Prototypes has finished in second place in the penultimate round of the European Le Mans Series (ELMS), the 3 Hours of Hungaroring, with Jonathan Hirschi (CH) starting the race from pole position and Brendon Hartley (NZ) setting the fastest lap of the race. 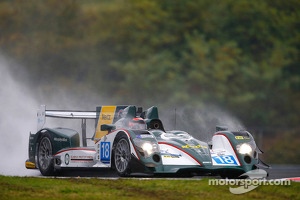 The team started from pole thanks to an impressive qualifying session from Hartley yesterday (13 September).

The New Zealander once again proved his class and asserted his position at the top of the highly competitive LMP2 grid when, despite the treacherous conditions, he recorded a lap of 2:09.30, two seconds faster than the second placed car.

At 1600hrs today, team-mate Jonathan Hirschi started the race on the wet Hungaroring circuit and defended an attack from the second placed competitor to maintain the lead position at the end of the opening lap. However, the Swiss was under pressure and, not wanting to risk damaging the car in the wet conditions, was forced to surrender three positions during the next hour and a half.

At the halfway mark, Hartley took over and quickly began hunting down the third placed car in front. Quickly setting the fastest lap times, up to four seconds per lap faster than the lead cars, he soon took the position and set about hunting down the two front runners.

On a charge, Hartley was unstoppable, and lap-by-lap closed the gap on the leader and passed the second placed car in the process. However, despite an incredible drive, the 23-year old ran out of time and, having reduced the deficit to the leader from 1 minute 23 seconds down to 42 seconds, finally crossed the line in second place.

“Obviously I’m delighted with the podium but I wanted the win,” comments Hartley. “Jonathan made a really good call to start the race on wet tyres and did a great first stint. However, we were caught out by the track conditions and our competitors were able to benefit from an ideal tyre compound.

“When Jonathan handed over, I hopped in and pushed for the whole race. I knew it was a big gap but anything can happen in racing. The lead car could have had a problem and end up the pits - it could come have down to a few seconds. I made good progress but ran out of time.

“The team was faultless all weekend and we’re all happy and confident going into the final race.”

Hirschi adds: “For me it was difficult to start from pole position. When you start from pole it’s not easy to manage, especially in bad conditions. I had a good first lap and the Dunlop tyre did well in the wet. I’m happy with second place – it’s my best ELMS result yet.

“Congratulations to Brendon – he has been fantastic all weekend. The team has done a great job too. I just hope that we can go one step up the podium at the next race.”

“This is the team’s best result to-date so were are understandably delighted,” comments Greg Murphy. “I want to thank all the lads in the team for working so hard all weekend and for our fans and sponsors who have supported us all season.”

The team next takes to the track at Paul Ricard for the final round of the European Le Mans Series on 27/28 September.

With an ORECA chassis at Hungaroring, the Alpine A450 takes its first victory!

Chandhok returns to ELMS with Murphy at Spielberg

Murphy Prototypes at Le Mans 2016: the Pluck of the Irish