Team Oreca Matmut has set the early benchmark in the Le Mans Series, as the French squad topped the time charts in official pre-season testing at the Paul Ricard High Speed Test Track. Former Formula One star Olivier Panis turned a 1:40.903 second lap time Monday morning, clocking the quickest time over the course of the two-day test in the south of France. 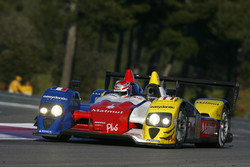 Oreca's two Courage-Oreca LC70E AIM prototypes each had a different agenda heading into the test, with the No. 10 machine of Stephane Ortelli and Soheil Ayari focused on endurance runs, covering over 3,000 kilometers. Panis and Nicolas Lapierre in the No. 11 machine tested out new brakes and an evolution of its new AIM V10 engine.

"The test's gone off very well," Panis said. "Running with the other cars gives us a good idea of where we stand. There's still work to be done but we're now starting to use the car's potential. We're getting to understand it better and better and the new engine's an improvement at high revs. Overall, it's very positive both from a development and reliability point of view."

The Hugues de Chaunac-led team, though, had a surprise in store on Sunday, as Formula One prospect Bruno Senna turned laps in the No. 10 machine. It was the young Brazilian's first experience in a prototype, and while he admittedly wants to follow in his late uncle's footsteps to F1, Senna is not ruling out a possible future drive in a sports car.

"Coming here I've discovered a totally different world, and I feel I'm a better driver for it," Senna said. "This test has been very enriching. The team asked me to help with the set-up work and I had to manage tire and fuel consumption. I did my first-ever night stint! It's all very different to what I've known before, and I really appreciated this experience. I liked it and I'd love to do it again! While my aim is still to do Formula 1, I said to myself that long-distance racing could be something really great."

Both Courage-Orecas were running the 2008-spec rear wing, which some say provided the cars with an advantage over the new narrower wings most of the other prototype contenders were using. Either way, all teams will have to convert to the new wings before the series-opener at Barcelona on April 5. 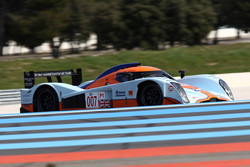 The other big story of the weekend came from the Aston Martin Racing camp, which debuted its Lola Aston Martin LMP1 coupes, although one was short lived. Tomas Enge crashed the No. 007 heavily on Sunday afternoon, bringing the test to an early end for he and co-drivers Jan Charouz and Stefan Mucke.

"Considering how short a time the team had to build up the two cars we were running really well without any major problems," Enge said. "Unfortunately because of my error the test was compromised but prior to the accident the car was good and I believe that we will be even stronger than we were last year."

However, the team's No. 009 entry of Darren Turner, Harold Primat and Miguel Ramos stayed in one piece and gained valuable track time over the two days. Both cars were only assembled days before the test in a race around the clock and lacked any initial testing before heading to Paul Ricard.

"It's a credit to the team that both of our cars have run so reliably after such an intense and tiring build period," said team principal George Howard-Chappell. "For a first test with two brand new cars we have run very successfully. Obviously the accident has set us back to a degree but as always we will recover and we will be in Barcelona with two race-ready cars. I am pleased that the new drivers are getting to grips with the car and are integrating well with the team and the 'old hands' are also performing well."

The two factory Aston Martins set the third and sixth quickest times, but last year's Lola Aston Martin in the hands of Speedy Racing Team Sebah beat them both. Marcel Fasseler turned a 1:42.141 lap time in the silver and red machine, which Neel Jani and Nicolas Prost also got time in.

Absent from the test were the obvious diesel-powered entries from Peugeot and Audi, although neither will enter full-season factory entries. Instead, Colin Kolles will enter a pair of customer Audi R10 TDIs in the five-round championship, while Peugeot has confirmed that it will enter all three of its 908 HDi-FAPs at the Spa-Francorchamps round as a warm-up for the 24 Hours of Le Mans in June. 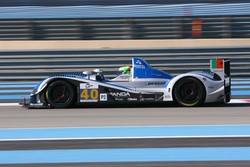 In the LMP2 ranks, Guy Smith turned the quickest time of the test in the new Quifel-ASM Team Ginetta-Zytek 09S, clocking a 1:43.355 second lap time. The Dyson Racing regular will join team veterans Olivier Pla and Miguel Amaral in the car at Le Mans.

Essex Racing, the lone Porsche RS Spyder at Paul Ricard, was second quickest in the hands of Dane Casper Elgaard and Porsche works driver Emmanuel Collard. Elgaard, though, brought the team's test to an early end after spinning into the barriers on Monday morning.

Chris Dyson, newly appointed third driver for RML's Le Mans attack, was seen behind the wheel of the team's Lola B08/86 Mazda for the first time, getting acclimated to the closed-top prototype for the twice-around-the-clock endurance classic. But by the time June rolls around, Dyson will have plenty of racing experience of a Mazda MZR-R-powered Lola under his belt, as Dyson Racing embarks on the ALMS season with a pair of similarly prepared cars.

Only four GT1 cars showed up for the test, with the IPB Spartak Racing Lamborghini Murcileago leading the way. ARC Bratislava-Kaneko brought two Saleen S7-Rs but only will race one in the season. Luc Alphand Aventures, which recently announced its return to the Le Mans Series, had none other than Corvette Racing factory ace Olivier Beretta at the wheel of its Dunlop-shod Corvette C6.R.

Hankook led the way in the GT2 category. Yes, that's right. For 2009, Farnbacher Racing fields three Ferrari F430 GTs, all on different tires, and the Korean-shod Prancing Horse proved to be the quickest at the end of the two days.

Pierre Kaffer, who just inked a deal to race with Risi Competizione in the ALMS this season, set the time of 1:57.888 seconds, edging out Marc Lieb in the Team Felbermayr Proton Porsche 997 GT3 RSR by a tenth of a second.

Twenty-eight cars in all took time, including a mixed variety of GT2 contenders such as the new Reiter Engineering Lamborghini Gallardo and Drayson Racing's Aston Martin Vantage GT2. Those two cars, along with four-dozen more entries, will be in Barcelona in one month's time for the season-opening round on April 3-5.

Series more and more involved in the "Green Caring"