After 6 hours of racing, it was the Pescarolo Team who earned the honor of winning the Le Mans Series 2011 opener at the 6 hours of Le Castellet. Pescarolo made their comeback to sportscar racing at Paul Richard HTTT circuit after being absent last season. With the exception of starting the race from the back of the grid due to the disqualification of their qualifying time, the team had no other major issues over the weekend.

It's better than a dream.

"It's better than a dream," said team principal Henri Pescarolo. "We haven't raced for over a year. The last time was in China in 2009 and we won. On our comeback we've won again! It's incredible! I was delighted to see Manu (Collard) and Jean-Christophe (Boullion) battling out on the track, and not just because they were team-mates and Le Mans Series Champions with me!"

They managed to stay out of trouble during the race and were the lucky ones during the first "start" confusion as the Safety/Pace car was still on track as the field headed to the front straight when the lights went from red to green to signal the official race start. No explanation has been given but several cars were crashed out or had damage.

Pescarolo was actually leading the race after the first hour while their competitors were racing early trouble. Team drivers Emmanuel Collard, Christophe Tinseau and Julian Jousse kept the car with Judd power in the front to score the overall and LM P1 class victory.

"It's a great result after a year off racing. But I'm rather surprised with this performance. The car was perfect in terms of reliability and speed," said Emmanuel Collard.

LM P1: The other favourites 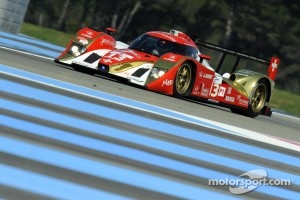 Rebellion Racing Lola-Toyota #12 pole winning car of Neel Jani/Nicolas Prost due to sudden drop of pressure off the gearbox and #13 car of Jean-Christophe Boullion and Andrea Bellichi with a door fixation problem.

Quifel-ASM Team with drivers Miguel Amaral/Olivier Pla had their own trouble. After setting a good qualifying time, their good progress was doomed in the first hour when their car ended up having a puncture and the checks for damage took precious time in the pitlane. In the end, the #13 Rebellion Racing finished the race in 2nd place, one lap down from the winning Pescarolo Team, while their sister car, the #12 managed to came home 7th overall (3rd in class). Quifel-ASM made a decent run and finished 8th overall (4th in class).

Rebillion's Boullion commented, "It's a pity we had that door problem at the start of the race. Today, the car's setup was much better. I enjoyed driving it and it was very quick. My scrap with Manu was also great fun!"

The win in LM P2 who also finished 3rd place overall went to Greaves Motorsport with their drivers Tom Kimber-Smith/Gary Chalandon/Karim Ojjeh in their Zytek Z11SN Nissan. The team was fighting very hard during the whole race with many challengers. At the early stages the Nissan powered Oreca 03s of the polesitter TDS Racing Matthias Beche/Pierre Thiriet/Jody Firth and Boutsen Energy Racing's Dominik Kraihamer/Nicolas De Crem were remaining in front but both of the teams were facing problems during the mid point of the race.

"We've made a fantastic start to our season; I wasn't expecting such a good result," Chalandon said. "I've got two great team-mates Karim (Ojjeh) and Tom (Kimber-Smith) who helped me and made a big contribution to this result."

The problems for the top three actually gave the lead to Strakka Racing ARX-01 HPD of Danny Watts/Jonny Kane/Nick Leventis, who had been doing a brilliant job but in the end, even their team was having small troubles that dropped their team behind both Greaves Motorsport and Pecom Racing's Lola B11/40 Judd.

We've made a fantastic start to our season.

Pecom Racing with drivers Matias Russo, Luis Perez Companc and Pierre Kaffer came home 4th overall and 2nd in LM P2, finishing the race on the same lap as the class winners. Strakka Racing had to settle for 3rd place in class and 5th overall but its an awesome result, considering the slow pace of the whole weekend and small advantage they are giving their rivals due to selection of the car with the new rules.

The Formula Le Mans class also had their own battles and in the end it was Pegasus Racing's Mirco Schultis/Patrick Simon/Julien Schell who finished 1st in class and 12th overall and caused a small upset to Genoa Racing (Jens Petersen/Christian Zugel/Elton Julian). These two teams were pretty much the only teams in the Oreca FLM class that managed to stay out of bigger problems while their rivals were spending a lot of time in the pits, repairing their cars or forced to drive at a slower pace.

Schell said after the race: "We're pleased to be at the finish of the race and in first place, what's more! We were off the pace in practice and we managed to improve the car's performance for the race. We were consistent and it paid off!"

LM-GTE: A starting mayhem and the win for JWM Motorsport Ferrari

Before the race started, the LM GTE battles were meant to be very interesting ones. Ferrari's AF Corse team (Gianmaria Bruni/Giancarlo Fisichella) had the pole with the Young Driver AMR team of Tomas Enge/Alex Muller second on the class grid with the Porsche teams slightly behind but as always were still looking to have a strong race. However, the excitement ended up with a bit bad taste at the start of the race when for some reason the lights were turned green but the safety car didn't pull odd the track. After a heavy acceleration of the prototypes in front prior too their quickly getting off power while most of the midpack teams, especially the leading LM-GTE cars didn't had any time to react causing a huge collision at the main straight leading into the first corner.

Eliminated were the top Porsche teams including the #76 IMSA Performance Matmut, Team Felbermayer Proton and Prospeed Competition. Plus damage to many LM-GTEs including JOTA's Aston Martin Vantage who were seen stopped on the track or limping to the pitlane. The first start was obviously flagged but some of these teams didn't had a change to repair their cars and were forced to retire from the race or end up laps down due to repairs.

When the race finally got going, Ferraris were in controlled the entire race. AF Corse led most of the time but in the end it was the JWM Motorsport Ferrari F458 Italia who took the victory with drivers of Rob Bell and James Walker who also took 14th overall, just behind the two top Formula Le Mans cars. AF Corse had to settle for second in the LM GTE Pro class.

"We're delighted to have won after a great scrap out on the track. I knew that the no. 51 AF Corse car still had another pit stop to make, but I had an opportunity to overtake it which I grabbed with both hands! This win is a great reward. My thanks to the team and to Dunlop, which did a huge job before the start of the season," Bell said.

LM-GTE AM was won by Team Felbermayer Proton who took the lead from the #61 AF Corse Ferrari at the 2nd hour. Team Felbermayer entry of Horst Felbermayer Sr. and Jr., and Christian Ried were also the best finishing Porsche (1st in LM GTE AM class, 3rd in LM GTE and 17th overall) and only three laps behind the LM GTE winning Ferrari.

Reid commented, "The car was perfect and everybody did an incredible job. But we're not over the moon as we're disappointed that our sister car did not finish in LM GTE Pro."

The story of the weekend: The slow pace of Aston Martin LM P1

The story of the weekend still has to be Aston Martin Racing. Everyone was expecting them to be at pace and the recent promising testing feedback raised high hopes that the team could take the fight at the 24 Hours of Le Mans to Peugeot and Audi. The new AMR-One car managed to surprise the fans but not surely with the way Aston Martin Racing had hoped for. The car was very slow in the hands of drivers like Harold Primat, Stefan Mucke and Tomas Enge who are all very capable sportscar drivers. Can they bounce back or will this be the season to forget? Only the time will tell as its still too early to say. One thing is still very sure, AMR has to fix it and fast. Especially by the next event which is the final one before the prestigious 24 Hour race in France. The main target of the year is just a few months away.

George Howard-Chappell answered the questions and concerns by stating, "This weekend has provided valuable progress to our development programme. We have taken advantage of testing under race conditions with better understanding of how the car behaves in traffic and on/off the racing line. We have solved some inevitable teething problems, and begun to concentrate on the dynamic characteristics of the car. I must stress how early we are in the development process and we go home now to continue in preparation for Le Mans Test later this month."

Round 2 of the LMS will take place at Spa Francochamps May 5th-7th. It's also the second round of ILMC (Intercontinental Le Mans Cup).