Set up gamble puts team in a strong race position.

After another very tight qualifying session, where only four tenths of a second separated the top five cars, Ram Racing’s two Ferrari 458 Italias will start this afternoon’s 3 Hours of Red Bull Ring in 3rd and 6th positions on the LMGTE grid. The third round of the 2013 European Le Mans Series begins at 16:30h this afternoon. 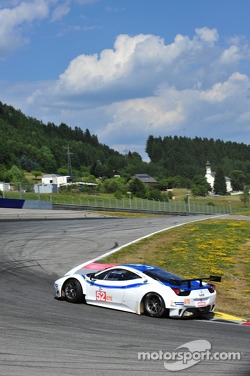 Current LMGTE points’ leader Johnny Mowlem (together with his team mate Matt Griffin) was tasked with qualifying the No.52 entry and set a fastest lap of 1:29.629 to claim third place. The British driver held the top spot for some minutes within the session, but was pipped to pole by the No.77 Proton Porsche of Nick Tandy in the final stages.

North America’s Gunnar Jeannette drove by far his quickest laps of the weekend to claim fourth place at the chequered flag, just one tenth behind Mowlem with a best time of 1:29.780. However, Jeannette’s fastest three laps were deleted for exceeding track limits and he will now start from 6th place on the class grid.

After just two hours of practice yesterday, during which time the drivers were familiarising themselves with track layout, the four drivers and their engineers set to work to analyse all the data and work on improving the cars’ set up for better balance and grip. A big step forward was made Imola race-winning team is confident that they will be in a strong position for this afternoon’s event.

Johnny Mowlem, No.52 Ram Racing Ferrari 458 Italia (qualified P3 LMGTE): “In any qualifying session you always want to be fastest; sometimes that’s unrealistic but, in this particular instance, a shot at pole was possible. I just had one of those horrible, scrappy sessions, with traffic each lap after my tyres had come in which didn’t allow me to get all my sectors tied up. I then got a reasonable lap together which put us in P1 at the time.

“The team did a fantastic job and gave me a great car. Our chosen tyre strategy meant it took a bit longer for them to come up to temperature in qualifying, but we are sure it will pay off for us in the race. If you have a really scrappy session and still end up P3, you should be quite pleased and I think we’ll be in a good position for this afternoon. Matt’s going to start and if he stays out of trouble in Turns 1, 2 and 3 on the first lap, then I’m confident we’ll have a good result.”

Gunnar Jeannette, No.53 Ram Racing Ferrari 458 Italia (qualified P6 LMGTE): “The car and driver were vastly improved overnight! We made a couple of changes to set up last night which definitely helped and that, combined with having now had a few laps around here, meant we were in good shape.

"Unfortunately I was a little too eager to go out too early to get some clear track. We had that but in the end came up a little bit short – on my last lap I was up two tenths of a second and caught a yellow flag. We are starting 4th which is still a good spot and the most important thing is that we have a really good race car.” [Quote given before lap times were deleted].

Fans can watch Round 3 of the European Le Mans Series from the Red Bull Ring in Austria on MotorsTV in Europe and around the world on the official ELMS website. The coverage starts at 16h20 (CET).