Sébastien Loeb Racing, a humble return to endurance at Silverstone

Sébastien Loeb Racing begins its third season of existence with the European Le Mans Series’ kickoff at Silverstone. Alongside the No.24 ORECA 03 handed over to Vincent Capillaire and Jan Charouz, the Audi R8 LMS ultra will also be on track with Henry Hassid, Olivier Lombard and Mike Parisy at its wheel. The Alsace-based team thus begins its journey towards the 24 Hours of Le Mans.

After two races in 2012, including a podium at the 6 Hours of Le Castellet, Sébastien Loeb Racing is glad to return to the European Le Mans Series. With around 40 contenders, the championship is popular. This year the team co-founded by Sébastien Loeb and Dominique Heintz will be competing in two categories : LM P2 and GTC. Two philosophies with some common values : humility and ambition in order to meet the first challenge of the Endurance programme.

"We are approaching this first round with much humility" confirms Technical Director Léo Thomas. "We are happy to come back to prototype competition, we want to do well and everybody is very motivated. That being so, it is all about returning to LM P2 and we know how difficult and demanding that class is. This is not a dress rehearsal because we are already in the competition and there are some important points to score. But there will also be many discoveries for the team to handle. We will be one of those teams competing with two drivers only in LM P2 : therefore Vincent and Jan will benefit from more time on the track and will get even more familiar with the car. Perhaps it will also offer us a little bit more freedom strategy wise. In theory we have some assets, we will have to make a good use of them quickly so that we can be in the game straight away. We want to achieve a good place on the ranking. It is an important kickoff and the 24 Hours of Le Mans are in our sights."

Vincent Capillaire : « So glad to drive such a car at Silverstone »

With teammate Jan Charouz, 2009 Le Mans Series Champion, Vincent Capillaire will have his baptism of fire in LM P2. "We have had the opportunity to prepare ourselves properly with several test sessions" says the driver from La Sarthe who defends SO24!’s colours. 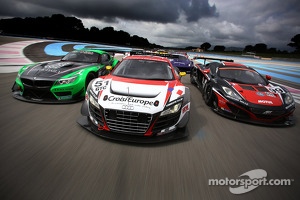 "We have a strong package, an excellent car, a good torque motor and Michelin tyres. Jan and I are making a good pair. He brings his own experience and performance to it. And we also get on very well. I am finally going to discover Silverstone and I am so glad to drive such a car on that circuit ! I will take up this challenge with humility just like the team does. Traffic will certainly be one of the key elements, we will have to be careful with that. The main aim is first to cross the finish line, avoiding all the obstacles. Secondly we are obviously also thinking of getting ready for the 24 Hours of Le Mans, one of the most important meetings of the year."

Competing in GT since 2011, Sébastien Loeb Racing will be entering its first race in the ELMS GTC class. It will also be its first competition with the Audi R8 LMS ultra. "Things are a little different with the Audi" says Léo Thomas. "We have all the assets needed to aim for a good result, a homogeneous trio with unquestionable qualities, a car that has shown its capacity and a fast technical team in the pit. However we have to take into account the performance balance, we will find out more in Silverstone."

« Mike Parisy : « We are great competitors »

Champion 2012 French GT Champion, Henry Hassid, LM P2 class winner of the 2011 24 Hours of Le Mans, Olivier Lombard and Mike Parisy - already a member of the team last year - will be sharing the wheel of the No. 51 Audi R8 LMS ultra.

"We have had the time to prepare the season well, driving lots and lots during test sessions" explains Mike Parisy, 2009 French GT3 Champion and 2011 European GT3 runner-up. "Test sessions have gone well, even though the official tests have left us a little uncertain regarding the performance balance for the first race. I definitely trust both the team and my teammates : we will start off strongly and will give the maximum in order to achieve a great result. I like the Silverstone circuit, I have often been successful there. It is a nice layout, with a succession of fast turns which can suit the Audi R8 LMS ultra’s chassis. That track really allows drivers to express their full potential. Henry, Olivier and I are getting to know each other and we are currently gathering momentum. The three of us are great competitors, just like the team is, and I think that those mindsets can lead us to big things !"

Alongside the ORECA 03 and the Audi R8 LMS ultra, entered in the ELMS, Sébastien Loeb Racing will also be involved in the French GT Championship as well as in the Porsche Carrera Cup France.