Perfection in qualifying is a wonderful thing, but it really doesn't count for much on race day, as Nicolas Minassian and Marc Gene found out again in today's 1000 km of Spa-Francorchamps, the fourth round of the Le Mans Series. Having started from ...

Perfection in qualifying is a wonderful thing, but it really doesn't count for much on race day, as Nicolas Minassian and Marc Gene found out again in today's 1000 km of Spa-Francorchamps, the fourth round of the Le Mans Series. Having started from pole in each race thus far, the pair came up empty again in today's classic endurance race, felled an hour into the race by a failed wheel bearing. 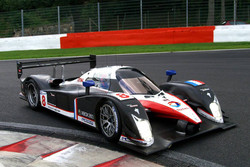 Instead, the victory went to their Peugeot Sport teammates, Stephane Sarrazin and Pedro Lamy, who took a comfortable two-lap victory in today's six-hour race, consolidating their championship lead. Sarrazin and Lamy now have three victories to Minassian's and Gene's singular one.

Second overall, but easily a second per lap slower than the Peugeots, were Jean-Christophe Boullion and Emmanuel Collard in the #16 Pescarolo Sport. The Pescarolo-Judd doesn't have the pace of the diesel-powered Peugeots, but the team has reliability figured out, and to finish first, one must first finish, as the old adage goes.

Pescarolo's closest challenger was the LM P2 entry of RML, with Tommy Erdos and Mike Newton finishing just a lap adrift of the French veteran team -- and first in the P2 class by a margin of four laps, an impressive showing for the privateer MG Lola AER entry.

What might have been a closer battle in the "senior" P1 class was nullified early, as the Charouz Racing Lola of Stefan Mucke and Jan Charouz was unceremoniously punted off Formula One-style, in the first corner of the race, the Jonathan Cochet in the Courage being the instigator. After some frantic repairs by the Charouz team, Mucke was able to rejoin, but with 15 laps lost, the team was able to only drive for championship points. Eventually Charouz crossed the line in 7th in P1 and 25th overall, while in some form of poetic justice, both Courage cars abandoned the race by the 23rd lap.

"Obviously, I did not expect the hit," Mucke recounted the incident. "I do not even know who ran into our car. Immediately after the accident I thought no problem and I should be easily able to cruise to the pits. However, I soon realized that it would not be that easy. Both rear tyres were gone and I had to drive on the rims only. It was not only difficult but also very, very slow!"

In another sign of a grueling endurance race, the top two P2 finishers -- RML and Quifel ASM Team (Miguel Amaral, Miguel De Castro and Angel Burgeno) were split by the winner of the LM GT1 class, Stefane Ortelli and Soheil Ayari bringing home their Team Oreca Saleen S7-R in sixth place overall, and a lap ahead of the ASM Lola AER. 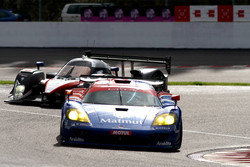 As in qualifying, the speed of the Saleens was untouchable, and it was left to Alphand Aventures' Corvette C6.R and the Aston Martin DBR9s of AMR Larbre and Team Modena to fight over the scraps. While Racing Box had to abandon the chase after little over an hour with a brake failure, Ortelli and Ayari did not miss a step in taking the class victory, dismissing an early challenge from the Aston Martins with confidence.

Behind them, and in eighth overall, were Christophe Bouchut, Gabriel Gardel and Fabrizio Gollin for AMR Larbre, who won the battle of the big bruisers, edging the Corvette by just a lap. Team Modena's DBR9 was just another 18 seconds behind the Alphand Aventures C6.R.

The LM GT2 victory was also claimed by the dominant team of the weekend -- Felbermayr-Proton. The duo of Marc Lieb and Xavier Pompidou was steady at the lead of the class for much of the afternoon, but it was touch-and-go for a moment, when it looked like the Porsche 993 GT3 RSR pilots might have thrown victory away.

Just after the halfway point of the race, the Felbermayr car was attempting to make its way past the #83 GPC Sport Ferrari F430, when the GPC car moved to block the way. The Porsche swerved back -- only to smash into the Horag Lola, which was attempting to lap the pair. As it happened, the damage was minor, and the loss of time was not much worse than the three-minute stop-and-go penalty assigned to GPC Sport.

The series returns in four weeks time with another endurance classic, this time on the Silverstone Circuit.