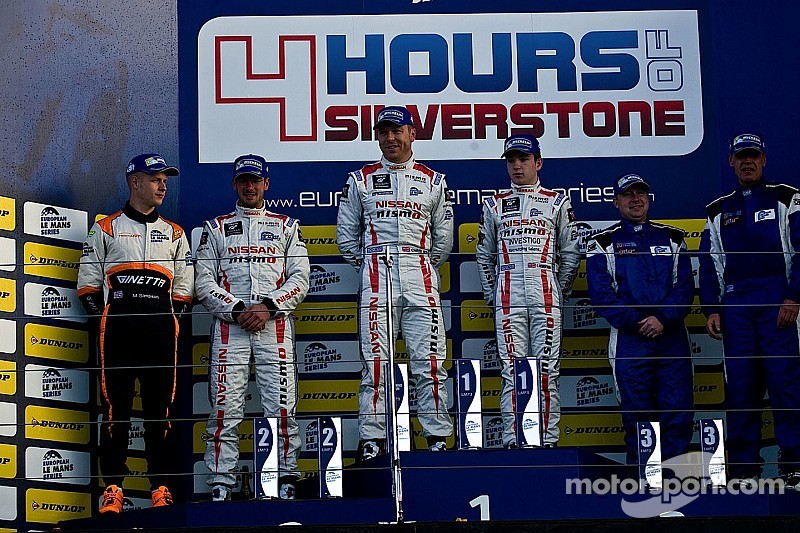 SILVERSTONE, UK – Sir Chris Hoy and his team-mate Charlie Robertson took a class victory in the opening round of the European Le Mans Series at Silverstone today. This was Hoy’s first win in international motorsport and his first win with Nissan.

Driving the #3 Ginetta-Nissan in the four-hour race, Hoy and Robertson took a brilliant victory, setting the pace for a stunning new season of Le Mans racing. This race marks the next step on Hoy’s road to the 2016 Le Mans 24 Hours with Nissan.

It was Robertson who took the start in the #3 car and he made a great getaway from the back of the grid, setting Hoy up for the drive of his life in the middle stint of the race. Behind the wheel for almost two hours, Hoy learnt a great deal about the nuances of endurance competition.

It’s a stepping stone towards competing at Le Mans as it bridges the gap from GT3 to the LM P2 car...

“I knew we had a good chance of making the podium when Charlie got that great start and extended the lead,” said Hoy. “I knew I had to hang onto it. I had some scary moments – a couple of spins when the tyres started to go off – but other than that I had a great time and I really enjoyed it. It’s the longest stint I’ve done in a racing car and I have the new challenge of the GT cars and the P2 cars around me too. Everything was new to me and it was an amazing experience. The car is great to drive, especially when it’s on fresh tyres and for a novice like me to be able to come and race it, it shows how well the car is built.”

In the #2 sister Ginetta-Nissan, 2014 GT Academy Europe winner, Gaetan Paletou came home in second place on his LM P3 debut with his team-mate Mike Simpson. Paletou made a late switch to LM P3, a decision that paid off for Nissan when he showed off his talents in today’s race, only a few months after winning Nissan’s virtual-to-reality competition.

The debut of the LM P3 cars, which are exclusively powered by Nissan, has been a great success for everyone involved and the new category looks set to become an important step on the sports car racing ladder.

“It’s a stepping stone towards competing at Le Mans as it bridges the gap from GT3 to the LM P2 car that I want to race at Le Mans,” explained Hoy. “I’m just trying to take in as much information and experience as I can from guys like Charlie and from GT Academy and this has been a great start!”

“The Hoy done good!” said Nissan’s Darren Cox. “NISMO has been on a rollercoaster recently. This win for Chris, Charlie and Ginetta-Nissan gives everyone a massive boost. Nissan has once again supported talent and motorsport. Making the commitment to take an Olympian to Le Mans and supply engines for a brand new unproven category continues to show that we innovate and take calculated risks to push this sport on. I want to extend my huge thanks to all at Ginetta cars for making an early commitment to this championship. This partnership will grow and grow.”