Pierre Thiriet, Ludovic Badey and Tristan Gommendy never relaxed the pressure and took the lead in the race less than six minutes from the chequered flag!

This year Onroak Automotive is represented in force in the European Le Mans Series with no fewer than four Morgan LM P2s. After a suspense-filled opening round, French team Thiriet by TDS Racing gave the Le Mans-based constructor its first victory of the season backed up by the excellent third place of Swiss outfit Newblood by Morand Racing.

British teams and constructors put up stiff resistance on their home turf at Silverstone, but Pierre Thiriet, Ludovic Badey and Tristan Gommendy never relaxed the pressure and took the lead in the race less than six minutes from the chequered flag! Another Morgan LM P2 entered by Newblood by Morand Racing rounded off a perfect day for the French constructor Onroak Automotive with third place on the podium. 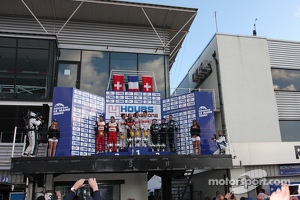 The opening round of the ELMS, a curtain-raiser to the first heat of the FIA World Endurance Championship, attracted a big field of 38 cars for the 4-hour race. This year quality and quantity are both present with a host of top-class drivers guaranteeing a great show for the spectators. On the grid, the Thiriet by TDS and Newblood by Morand Racing Morgan LM P2s shared the third row. The cars entered by Larbre Competition and Pegaus Racing were a bit further back in 10th and 11th places.

No team dominated the race and the outcome was always in doubt. The main victory contenders went at it hammer and tongs out on the track and rivalled in daring in terms of strategy. Among these parameters tyre management as well as the right moment and time in the car of the Bronze and Platinum drivers according to their grade played a crucial role. This was the case after the safety car pulled off following leader Simon Dolan’s heavy crash, which re-released the field with 22 minutes to go to the flag. Tristan Gommendy, the Platinum driver in the Thiriet by TDS Racing trio was in second place in the no. 46 Morgan-Nissan LM P2 but on worn tyres; he was on the tail of a Silver rival who had begun his stint on new rubber.

With five laps to go the adrenaline shot up several notches on the exit from Copse Corner. Gommendy made some opportunistic moves in traffic and snatched the lead in his Morgan-Nissan LM P2 on Dunlop tyres to head on to victory. In his wake Gary Hirsch who took over from ex-F1 driver Christian Klien, and Romain Brandela, in the Morgan-Judd LM P2 entrered by Newblood by Morand Racing also on Dunlops tried to take second place under braking for the Vale chicane. To no avail, but the drivers in no. 43 held on to third under a second behind the second-placed car!

The Larbre Competition Morgan-Judd LM P2 on Michelin tyres driven by Keiko Ihara from Japan and Colombian Gustavo Yacaman saw the flag in ninth place in the category after being hit with several glitches. No. 50’s race almost ended in a brutal shunt when Dolan, who lost control of his car and his hopes of victory, tagged the rear of the Morgan LM P2 with Yacaman at the wheel. After several high-speed spins it was able to rejoin although it suffered damage in the incident.

The Pegasus Racing Morgan-Nissan LM P2 with Dunlop rubber driven by Julien Schell, Niki Leutwiler and Jonathan Coleman was in a position to clinch seventh spot until a radio problem led to it missing a refuelling stop: the Nissan engine died as it ran out of petrol on the exit from the new section, the Loop.

The next round of the European Le Mans Series will take place in Italy on 17-18 May on the Autodromo Enzo and Dino Ferrari at Imola.

No. 46 - Xavier Combet, Thiriet by TDS Racing team manager: “It was a thrilling race as we had to control the speed and above all the traffic. It wasn’t easy with so many cars so closely-matched in terms of performance. The gaps could open up or close very quickly. I’d like to take my hat off to those who look after strategy in our team and also to the drivers who were able to put the car in the right place at the right time.”

No. 43 - Benoît Morand, joint-owner and team manager Newblood by Morand Racing: “It’s great to finish in the top three after what happened this weekend. We had two offs, one in free practice and the other in qualifying. As a result our third place is a good result. In the race the antenna went on the blink. We had no radio so we couldn’t ask Gary Hirsch to modify the engine mapping. The main thing is to see two Morgans on the podium. We’re in the running for the championship and we’ve still got four races to go!”

Jacques Nicolet, Onroak Automotive President: “For the constructor Onroak Automotive it’s been a very good day with victory and third place in the ELMS added to the pole in LM P2 in the FIA WEC. So overall it’s a great result for Onroak Automotive as the cars were both quick and reliable in the first round. I’d like to thank and congratulate for their work all the four teams, which have put their trust in us, and which today have given us a brilliant reward with this fantastic result.”