The defending champions maintain their advantage to cross the finish line first and in the process take their second consecutive win in the ELMS.

At the Red Bull Ring, in Austria, Thiriet by TDS Racing took its second consecutive win in the European Le Mans Series. After Imola, Pierre Thiriet and Mathias Beche took the spoils after a cool and composed race.

The two men finish ahead of the Alpine A450, also built and developed by ORECA. Longtime podium contenders, Race Performance finished fifth, ahead of SMP Racing, who made a successful debut in the category with their ORECA 03. Murphy Prototypes, author of the fastest lap with Brendon Hartley, and Boutsen Ginion Racing however both encountered racing incidents. 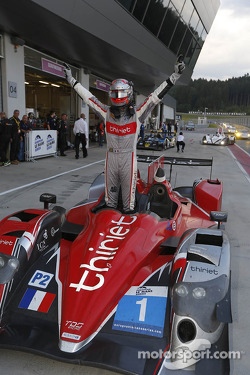 Pierre Thiriet (Thiriet by TDS Racing, ORECA 03-Nissan #1, 1st LM P2): "The race was not easy. The car was good, but the traffic was difficult to deal with. I also had to find the right balance between performance and risk : I decided to take less chances and I was able to manage the gap to the Alpine. As always, the team did a superb job and Mathias (Beche) also had two great stints. We decided to forget about Le Mans and this victory feels good. It motivates us for the future."

Xavier Combet (team manager Thiriet by TDS Racing, ORECA 03-Nissan #1, 1st LM P2): "We’re very happy to win again. After retiring from the 24 Hours of Le Mans, the team was affected but they showed they could rebound. We all have the ELMS as our primary goal and after this weekend, we can start aiming for a second championship title in a row. Pierre Thiriet had a fantastic stint.

He progressed a lot this weekend. He was quick in the practice sessions and he was again so in the race. Bravo ! Mathias Beche was his usual self, always at the top. Our off-schedule strategy was the right one. Our car had absolutely no issues even though we had to rebuild it completely after Le Mans : that shows the mechanics’ good work. This is a great win that we will savor !"


The start of the 3 Hours of the Red Bull Ring is animated and the ORECA 03 of Murphy Prototypes and Thiriet by TDS Racing provisionally lose second and third positions. Jonathan Hirschi and Mathias Beche waste no time in regaining the positions, while Race Performance stays in fifth place, followed by SMP Racing.

The fight is fierce in the top five and Thiriet by TDS Racing loses its third place a little before the first half-hour of the race, then losing position to a charging Patric Niederhauser a few minutes later. The four closest to the leader, the No.38 Zytek, are all running within a handful of seconds of each other before the first round of pitstops.

After those stops, Thiriet by TDS Racing rejoins the action in second place ahead of Race Performance. Boutsen Ginion Racing finds the sixth position, while Murphy Prototypes is forced into the garage after suffering from a melted starter cable. The leader is handed a stop-and-go penalty for speeding in the pitlane, giving Mathias Beche the lead, only seconds ahead of Niederhauser.

The running order doesn’t change until the halfway point, with Boutsen Ginion Racing and SMP Racing just outside the top five. After another round of pitstops, Thiriet by TDS Racing holds a solid lead. Race Performance loses two places after coming together with a GT. Meanwhile, Boutsen Ginion Racing loses several minutes after changing bodywork resulting from contact with another competitor.

SMP Racing continues to have a problem-free race. At the wheel of the No. 1 ORECA 03, Pierre Thiriet pushes hard to maintain his advance on the Alpine A450, a car built and developed by ORECA. Thiriet by TDS Racing pushes its final stop back and rejoins the fray in the lead with a solid lead over the Alpine.

The defending champions maintain their advantage to cross the finish line first and in the process take their second consecutive win in the ELMS. After a hard-fought battle, Race Performance finishes fifth, ahead of SMP Racing, who made an impressive debut. Ending the day seventh in LM P2, Murphy Prototypes distinguish themselves by signing the fastest race lap.