Mathias Beche and Pierre Thiriet were the victors in their ORECAO3 in Spielberg, Austria for the third round of the European Le Mans Series at the Red Bull Ring.

Mathias Beche and Pierre Thiriet at the wheel of Thiriet by TDS Racing ORECA03 finished the third round of 2013 ELMS season on the first step of the general podium at Red Bull Ring in Austria, ahead of n°36 Signatech Alpine of Pierre Ragues and Nelson Panciatici. Natacha Gachnang and Franck Mailleux driving n°43 Morgan Judd of Morand Racing climbed onto the third step of the podium. The overall podium was a carbon copy of the top three finish at round 2 held at Imola in May.

In the LMPC Category Gary Hirsch and Paul Loup Chatin win for the second time of the season at the wheel of Team Endurance Challenge FLM09 n°49, ahead of teammates Alex Loan and Nico Verdonck in the n°47 FLM09.Algarve Pro Racing FLM09n°46 claimed third place in the class on the series debut.

In the LMGTE category, Ram Racing sandwiched the n°66 JMW Motorsport Ferrari F458 Italia of Andrea Bertolini and Joel Camathias, with Johnny Mowlem and Matt Griffin in n°52 on the first place, and n°53 Ferrari of Gunnar Jeannette and Frank Montecalvo, third. 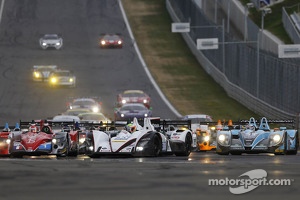 The race start was held under blue skies and warm sunshine as the n°38 Jota Sport Zytek of Oliver Turvey led the 26 car field into Turn One for the first time, closely followed by the n°18 Murphy Prototype Oreca of Jonathan Hirschi, the n°1Thiriet by TDS Racing Oreca of Mathias Beche and the n°43 Morand Racing Morgan of Franck Mailleux. Turvey set a good pace and soon opened up a three second gap to Hirschi as the Swiss driver had to fend off the attentions of his fellow countryman Beche.

In LMPC Soheil Ayari got a great start to move from 4th to 1st in class followed the n°49 FLM Oreca of Paul Loup Chatin. Ayari’s good run came to an end on the 4th lap when he was forced into the pits with a problem, promoting Chatin into the lead.

In LMGTE the pole sitting n°77 Proton Competition Porsche of Gianluca Roda was passed by the three following Ferrari’s and it was the n°66 JMW Motorsport 458 of Joel Camathias which led from the two RAM Racing Ferraris, with Gunnar Jeanette in the n°53 car fend off the attentions of Matt Griffin in the n°52 sister 458.

In GTC the n°69 SMP Racing Ferrari of Kirill Ladygin overtook the sister car on pole position, with the n°62 AF Corse Ferrari of Stefano Gai making up ground to finish the opening few laps in 2nd in class. Gai closed the gap and a great battle ensued which lasted until lap 22 when the AF Corse Ferrari got past to take the class lead.

Meanwhile at the front Turvey continued to open up his lead as Mailleux overtook Beche while negotiating traffic for 3rd place but immediately came under pressure as the Swiss driver fought back to regain the position. However this allowed the n°34 Race Performance Oreca-Judd of Patric Niederhauser to catch up the battling pair and another backmarker incident meant Beche lost another position on lap 26.

In the GTE battle Griffin soon made his way to the front of the field, overtaking Jeanette for 2nd place and then swept past Camathias for the lead two laps later.

The first pitstops approached with the n°18 Murphy Prototype the first to pit with the n°34 Race Performance Oreca. However frantic gesturing from Hirschi meant there was a problem for the Murphy Oreca as the car failed to start. Eventually the car was pushing back to the paddock for a new starter motor and when Brendon Hartley rejoined the race he was over 17 laps behind the leaders and any hope of major points gone.

Next to pit was the leader, with Turvey getting the Zytek back out in front as the pitstops were completed. However a few laps later the Jota Sport team was informed that a 30 second Stop-Go penalty had been given as Turvey was too quick exiting the pitstop. The penalty was duly served and the Englishman rejoined in 4th place, promoting the n°1 Thiriet by TDS Racing Oreca into the lead of the race.

The second placed n°34 Race Performance Oreca of Michel Frey went off the track at Turn 8 and eventually rejoined after losing a couple of places. Oliver Turvey went in for his second pitstop of the race to hand over the car to Simon Dolan, who rejoined and then spun and rejoined after losing precious seconds. 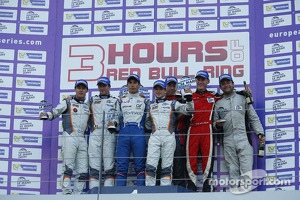 In LMPC Gary Hirsch was now at the wheel of the n°49 FLM Oreca, holding a comfortable 22 second lead over Nico Verdonck in the n°47 sister car. Hirsch was able to maintain this gap as they moved through the GTE and GTC battles ahead of them.

In LMGTE Griffin held a very comfortable 52s lead as he came in to hand over the car to Johnny Mowlem for the final 65 minutes of the race. Frank Montecalvo in the n°53 RAM Ferrari found his rear view mirror filled by the n°66 JMW Ferrari of Andrea Bertolini as the Italian challenged and soon passed the American for 2nd place in the GTE class.

The n°4 Boutsen Ginion Racing Oreca of Dominic Kraihamer suffered a collision with a GTE car and the damage eventually caused the car to retire with transmission problems after several trips to the pits.

The battle for the GTC lead between the n°62 AF Corse Ferrari and the n°69 SMP Racing Ferrari was decided on the final pitstop when Lorenzo Case got back out into the lead but smoke was seen pouring from the right rear Michelin tyre and the Italian was forced back into the pits to have the problem sorted out, allowing Fabio Babini in the SMP Ferrari to take the lead as the race approached the final few laps.

Meanwhile the n°36 Signatech Alpine of Nelson Panciatici was moving towards the front of the field after the qualifying penalty that saw the car start the race from the back of the LMP2 field. By the final hour of the race the Alpine-Nissan was running in second place 22 seconds behind the leading TDS Oreca, now with Pierre Thiriet at the wheel. However as Panciatici made up ground, Thiriet responded to keep the gap at a comfortable 20 seconds, which he did until the chequered flag was shown on lap 122.

At the chequered flag it was Pierre Thiriet who was able to celebrate the second win of the season and the 25 points gained extended his and his team’s lead in the LMP2 Driver and Team Series Trophies. Second place for the n°36 Signatech Alpine means the team is lying second on the Team title race by 17 points and Pierre Ragues and Nelson Panciatici (48 points) are in third place behind Pierre Thiriet (65 points) and Mathias Beche (50 points).

Victory for Gary Hirsch and Paul Loup Chatin extends their lead to 15 points over Anthony Pons and Soheil Ayari, who finished 3rd in class behind the n°46 Algarve Pro Racing Team FLM Oreca of CO Jones and Nicky Catsburg, who took second on the team’s ELMS debut.

Johnny Mowlem brought the n°52 RAM Racing Ferrari home with a comfortable 54 second gap to the n°66 JMW Motorsport Ferrari of Andrea Bertolini. The 25 points mean that Griffin and Mowlem extend their lead in the LMGTE Driver Series Trophy to 25 points over Gunnar Jeanette and Frank Montevaldo, who finished 3rd.

The SMP Racing team celebrated scoring their second win in the two races they have competed in this year as Fabio Babini, Viktor Shaitar and Kirill Ladygin stood on the top step of the podium. The n°79 Ecurie Ecosse BMW Z4 of Ollie Millroy, Andrew Smith and Alasdair McCaig, which had started at the back of the field, made up places during the race and once again finished on the podium behind the n°62 AF Corse Ferrari of Andrea Rizzoli, Stefano Gai and Lorenzo Case. The 15 points for 3rd keeps the Ecurie Ecosse team at the head of the Team Series Trophy points table by just one point ahead of AF Corse, with Andrew Smith and Ollie Millroy heading the Driver standings by a similar margin.

The next race of the 2013 European Le Mans Series will take place in Hungary at the Hungaroring near Budapest on Saturday 14 September.

LMP2: Pierre Thiriet n°1 Thiriet by TDS Racing, ORECA 03-Nissan
“The race was not easy. The car was good, but the traffic was difficult to deal with. I also had to find the right balance between performance and risk: I decided to take less chances and I was able to manage the gap to the Alpine. As always, the team did a superb job and Mathias (Beche) also had two great stints. We decided to forget about Le Mans and this victory feels good. It motivates us for the future.”

LMPC: Gary Hirsch n°49 Team Endurance Challenge, ORECA-FLM 09
“The win was much hard this time than at Imola, but we did it. I didn’t know the track at all so I had to learn quickly. Paul-Loup qualified well and had a good double stint to create a sizeable gap. I had to maintain that advantage and, despite difficult traffic conditions with GTs that were quick on the straights, we completed the mission. I’m very happy with the weekend : the performance of the car was there, and we’re continuing our progression, all while widening our points lead in the championship.” 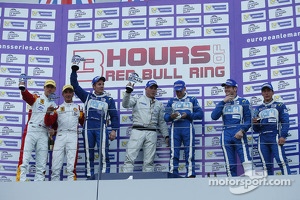 Matt Griffin n°52 Ram Racing Ferrari 458 Italia
“I had no particular issues but I didn’t make the best start and kind of got hung out to dry at Turn 2 and ended up half on the track and half on the grass. This track, although it’s great, is difficult to pass on as you have to be very sure you can make the move, so I just thought I’d bide my time, while sitting in 3rd. I got by Gunnar for 2nd with a bit of him from him, and then caught the JMW car and got past him. The car was incredible and I was able to pull a gap out straight away.

“A double stint round here is very physical and hot so we talked on the radio about whether I was okay to continue for the second hour, but I was happy in the car and we did a second stint on the same tyres to save some time in the pits. They started to drop off a little bit towards the end but by that time I’d manage to do some damage to the field and it was great that Johnny was able to get in and finish the job off.”