Three AF Corse Ferrari 458 Italia in the European Le Mans Series (ELMS) 2013. There will be two 458 Italia GT2 competing in the GTE category while the third Ferrari will race in the GTC category.

Following the entry list, in the 458 Italia GT2 No. 54 are Howard Blank, Yannick Mallegol and Jean Marc Bachelier, a close-knit group that did well in the Blancpain Endurance Series 2012. 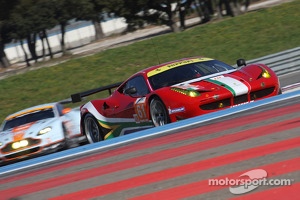 Federico Leo, Piergiuseppe Perazzini and Marco Cioci will drive the AF Corse Ferrari 458 Italia GT2 No.55. Leo is the reigning champion of the GT Open International series, (which he won with the AF Corse Ferrari 458 Italia GT2) and a young driver among the most promising on the Italian scene; Perazzini, who came second two years running in the ELMS, is a driver with great experience in the GT cars; Cioci, who partnered Perazzini to second place both years, is considered one of the fastest drivers in the GT.

The squad engaged in the GTC category are also very talented. At the wheel of the Ferrari 458 Italia GT3 No.62 are Stefano Gai, Andrea Rizzoli and Lorenzo Casè. All young with great potential proven with results gained in past seasons. All three have always shown the ability to win and aim for important successes.

The “games” will begin this weekend with the three hours race in Silverstone, scheduled Saturday 13th from 3 until 6 P.M. (GMT +0).