24 hours in: The Maxi Endurance 32 Hours at Algarve 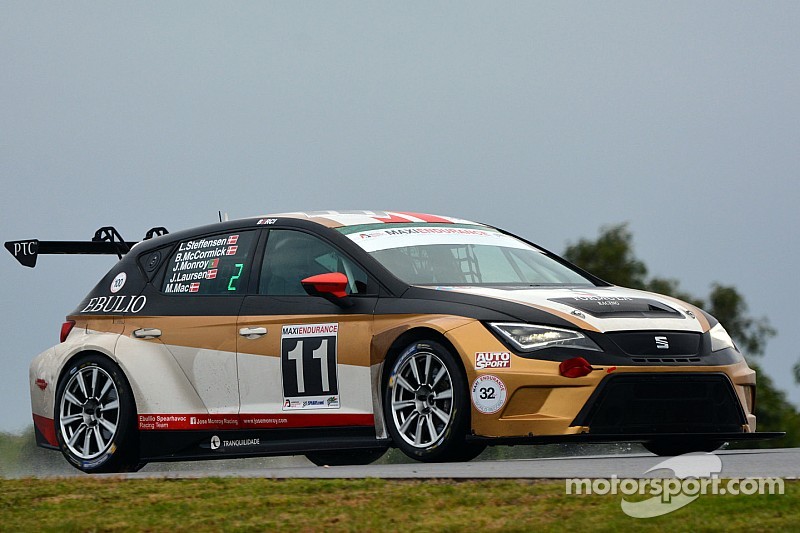 Just when a “normal” 24-hour race would be ending, we are ready for another eight hours of action! The Maxi Endurance 32 Hours has just passed that important milestone. Followers of endurance racing everywhere are now watching as this historic event passes into uncharted territory.

The Number 11 Seat Leon Racer of Formula Racing (in photo) has taken over the lead of the Maxi Endurance 32 Hours. The change occurred during the night when the long-time overall leading Maxi Prototype class Wolf-Honda run by Avelon Formula suffered major gearbox issues. It lost three hours in the pits. Once repaired, it was again circulating as the fastest car in the race, but now some 50 laps down. As there are still eight hours remaining there is ample time for it to catch up. This should add to the drama of this event.

The night time saw more of the intermittent rain that has challenged the competitors, along with windy and cool conditions. There are hints of sunlight as the sky has continued to brighten over the Algarve region.

Two of three BMWs in the race have had issues associated with the weather. The Number 12 Intersport Racing BMW M3 CSL is plagued with a misfire stemming from water in the plugs. More ominously, the team has noticed a bad vibration in top gear, and a gradually deteriorating third gear. They are preparing their other car, Number 15, for a possible gearbox swap.

At least they are happy to see daylight as a problem with the lights hampered their speed. Nevertheless, the Number 12 BMW has maintained a reasonable hold on second place and second in the Maxi Sport class as well.

Some 20 laps behind Intersport lies the Number 16 Cor Euser Racing BMW 120d, which has had possibly the most perfect race in the field. Running at a steady pace, the little diesel powered car is in third overall and first in Maxi Touring.

Their teammates, the Number 17 Cor Euser Racing BMW Compact has spent most of the night in the garage. They had wheel and driveshaft problems which caused havoc with surrounding components. One consequence was that the cables powering the ABS were sheared through. Not wanting to run in the rain without ABS, the team is waiting either for drier conditions or possibly sourcing ABS parts from a local shop—another case of the spirit of endurance racing carrying on!

The Maxi Cup class is being led by the No. 8 Bolido Racing Viper which had issues yesterday and then had an off-course excursion. There were two brief full-course cautions during the darkness, both for minor incidents including the lost wheel of the number 17 BMW and the spinning Viper. Both cars were recovered.

Superb podium for Walkinshaw on endurance debut in Abu Dhabi