25 Hours of Thunderhill brings out the stars 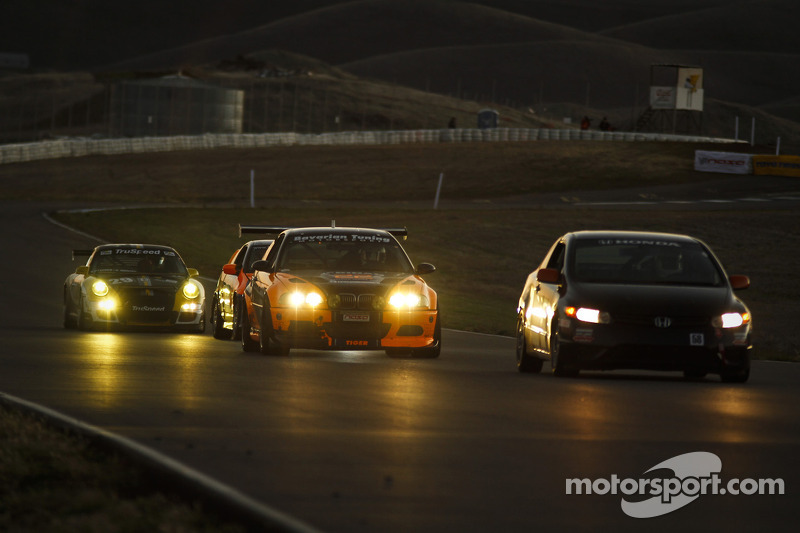 Some big names are expected to take part in this years 25 Hours of Thunderhill.

The 2013 United States Air Force (USAF) 25 Hours of Thunderhill race is looking to be one of the most exciting and competitive races in its ten year history with strong competition featuring racing personalities from around the world. A current entry of 63 cars are ready to take the green flag on Dec. 7-8 at Thunderhill Raceway in Willows, Calif.

Daijiro Yoshihara (Dai), the 2011 Formula Drift Champion, will be making his endurance racing debut in the No. 95 Spoon Sports Honda CR-Z. Instead of going for style points, Dai, the driver known for his sideways car control, will try to translate 12 years of drifting history to 25 hours of racing on the 15-turn, 2.86-mile Thunderhill Raceway.

"I've wanted to do this race for a long time and I finally got the chance with Team Spoon," Yoshihara said. "I'm so excited! This is my first time driving for Spoon Sports and I am teamed up with great drivers, so I want to learn as many things as possible. Drifting is completely different from road racing, but both drifting and road racing require car control skill to do well. I think I can use all my car control skill that I've learned from drifting and translate that into road racing. There will be so many different cars running together and some of them are a lot faster than the car I will be driving. It's not really a concern, but it's a new thing to me and it might take time for me to get used to being passed by those cars on the track over and over."

Achilles Motorsports is bringing their E0 Class No. 44 Achilles Motorsport BMW E46 M3 to run the 25 hour for the sixth time. Driving the BMW will be Chris Sarian, Jim Stevens, John Longwell, Marc Ghafouri and V.J. Mirzayan. The 2008 E0 Class winners also use the 25 as a marketing and testing ground.

"The 25 hours of Thunderhill is one of the most challenging races in the world," Frank Vasquez, Achilles Motorsports said. "Our goal for the 25 Hour race each year is simply to finish the race, which, in itself, is a very ambitious task. With this being our sixth year running the event, we feel we have a good grasp on what is required to get to the finish line. The biggest challenge we face is to keep our errors to a minimum and keep ourselves in the race. The smallest error can end up costing you the race. Our car does not undergo any significant changes specifically for this event. We do our best each year to show up to the race with as fresh of a car as possible. During the 25 hours you can easily get distracted and lose focus due to various reasons, one being fatigue. The 25 hour race also serves as a great advertising and testing ground for our BMW racing and performance parts that we manufacture and market. At the end of the event we will come back to the shop and swap out parts that we manufacture and examine how well they handled the abuse. We feel the long and grueling conditions make for an amazing test of our products quality, strength and reliability."

Troy Lynam is returning to Thunderhill with his No. 1 Lynam Racing/Cold Cock Whiskey/Chevrolet Silverado. The team recently rebuilt the Silverado. The truck was stripped down to the bare tube frame and every weld was checked and repaired. The truck was reassembled in August with a new 500hp Chevrolet V8, a few new aero tricks and a great new sponsor on board with Coldcock American Herbal Whiskey. Returning to drive this year are team owner Troy Lindstrom and Jeremy Croiset. Joining these two veteran racers will be endurance and stock car racer Randy Blaylock.

"It's a real challenge to put together a strong effort for 25 hours of racing," Lynam said. "In August we tested at Thunderhill and the new Coldcock Whiskey Silverado proved to be a much more potent machine. With the support of Hoosier tires and Wilwood Brakes, the truck was catapulted into unchartered lap-time territory for this 15 year old race vehicle. Normally this truck-bodied stock car would be considered a sprint race vehicle, but extensive modifications have made the truck a formidable competitor on the endurance circuit. We also have our great crew of 20 friends and family coming with us again this year. Our amazing crew will somehow manage the elements and still be there when needed at 3 a.m. Many of the crew is from Lynam Industries, Inc. volunteering their time to join the effort."

"We are just a couple weeks away from the green flag on this year's USAF 25 Hours of Thunderhill," Jerry Kunzman, NASA Executive Director, said. "To date we have 63 teams and over 244 drivers ready to go racing. We also have great support from our sponsors. Those competitors running on Toyo Tires will have access to the Toyo hospitality tent with full catered meal services. Royal Purple will award new drivers suits to the winner of the E3 class. Hawk Performance will award the E3 Class winner a $3,500 cash payday and full access to the Hawk Performance catalog including the recently released Race Calipers and Race Rotors. In addition, we will have racing legends Al Unser Jr. and Davy Jones in the field along with current sports car competitors Mark Wilkins and Randy Pobst. The race will also have an international flavor with the Team Spoon entry from Japan, a group from New Zealand, a team of Dutch drivers and the Germans with their Audi TT RS. It is going to be a great weekend of racing."

The live race web broadcast can be heard on the Internet at www.enduranceradio.net.

24h race Nurburgring will be heralded by a qualifying race