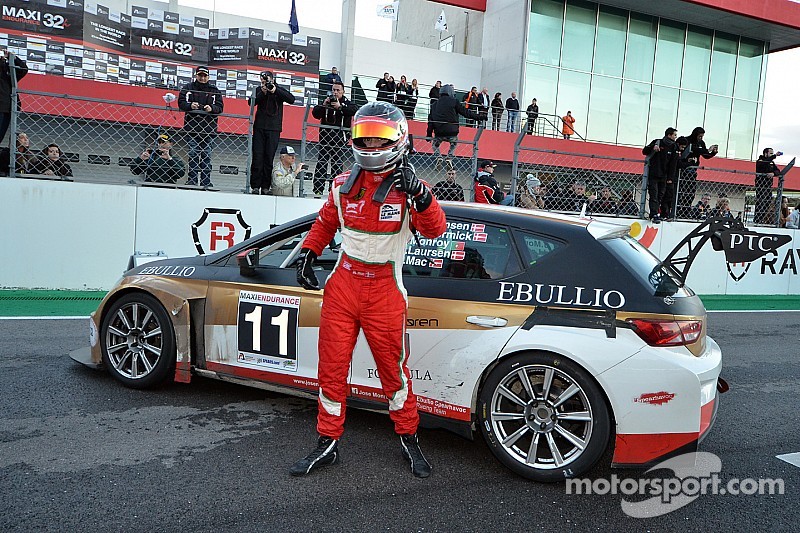 The Cor Euser Racing BMW 120d won the Maxi Touring category and finished third overall, a spectacular result for the smallest car in the field. American Jim Briody was competing in his 75th race of 24 hours or more and his steady work along with fellow American Hal Prewitt, New Zealand’s Maurice O’Reilly, Germany’s Jörg Chmiela and Dutch team owner Cor Euser brought the experienced international crew to the line just ahead of the charging Dodge Viper of Bolido Racing.

The very fast American built car had led overall at various stages but suffered engine problems as well as an off-course excursion. While they were unable to capture the last overall podium spot the crew led by Spanish driving ace Jose Manuel de los Milagros and race organizer Jesus Diez did win the Maxi Cup class. The last few hours featured a stirring chase as the Viper worked to make up lost ground.

One of the most inspired efforts came from the Veloso Motorsport Seat Leon Racer. They suffered an ECU failure as the car headed to the starting grid and spent the first 3-1/2 hours of the race in the pits. Henceforth the Mikel Azcona and Jordi Oriola led car had a near flawless run, rising to fifth overall and third in Maxi Sport at the finish.

The Team Icer Brakes Wolf-Honda GB 05 proved to be one of the fastest cars on the circuit and led for most of the night. However, a break in the suspension and a subsequent accident for driver Jose Luis Abadin put them into the garage. They were still awarded with victory in Maxi Prototype.

The late afternoon finish came under clearing but cool and windy conditions. For much of the night there was a persistent light drizzle that created considerable challenge to each team’s strategy. However, the race was run clean and nearly incident free.

It was a tremendous pioneering effort to venture into the realm of extreme endurance racing for the highly professional teams and organizers. There was a general feeling of accomplishment for all in what was a very strong collaborative effort from the management of both the Portuguese and Spanish motor sport federations and several other major racing organizations. Now that the groundwork has been laid, the people at Maxi Endurance look forward to even greater success at future rounds.