Audi underlined its endurance race pedigree with a commanding one-two performance in a gruelling Total 24 Hours of Spa, the fourth round of the Blancpain Endurance Series. 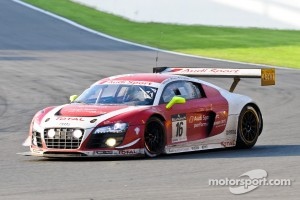 It was the third major endurance victory for Audi in 2012 following success at the Le Mans 24 Hours and the Nurburgring 24 Hours.

“It was a hard race for us, especially because our top speed is not the best and we always had to take a lot of risks to overtake other cars. The Audi R8 was a tank this time and I’m very happy with the result and very relieved that the car lasted and so did we,” Stippler said.

Rast, a Spa debutant, added: “I didn’t expect to win my first 24 Hours of Spa. We had a lot of mixed conditions, Safety Cars, massive rain and aquaplaning to deal with but we got our strategy right and we had fast pit stops and made few mistakes.”

Second-placed Ortelli said: “First of all congratulations to the winners, you did such an amazing job, well done.

“I am really proud to be part of this Audi family. We had one legend here in Tom Kristensen but it also nice to share the podium with the likes of Frank (Stippler) who is also a legend and he deserves all the success he gets. It was a great fight and I can’t wait to come back.”

A crowd of over 53,000 witnessed a true classic – a battle against the Ardennes elements, physical and mental fatigue and mechanical durability. The race began and finished in sunshine but in between there was torrential rain and a spate of Safety Cars.

In the end it was Audi who came out on top after a race-long internal squabble and a separate duel with two front-running BMWs. Apart from a puncture and a small issue with a wheel-bearing after contact with a slower car, the Audi ran trouble-free.

“It was my first Spa 24 Hour race, it was extremely tough but I really enjoyed it,” Lauda said. “We knew the car was quick, Frank (Kechele) put the car on pole. We had the pace to win the race, but unfortunately we lost too much time at the beginning. We lost two laps when we were on slick tyres when it began to rain which cost us.”

Victory in the PRO-AM class went to the No.52 AF Corse Ferrari of Niek Hommerson (NLD), Louis Machiels (BEL), Andrea Bertolini (ITA) and Alessandro Pier Guidi (ITA). The car lost time when held in the pit lane under the Safety Car and overcame a gearbox downshift gremlin to secure its second successive class win in the Blancpain Endurance Series.

Bertolini said: “It is very difficult to manage a race like the Spa 24 hour race and I think the Race Director did an excellent job because in the night it was not easy, 67 cars, the conditions were extremely difficult and he made the right calls with the Safety Cars. For us drivers he made it easier and more safe and for this I want to say thank you to the Race Director and all his staff.”

The Gentlemen Trophy went to the First Motorsport Belgian Porsche squad of Steve van Bellingen, Bert Redant, Johan Van Loo and Armand Flumal who took a superb 17th overall from 63rd on the grid. They became the fourth different class winners of the season.

The Cup Class, for older generation cars, went to the all-Belgian SpeedLover Porsche 997 GT3 Cup No.95 of Kevin Balthazard, Christophe Bigourie, Rik Renmans and Raf Vleugels which saw off its class opposition.

Strong performance for Reiter Engineering at 24 hours of Spa