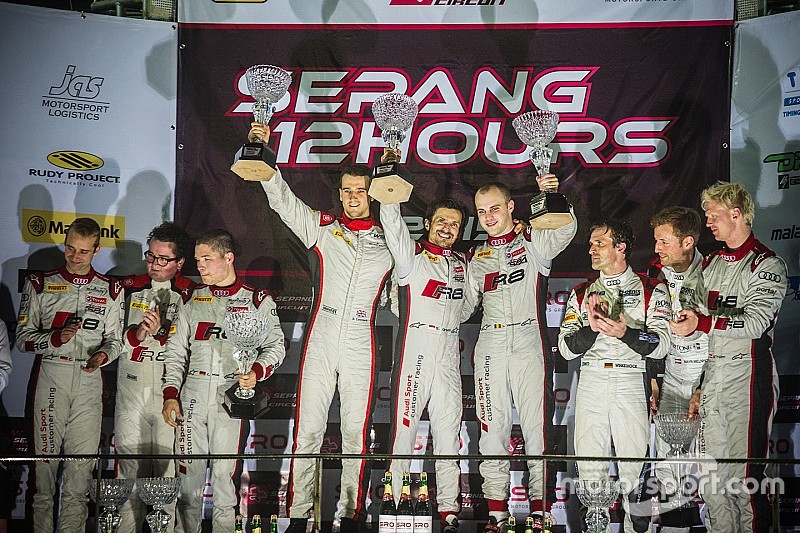 The #17 WRT car of Laurens Vanthoor, Stephane Ortelli and Stuart Leonard led an Audi R8 LMS 1-2-3 in the 2015 edition of the Sepang 12 Hours, which had been red-flagged for several hours due to torrential rain.

Vanthoor, returning after an injury sustained in a heavy shunt in the Blancpain Sprint Series at Misano, took the chequered flag in night-time conditions, recording Audi's first victory in the event and ending Ferrari's two-year winning streak.

Much of the race, which saw two red flag periods due to heavy rain make up almost three hours of the running time, was led by the #16 Phoenix Audi of Markus Winkelhock, Nicki Thim and Niki Mayr-Melnhof.

But while Winkelhock would build up a sizeable lead after the first red flag, it would be nullified by another rainstorm - and when the race got back underway with less than two hours ago, the lead was in Vanthoor's hands.

The #150 Audi WRT car of Enzo Ide, Christopher Haase and Christopher Mies managed to briefly take first place after its final stop by electing not to change tyres, but teammate Vanthoor reeled in Mies and completed the pass for the win with 40 minutes remaining.

Winkelhock took third in the Phoenix car as the final lead-lap finisher, while the FF Racing Team crew of Alvaro Parente, Andrea Caldarelli, Andrew Watson and Hiroshi Hamaguchi was best of the non-Audis in the McLaren 650 S.

The #1 Clearwater Racing Ferrari 458 Italia looked in with a good shot at taking a third consecutive triumph with the event, crewed by Ferrari factory men Gianmaria Bruni, James Calado and Matt Griffin, as well as three-time winner Mok Weng Sun.

Bruni started from pole, but was tapped into a spin when lapping the #80 Lotus Exige of Team Proton and subsequently sustained an unrelated puncture.

The damaged car, handed over to Griffin and then Calado, went on to suffer an ECU failure, before a second puncture led to the team calling it a day.