To win a race like this – the Spa 24 Hours of Spa – is always something special.

After the race, Scheider, now the two time winner of the Total Spa 24 hours race was obviously very happy to win again at Spa. His first win came in 2005 with the Maserati MC12/Vitaphone Racing team when the race belonged to the FIA GT Championship series.

“I have to thank all the guys who supported us this weekend, especially the WRT team. We came here with some expectations but we didn’t know what we could achieve. These guys did an awesome job,” said Scheider. “Starting from the kitchen, to the tyre guys to the mechanics and the engineers. We made no mistakes and the Audi R8 LMS lasted till the end which is the key to why we are sitting here today.

“We just changed once or twice the brakes but everything else ran smoothly. Mattias (Ekstrom) had one of the worst stints you could choose. He was out there this morning on slicks in the hard rain and he did a great job. We had some pressure and we had to survive and we did that. To win a race like this – the Spa 24 Hours of Spa – is always something special,” added the German.

The key for the win by Audi Sport Team WRT seemed to be precise strategy and staying out of trouble. The win wasn´t easy through as just like at the another main race of the year for GT3/GT4 teams, ADAC Zürich 24h Rennen, also known as the Nürburgring 24 hours. After qualifying and in the early hours, the teams using Audis seemed to lack pure speed compared to their rivals teams of Porsches, Ferraris, BMWS, Aston Martins and Lamborghinis, to name a few. 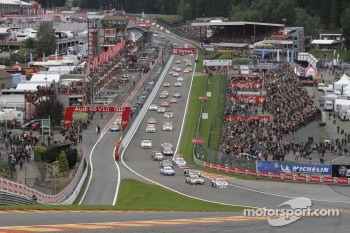 While pure speed is good to have, being reliable in an endurance race is more important which Audi proved. Dr. Wolfgang Ullrich (Head of Audi Motorsport): "We knew that it would be a very difficult race. I estimated that there are a good 15 cars capable of winning. This also proved to be the case in the first few hours of the race. However, our excellent performance from the very beginning allowed us to overcome the competition. For a large part of the race there was always an Audi in the lead. At the end it was the R8 LMS with Mattias Ekström, Greg Franchi and Timo Scheider which took the honors. The other WRT car only narrowly missed the podium. The Phoenix cars were very fast but unfortunately had some problems. Because of this they kept dropping back."

The GT4 class was won by RJN Motorsport Nissan 370Z of Alex Buncombe, Chris Ward and Jordan Tresson. RJN Motorsport won the GT4s by 11 laps after the Lotus Evora of Greg Mansell, Eduardo Piscopo, Leo Mansell and Gianni Giudici was forced to retire when their engine blew in quite a spectacular way.

As all in all, this year’s edition of Total Spa 24 hours and the switch to GT3/GT4 cars can be kept as quite successful despite some fans being slightly unhappy about not seeing the GT1 and GT2 cars from the past days in Europe. They now see less and less action around GT1 and GT2 cars.