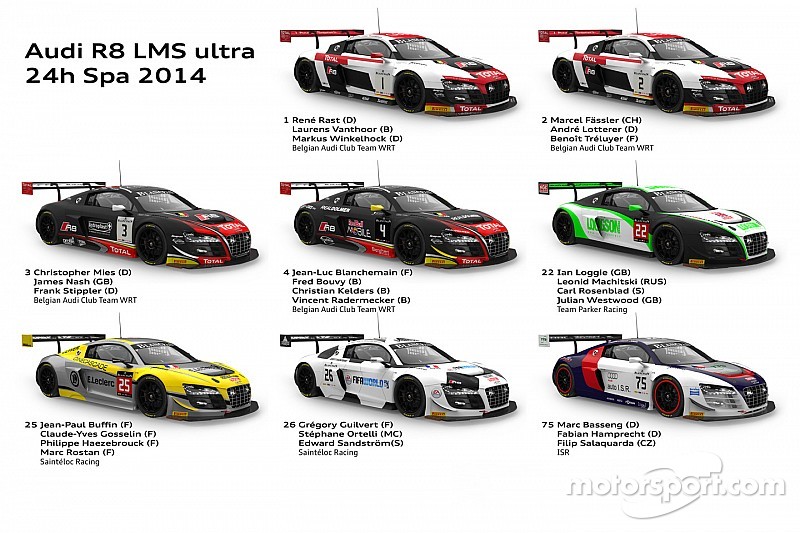 Four teams with a total of eight Audi R8 LMS ultra cars on the grid; Chance for third 24-hour race victory within the space of six weeks.

Audi has clinched two 24-hour race victories so far this year: the iconic sports car race at Le Mans (June 14/15) with the R18 e-tron quattro of Audi Sport Team Joest and, a week later, the endurance race at the Nürburgring with the R8 LMS ultra of Phoenix Racing. At Spa, on July 26/27, the brand will have the opportunity to win a third 24-hour race within the space of just six weeks. In the worlds biggest GT3 race featuring a field of 60 entrants, four teams will be relying on the Audi R8 LMS ultra.

The sports cars of eleven marques will be pitted against each other at Spa. Audi will be meeting with Aston Martin, Bentley, BMW, Ferrari, Jaguar, Lamborghini, Nissan, McLaren, Mercedes and Porsche. All of the race cars are entered in the same technical category  the GT3 class. Consequently, a victory on the challenging Grand Prix circuit in Belgium numbers among the most important single wins a GT race team can achieve anywhere in the world. In 2011, the Audi R8 LMS celebrated its first overall win in the Ardennes and topped it by a one-two in 2012. Last year, André Lotterer/Christopher Mies/Frank Stippler drove an impeccable race but, with a six-lap gap, finished only in third place. The balance of performance rating of their R8 according to the regulations, which is typical in GT3 racing, did not permit them to achieve more competitive lap times.

This year, Audi is hoping for a more level playing field in order to have a chance of clinching its third victory at Spa within four years. The Belgian Audi Club Team WRT will be competing at Spa with optimum prerequisites. The squad of Vincent Vosse, that clinched Audis first success at Spa in 2011, is fielding four R8 LMS ultra cars in its home round. German duo Markus Winkelhock and René Rast, the Nürburgring winners, will be sharing car #1 with the Belgian Laurens Vanthoor, the current FIA GT Champion. Car #2 will be driven by Marcel Fässler/André Lotterer/Benoît Tréluyer, who in June, decided the Le Mans 24 Hours in their favor for the third time. Taking turns at the wheel of the #3 Audi will be Frank Stippler, the 2012 Spa winner, and his German compatriot Christopher Mies, the 2012 winner of the Blancpain Endurance Series, plus the Briton James Nash. In the Pro-Am category for driver combinations of pros and amateurs, the Belgian Audi Club Team WRT will be relying on Fred Bouvy, the overall winner in 1999 and 2000, his two Belgian countrymen Vincent Radermecker and Christian Kelders, plus the Frenchman Jean-Luc Blanchemain.

Saintéloc Racing is fielding two other Audi cars. The team from France relies on Stéphane Ortelli (MC), the 2003 Spa winner, Edward Sandström (S), the runner-up in 2011, as well as Grégory Guilvert (F) in car #26. Before the 24-hour race, this trio is placed in third position in the Blancpain Endurance Series and aims to secure further valuable points in the battle for the title at Spa. The #25 sister car will be shared in the Gentlemen Trophy for amateur drivers by the Frenchmen Jean-Paul Buffin, Claude-Yves Gosselin, Philippe Haezebrouck and Marc Rostan. Team Parker Racing will compete in the same category with the Britons Ian Loggie and Julian Westwood, the Swede Carl Rosenblad and the Russian Leonid Machitski. A new Audi customer complements the line-up. ISR from the Czech Republic in its R8 LMS ultra is relying on Filip Salaquarda (CZ) and the two Germans Fabian Hamprecht and Marc Basseng, the 2012 GT1 World Champion.

Following pre-qualifying, qualifying and a mandatory night qualifying session on Thursday, the top 20 spots on the grid will be awarded in the super pole shootout on Friday. The race will start on Saturday at 16.30 (CEST).

Markus Winkelhock, Audi R8 LMS ultra #1 (Belgian Audi Club Team WRT)
The track at Spa suits me really well. Last year, I drove one of the most strenuous races in my career there  also due to the heat that is typical at the end of July. While we were a team of four drivers on clinching victory at the Nürburgring in June, we have to run as a team of three in the Pro Cup at Spa. René Rast and Laurens Vanthoor are two first-rate team-mates and the Belgian Audi Club Team WRT has demonstrated its qualities on many occasions. Hoping that Audi wont be disadvantaged by the balance of performance we should have a chance of mounting the podium after 24 hours  hopefully the top step.

Marcel Fässler, Audi R8 LMS ultra #2 (Belgian Audi Club Team WRT)
Of course Im intimately familiar with the Spa 24 Hours but Im contesting it for the first time with André Lotterer and Benoît Tréluyer, my two Le Mans and WEC team-mates. Im looking forward to the challenge of competing in this strong field. Our ambition is clear: were going to battle for victory. From my perspective, there are about 20 cars in contention for first place at Spa, so itll probably be a great and thrilling race. Its the home round for our WRT team, as well as for my team-mate André Lotterer, who grew up in Belgium.

Frank Stippler, Audi R8 LMS ultra #3 (Belgian Audi Club Team WRT)
Alongside the Nürburgring, Spa is the most attractive track for a 24-hour race. The history of this event is impressive. For the past two years, I was on the podium  as the winner in 2012 and in third place last year. Obviously, thats nice but it doesnt help us a lot because each race is a law unto itself, year after year  from the rating of the race cars through to the fortune you need. At the Nürburgring, its easy to overtake the competitors from the smaller categories but in a field of 60 GT3 cars, there will a some tough position battles at Spa. The weather in the Ardennes is unpredictable. Sometimes it even varies over the course of the seven-kilometer track. So there are a lot of factors that make the whole event unpredictable.

Christian Kelders, Audi R8 LMS ultra #4 (Belgian Audi Club Team WRT)
The Spa 24 Hours is arguably the worlds most fascinating GT race. For us as gentlemen drivers, its a nice feeling to be supported by a professional outfit such as the Belgian Audi Club Team WRT. The thing I particularly like about the Audi R8 LMS is that its so pleasant to drive. Plus, the ergonomics of the cockpit are perfect. This helps us drive without getting tired. Im hoping for a race without incidents because in that case a positive result would be possible.

Ian Loggie, Audi R8 LMS ultra #22 (Team Parker Racing)
The Audi R8 LMS ultra is a car that is well suited for us gentlemen drivers. Handling is very consistent and balance hardly changes even when the fuel load decreases. Ive raced on the track at Spa twice before, plus I practice at home on the simulator. For us, a 24-hour race is not about achieving the ultimate in terms of lap times but about having good control of the car and track and running without making mistakes from start to finish. Thats our goal.

Philippe Haezebrouck, Audi R8 LMS ultra #25 (Saintéloc Racing)
The Spa 24 Hours is a fantastic race. Im looking forward to competing on this fascinating circuit with the Audi R8 LMS ultra. Saintéloc Racing is very familiar with the R8. Twelve rivals are competing in the Gentlemen Trophy. Im hoping for us to be able to display our experience as a team in order to achieve a nice result in the end.

Stéphane Ortelli, Audi R8 LMS ultra #26 (Saintéloc Racing)
Im competing in an Audi at Spa for the fifth time. The R8 LMS ultra perfectly fits the challenging combinations of turns on this track. Together with Edward Sandström and Grégory Guilvert weve managed to drive a few good races in the Blancpain Endurance Series this year. Now Im hoping for us to be able to continue this string. Team Saintéloc has always done a very good job of preparing the car and is highly motivated. However, the squad doesnt have a lot of experience in 24-hour races yet. Thats why I dont see us as being in contention. Our aim is to score as many points as possible because additional points are awarded after six and twelve hours.

Filip Salaquarda, Audi R8 LMS ultra #75 (ISR)
We just recently acquired the Audi R8 LMS ultra. It perfectly fits our ISR team. ISR Auto is a Volkswagen and Audi dealer near Prague. Im looking forward to running with Marc Basseng and Fabian Hamprecht who already know the R8. I did my initial kilometers in the car during the official test day at the beginning of July. I know the 24-hour race at Spa  I was on the grid there two years ago. This is a huge challenge for us because were fielding car with our own team for the first time in a 24-hour race. Our aim is to stay clear of any trouble and to finish the race as quickly as possible with no mistakes.

Strakka Racing: The evolution of a Le Mans winning team