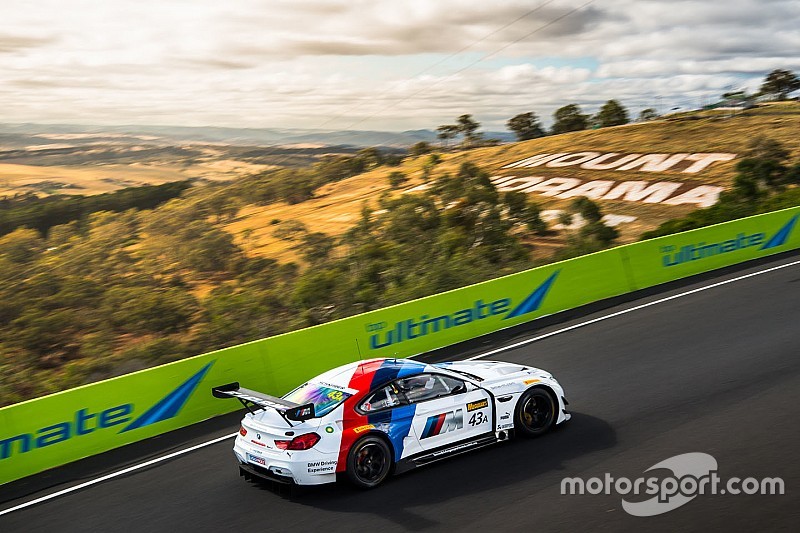 The BMW Team Schnitzer M6 was the dominant car during the first three hours of the Bathurst 12 Hour, thanks to an impressive opening stint by Chaz Mostert.

The race got off to stuttering start, the Safety Car called midway through the opening lap thanks to a car stranded at the last corner. It turned out the #96 MARC entry didn't even get to take the start, after being caught up in the congestion at the back of the field on the formation lap and ending up in the wall.

Seventeen minutes in the race finally went green, which signalled the start of the Chaz Mostert Show. The polesitter bolted into a remarkable lead, his times dipping into the 1m01s as he made good use of the short window of no traffic to pull a significant advantage over the chasing Audi of Christoper Haase.

That lead grew to the best part of 50s thanks to Mostert's relentless pace, the Aussie cycling back to third and then straight back to the lead as the first round of stops started to shake out.

His progress, however, was halted in the second hour thanks to a pair of lengthy Safety Cars. The first came when David Crampton fired his KTM into the wall 89 minutes in, leading to a 15-minute clean-up.

Mostert comfortably survived the restart thanks to having plenty of lapped cars between himself and Markus Winkelhock, who had taken over from Haase, but was immediately back behind the Safety Car thanks to an Audi tangle on the first lap.

This time the issue was Andrew Bagnall in the #82 International R8, who fired into the wall and baulked the field behind him. That in turn led to #67 MARC II driver Morgan Haber hitting the back of Marc Cini in the #9 Hallmarc Audi, adding the carnage and sparking a third caution of the day.

It was a lengthy caution too, with medical crews attending to Bagnall. He's since been airlifted to hospital in Sydney in a stable condition.

The race didn't restart until the 2h25m mark, and the caution took its toll on Mostert's lead, with just a single lapped car between the Schnizter M6 and the #74 Jamec Pem Audi on the restart.

Not that Mostert was too fussed, stretching the advantage back to over 20s as the race reached the end of its first quarter.

Shortly before the end of the third hour a fourth Safety Car was called after the SRM BMW M4 hit the wall, the lead group responding by making a round of second stops and driver changes.

That means Marco Wittmann is now in the Schnizter car and sitting second on the road (behind Tim Slade in the #11 Objective McLaren).

The #74 Audi that ran second across the first quarter of the race also pitted under the stoppage, Winkelhock handing over to Chris Mies, who is sixth waiting for the restart.

The #22 Jamec Pem ran third for much of the stint, after inheriting the position when #777 Buik Lamborghini driver Luke Youlden was hit by a backmarker.

Before the late stops, however, Frederic Vervisch was about to come under pressure from #991 Porsche driver Laurens Vanthoor. The Belgian had been on a charge since the restart, passing brother Dries in the #37 WRT Audi before swiftly overhauling Guy Smith in the #17 Bentley.

The Craft-Bamboo entry was shuffled back to 11th during the second stops, with Kevin Estre now at the wheel.

Class B is currently being led by the #23 Carrera Cup Asia crew, after early leader Ben Barker (#4 Grove Porsche) was handed a drive-through for a restart infringement.

Max Braams leads Class C in the #46 Prosport Porsche, with Rod Salmon well ahead in the Invitational class in the #91 MARC II.