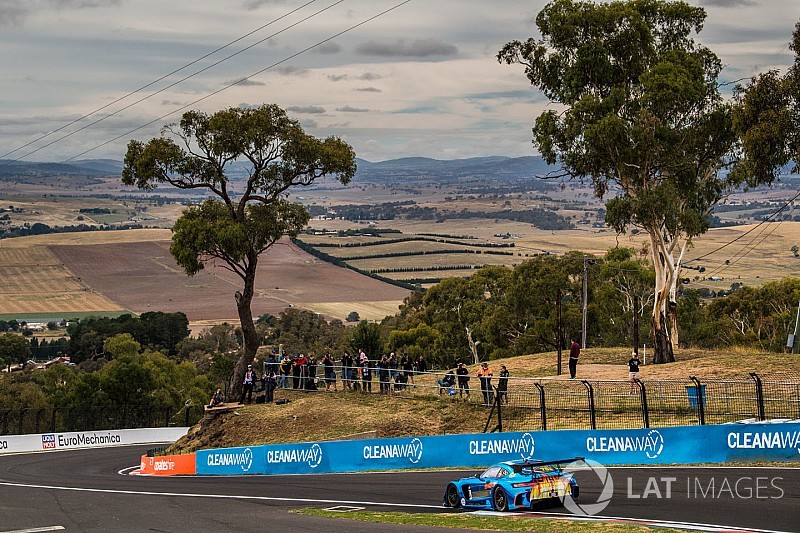 Raffaele Marciello leads the Bathurst 12 Hour with a quarter of the race left to run, as the majority of the Top 10 squares up to battle it out for the final three hours.

Much of the seventh hour was soaked up by Safety Cars, the first called when Paul Morris' MARC II car caught fire, before the #88 Ginetta was fed into the wall by the #21 Porsche at the restart.

It wasn't until the seven-hour mark that the race got back underway, Cam Waters leading in the #55 Strakka Mercedes thanks to a re-shuffle by stops behind the Safety Car.

The main contenders from the first half of the race were right in the game as well, with Markus Winkelhock running second in the #74 Audi, followed by Tristan Vautier (#75 Mercedes), Philipp Eng (#100 BMW), Augusto Farfus (#43 BMW), Kelvin van der Linde (#22 Audi), and Laurens Vanthoor (#991 Porsche).

When the Safety Car made its 12th appearance of the day to retrieve a stranded Daytona, the two leading Audis wound up back on top by opting not to pit, Winkelhock leading van der Linde.

The two BMWs did make a quick stop and driver change, Marco Wittmann and Steve Richards taking their respective wheels, while the #991 Craft-Bamboo Porsche also elected to stop.

The race restarted with four-and-a-half hours to go, the two Audis bolting into the lead ahead of Matt Campbell in the Competition Porsche and Jaxon Evans in the Objective McLaren, the pair of Pro-Am entries finding their way into contention as the Safety Car stops shook out.

The Audi formation flying didn't last long, however. With the clock ticking down on the eighth hour, van der Linde made a crucial mistake while dealing with lapped traffic and slapped the wall, ending the #22's charge.

That left Winkelhock 20-odd seconds clear at the eight-hour mark, before the #74 dived in the pits and handed the lead over to Campbell in the Pro-Am Porsche.

Fifteen minutes later Campbell made a stop of his own, handing his Porsche over to Pat Long and the lead over to Mercedes driver Raffaele Marciello as the strategy split between the two groups on the lead lap started to swing the other way.

With three-and-a-half hours to go that swing continued, Marciello and Cam Waters pitting within a lap of each other to make it a BMW one-two, Richards leading Wittmann.

The double DTM champ stopped the next time around, handing over to first-stint hero Chaz Mostert. Richards gave up the lead a lap later to hand over to Timo Glock, before Dries Vanthoor followed suit after a single lap at the front of the field.

That put Marciello back at the front of the field as the race hit the nine-hour mark, followed by Haase in the remaining all-Pro Jamec Pem Audi.

Steven Kane currently sits third in the #17 Bentley, ahead of the #991 Porsche and the #55 Mercedes.

Mostert is best of the BMWs in sixth, 52s off the lead but having more recently stopped, while the likes of Dries Vanthoor, Dirk Werner, Long, and Glock make up a Top 10 still all in genuine contention.

The Grove Motorsport Porsche is back on top in Class B, leading by a lap over Wall Racing entry. The Boat Works BMW M4 has a five-lap lead in Class C, while the #91 MARC II leads the Invitational class.

Tune in to our Bathurst 12 Hour livestream

Ryan Newman criticizes NASCAR for Truex penalty: "It's not fair"