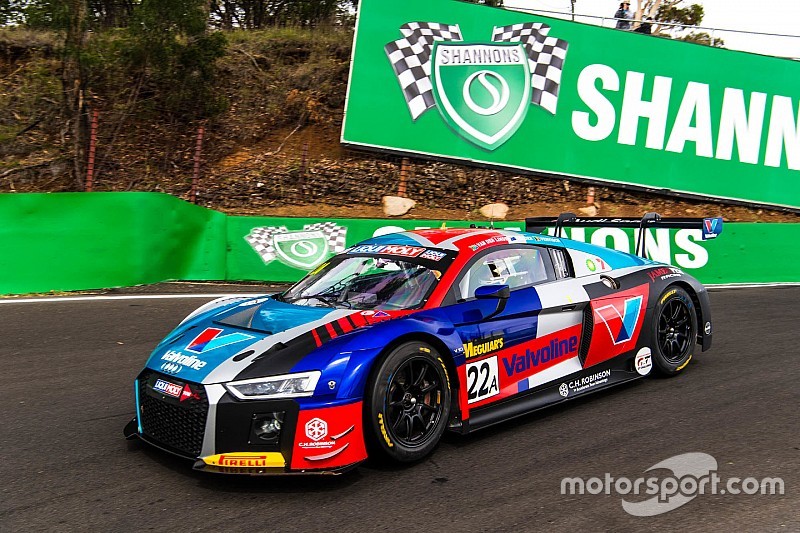 Audi Sport rounded out the day's running at Mount Panorama on top of the times, with the #74 entry setting a new Friday record to finally topple the Schnitzer BMW.

Times dropped into the low 2m04s straight away thanks to an early lap from Philipp Eng in the SRM BMW, before Chaz Mostert put the Schnitzer car on top with a 2m03.734s just nine minutes in.

Five minutes later Chris Mies broke up the BMW party by going fastest in the #74 Jamec Pem Audi with a 2m03.648s, that time holding on for more than 10 minutes before Fredrick Vervisch took over with a 2m03.136s in the #22 sister car.

The Audi 1-2 was quickly broken by an improvement from Marco Wittmann, who slotted the Schnizter M6 into second just minute later.

That proved to be the final play of the session, which abruptly ended with 14 minutes to go thanks to the first red flag of the day.

The culprits were Mercedes GT3 driver Max Twigg and BMW M4 GT4 driver Ken Baigent, who had a high-speed coming together at The Chase to effectively cut the session short.

That left the two Jamec Pem Audis split by the Schnitzer BMW at the top, while the #37 WRT Audi grabbed fourth with a 2m03.776s set by Robin Frijns.

The #100 SRM BMW finished up fifth and last of the cars under the 2m04s bracket, while the #32 Lago Lamborghini was best of the Pro-Am cars thanks to David Russell's late lap.

In Class B the #23 Carrera Cup Asia Porsche completed a clean sweep of Friday practice, while it was a Porsche GT4 car on top in Class B thanks to Jorg Viebahn, and the #67 MARC II leading the Invitational class.