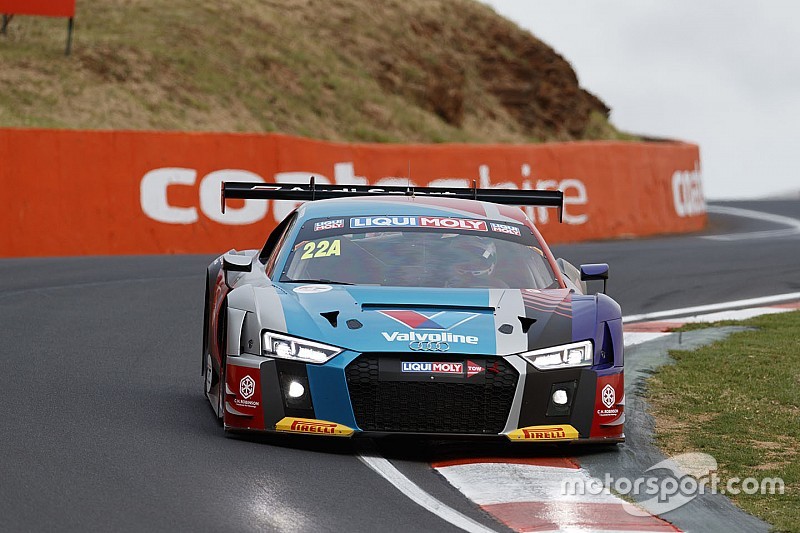 The frontrunners didn't wait until the GT3-only segment at the end of qualifying to start pumping out the Hollywood times, the likes of Chaz Mostert, Robin Frijns, and Frederic Vervisch firing straight into the 2m03s.

But it was on the quarter hour mark that things really started to heat up, SRM BMW driver Philipp Eng diving under 2m03s for the first time all weekend with an impressive 2m02.664s.

That proved to be the only sub-2m03s lap in the all-in portion of qualifying, Scott McLaughlin in the Pro-Am #47 YNA McLaren the next best with a 2m03.106s in the closing seconds before the mid-session break.

As the session resumed for the GT3 cars, and with Shootout spots now on the line, times quickly dropped into the 2m02s.

The first was #43 Schnitzer BMW driver Mostert, who chimed in with a 2m02.780s on his first flying lap.

Then, as the first 10 minutes of the 30-minute second segment came to an end, Lee Holdsworth sent his #9 Hallmarc Audi into the wall hard, bringing out the red flag.

After a lengthy clean-up, it all boiled down to a 10-minute sprint for the Top 10 Shootout spots, van der Linde leading the way thanks to that pre-stoppage lap.

Q1 fast man Eng, still way outside the Top 10 as the session restarted, was the first to have a go at van der Linde's time, falling a little under two tenths short as he slotted into second.

Schnitzer driver Chaz Mostert then had a go of his own, going within 0.02s of provisional pole as he knocked Eng down to third.

But that was it in terms of genuine challenges for top spot, van der Linde earning the right to run last this evening as the Top 10 do battle for pole.

Behind the leading Audi and the pair of BMWs, McLaughlin led the way for the Pro-Am cars, ahead of another Pro-Am entry, the #12 Competition Porsche driven by Matt Campbell.

Shane van Gisbergen was next in the #58 YNA McLaren, ahead of Audi stars Christopher Haase (#74) and Frijns (#37).

Reigning Bathurst 1000 winner Luke Youlden bagged a Shootout spot for the #777 Buik Lamborghini squad with the ninth-best time, while the #17 Bentley of Steve Kane snuck into the Top 10 by 0.04s.

The unlucky man on the bubble was Cam Waters in the #55 Strakka Mercedes, which was the best-placed AMG GT3.

Surprisingly, Campbell was the only Porsche driver to make it into the Top 10, with the factory-backed cars Earl Bamber and Frederic Makowiecki ending up 18th and 26th respectively.

Defending 12 Hour winner Jamie Whincup was another big name to miss out on the Shootout, the #75 SunEnergy1 Mercedes just 16th fastest.

In Class B, the dominance of the #23 Carrera Cup Asia crew came to an end as #4 Grove Motorsport squad – led by Ben Barker – grabbed pole position by a whopping 1.2s.

The GT4 class was a battle of the BMW M4s, Aaron Seton in the #30 Boat Works entry edging out the #44 SRM car driven by Cameron Hill.

In the Invitational class, Will Brown kept his impressive form going in the #91 MARC II to comfortably grab pole.

The top end of the grid will be finalised by the Top 10 Shootout, scheduled for 4:15pm local time.

Don't forget to check back for Motorsport.com's livestream.