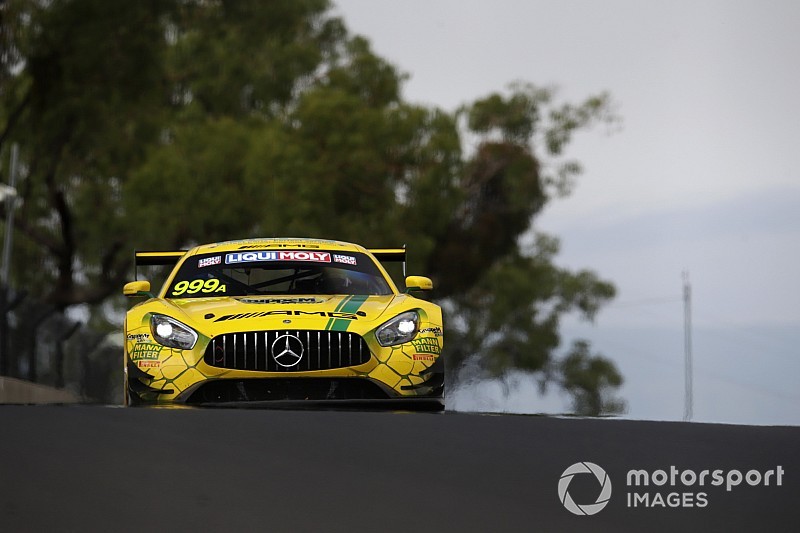 Raffaelle Marciello ended Friday's running as the pacesetter at the Bathurst 12 Hour, putting the GruppeM Mercedes on top for a second time.

Maro Engel set the early pace in the #77 Craft-Bamboo Mercedes with a 2m04.938s, which lasted until the quarter hour mark when Christopher Haase took over with a 2m04.539s in the #2 Valvoline Audi.

That kickstarted a flurry at the top, Engel responding immediately with a 2m04.225s, before Andy Soucek went even quicker with a 2m04.221s in the #108 M-Sport Bentley.

On the 20-minute mark Augusto Farfus became the first man under the 2m04s bracket for the weekend, the Brazilian setting a 2m03.801s in the #42 Schnitzer BMW.

Four minutes later Rafaele Marciello closed in on Farfus with a 2m03.968s to go second fastest, before charging clear of the field with a 2m03.588s on his next run.

That time didn't come under any real threat as the session ticked into its final quarter, much of which was then soaked up by a red flag caused by David Crampton beaching his KTM at the last corner.

However Kelvin van der Linde did get out for one more crack at Marciello's time at the flag, falling 0.04s short in the #22 Valvoline Audi.

The South African's late improvement knocked the Schnitzer BMW back to third, while Nick Foster's time in the #27 HubAuto Ferrari was good enough for fourth.

The Engel/Stolz/Paffett Mercedes wound up fifth, ahead of the #108 Bentley, the #62 R-Sport Aston Martin and the #2 Valvoline Audi, which never improved on Haase's early time.

David Reynolds was ninth quickest and best of the Pro-Am cars in the #777 Erebus Mercedes, with the #107 M-Sport Bentley rounding out the Top 10.

The #23 Team Carrera Cup Asia Porsche led the way in Class B, the #71 M Motorsport KTM in Class C, and the #20 MARC Cars entry in the Invitational class.

Bathurst 12 Hour to be streamed for free on Motorsport.tv