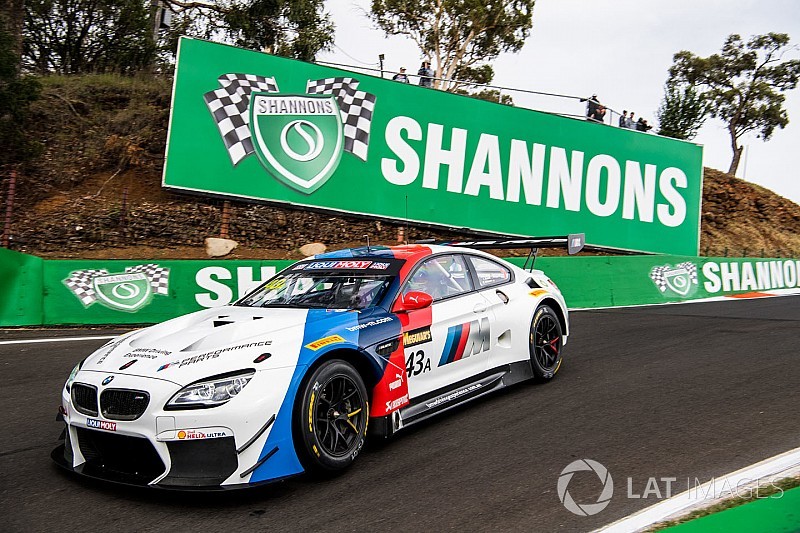 Mostert ran second last in the Shootout after qualifying second earlier today, becoming the first driver under the 1m02s bracket all weekend with a stunning 2m01.934s.

That benchmark proved a little too much for provisional polesitter van der Linde, whose 2m02.169s secured the outside of the front row for the #22 Jamec Pem Audi.

Christopher Haase made up three spots from his regular qualifying position to put the #74 Jamec Pem Audi third on the grid, while the Pro-Am #777 Buik Lamborghini entry was a big mover thanks to Luke Youlden, making up four spots.

Those two cars moving forward meant Scott McLaughlin went a couple of spots backward, and will start fifth in the #47 YNA McLaren.

The #55 Strakka Mercedes was a surprise addition to the Top 10 Shootout, drafted into the single-lap dash after the #100 BMW Team SRM entry, which was third fastest in regular qualifying, was disqualified for a technical infringement.

Driver Cam Waters didn't wast the last-minute call-up either, effectively going from 11th on the grid to sixth with an impressive lap at the very start of the session.

One of the drivers who gifted a position to Waters was Robin Frijns, who dropped a pair of spots thanks to a slow first sector and will start seventh in the #37 WRT Audi.

Another was Shane van Gisbergen, the #58 YNA McLaren driver losing time after running wide at Turn 1 and at The Chase and dropping down to ninth.

The biggest loser of all, though, was #12 Competition Porsche driver Matt Campbell, who ran wide at Turn 1 and turned fourth on the road into 10th on the grid.

That was a reprieve for the #17 Bentley, with Steve Kane moving to the inside of the fifth row having been facing the back of the Top 10.