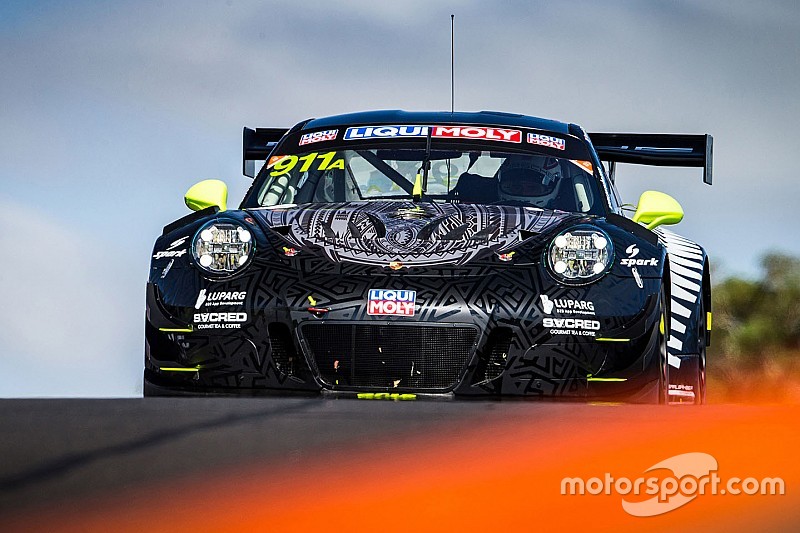 The #18 KCMG Nissan was dominant at times during the penultimate quarter of the Bathurst 12 Hour, however it's the efficient EBM Porsches that hold a one-two advantage with three hours to go.

Maxime Soulet led briefly in the #108 Bentley at the beginning of the seventh hour, before hitting the pits on Lap 156.

Augusto Farfus in the Schnitzer BMW, who had led at the halfway mark, followed suit a lap later, the two cars – now with Vincent Abril and Martin Tomczyk behind the respective wheels – dropping behind the likes of Jake Dennis in the #62 Aston Martin and Dirk Werner in the #912 Porsche that had pitted during the Lap 140 Safety Car.

Those leaders scored more Safety Car luck on Lap 167 when the #91 MARC V8 rolled to a stop at the Cutting. Dennis and Werner both pitted immediately, Matthieu Vaxiviere taking over the Aston and Dennis Olsen the Porsche, the pair returning to the track still leading the way.

Abril moved the #108 Bentley into third by not stopping, ahead of the #77 and #888 Mercedes – in contention thanks to a Jamie Whincup triple stint – which had been sitting third and fourth and stopped right before the SC was called.

Despite having been on the same strategy as the lead Bentley and not necessarily requiring stop, Schnitzer opted to pull Tomczyk in anyway, the #42 left in ninth.

The caution also helped the #999 Mercedes recover from from its earlier drive-though, Raffaele Marciello having jumped in the car shortly before and slotted into sixth as the stops shook out.

There was swiftly a change near the front when the race restarted on Lap 173, Abril trying to muscle his way by Olsen for second at Griffins Bend first time around before getting it done a lap later.

Abril then set after Vaxiviere, eventually passing the Aston for the lead of the race on Lap 181. From there he sprinted away, opening up a lead in the double digits in no time.

Vaxiviere, meanwhile, fell into the clutches of Oliver Jarvis in the #18 KCMG Nissan – who had track position thanks to not stopping during previous caution.

That proved to be a good call too, as there was quickly another Safety Car, this time to recover both Gary Paffett in the #77 Mercedes, stopped with an engine problem, and the #22 Audi, which clobbered the wall at Skyline with Frederic Vervisch at the wheel.

Jarvis could pit, hand over to Alex Imperatori, and still be the best-placed of the cars to stop during the seventh caution in third behind the two EBM Porsches, Sven Muller leading Olsen.

Not long after the restart there was some crucial penalties handed down, the #999 hit with its second drive-through for a Safety Car breach, while the #108 Bentley copped the same treatment.

Crucially they could both stay on the lead lap despite the unwanted tour through the lane, keeping them in contention.

While Imperatori quickly cleared Olsen, Muller did hold onto the lead until pitting on Lap 206, a lap after Olsen in the sister 911.

That left the Nissan with a massive 22s lead over Marvin Kirchhoefer in the Aston and Craig Lowndes in the #888 Mercedes.

Imperatori ended his remarkable stint on Lap 219, handing over to Edoardo Liberati.

Farfus then briefly led again as more stops shook out, before the #911 Porsche, Jaminet at the wheel, took back over at the front when the Schnitzer M6 pitted on Lap 225.

He leads the sister EBM car driven by Matt Campbell, the 911s in the middle of their current stint.

The #51 Spirit of Race Ferrari ahead in the Pro-Am class, Grove Racing still leads Class B, while the #20 MARC V8 is ahead in the Invitational class.

You can watch the Bathurst 12 Hour live and free with Motorsport.TV.