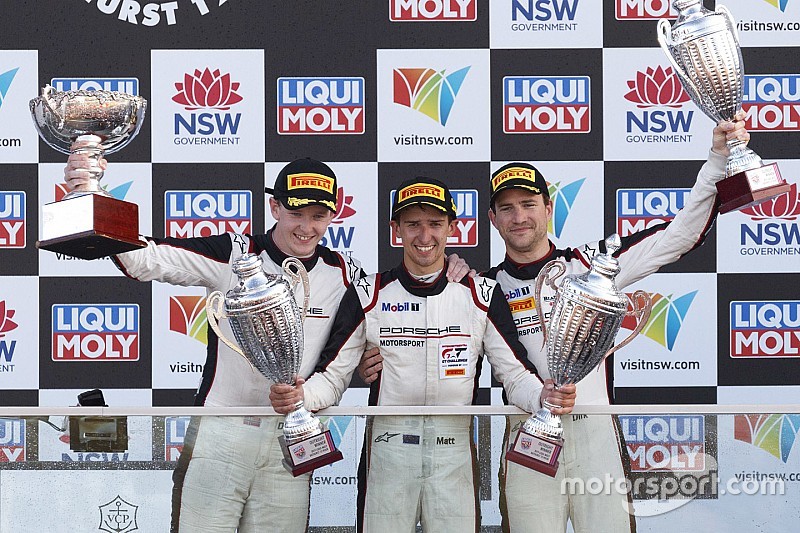 Campbell, Dirk Werner and Dennis Olsen took a sensational victory after a seven-way shoot out to the flag in the final half hour, a bold move on Aston Martin driver Jake Dennis by Campbell at Forrests Elbow key to the win.

However the result is under investigation due a bump-and-run on BMW's Chaz Mostert inside the last hour.

The first of the contenders fell early in the final quarter of the race, the #911 that led at the nine-hour mark forced into the garage with a power steering issues just 12 minutes later.

That left just seven on the lead lap, Campbell leading the way in the #912 entry on an out-of-sync strategy as EBM tried to get the car home on a stop less than everyone else.

The likes of the #62 Aston Martin and the #108 Bentley spent time at the front as the penultimate stops shook out, however once again it was the Porsche that ended up in the lead on Lap 256, now with Dennis Olsen at the wheel, everyone with a single stop to go.

At that point the Porsche's fuel economy became crucial. Getting home required fuel saving, which brought the chasing pack more and more into play as the penultimate stint wore on.

With 75 minutes to go EBM pulled the trigger, bringing Olsen in and putting Campbell back in the car. The net result was a 90s gap to new leader Dennis in the Aston Martin, which, with everyone only needing one more stop, wasn't going to be enough to hold onto the lead.

Instead it was Dennis that had set himself up to lead into the final phase of the race, the Aston Martin driver pitting with an hour to go and emerging with the effective lead still in tact.

Maxime Soulet rounded the expected stops off with his final service with 52 minutes to go, handing the Continental over to Andy Soucek. He was set to slot into second place, but – as happened earlier today – the car stalled at the end of pitlane.

It got going again, but rather than having the leader in sight the car was left way down in seventh, more than a minute behind Dennis.

The leading Aston, meanwhile, was 10s clear of the GruppeM Mercedes, Chaz Mostert 21s behind the leader in third.

With 30 minutes to go there was a controversial change of position at the front, Campbell giving Mostert a bump-and-run at The Chase as he grabbed third spot.

However it was the Safety Car called just seconds later, to recover a stranded KTM midway down Conrod Straight, that really set up a grandstand finish.

It came down to a 22-minute sprint home, the top six running line astern as the #888 sacrificed track position by taking on a fresh set of rubber.

Dennis sprinted when the race went green, leaving Marciello and Campbell scrapping over second. The Mercedes was at a serious tyre disadvantage too, GruppeM having opted to to not take on tyres at their last stop in order to retain track position.

The bottle-neck created by the AMG was brilliant for Dennis, who had 2.5s up his sleeve after a single green lap.

At the start of the second green lap Campbell barged his way into second at Hell Corner, giving him a shot at victory with 15 minutes to go.

Within a lap the gap was a matter of tenths, the Aussie tucked under the Aston's wing. He then executed a perfect move at Forrests Elbow, before charging to a remarkable win.

Dennis came home second, 3s down the road, while Marciello and van Gisbergen staged an amazing battle for third over the closing laps – the #888 car with the significant tyre advantage – that was decided in the Italian's favour by 0.2s.

Mostert finished fifth, Soucek sixth, and Imperatori last of the cars on the lead lap after being penalised for weaving behind the Safety Car on the final restart.

Winner of the Pro-Am class was the#51 Spirit of Race Ferrari of Paul Dalla Lana, Pedro Lamy and Mathias Lauda, while the Grove Racing Porsche of Ben Barker and Brenton and Stephen Grove rounded out a comprehensive Class B win.