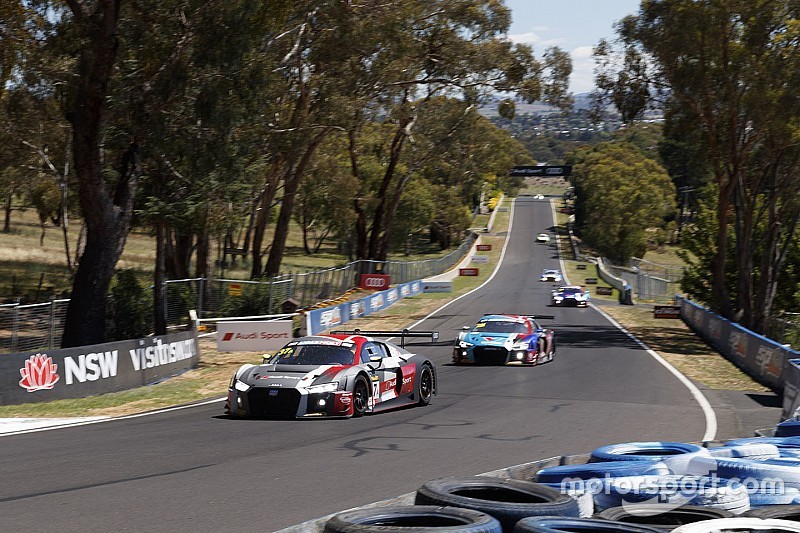 Bathurst 12 Hour winner Robin Frijns says his WRT Audi would have run out of fuel in the final stint had it run green to the flag.

An epic 12-hour contest at Mount Panorama boiled down to tense fuel race inside the last hour, with a number of crews – including the leading WRT Audi – sweating on fuel as the clocked ticked down.

The economy test was ultimately spoilt by a huge crash between Ash Walsh and John Martin with 20 minutes to go, which led to the race being red flagged and then called off with 11 minutes to go.

According to Audi factory star Frijns, that intervention was crucial to the team winning the race. Had the race run green, the Dutchman is adamant he would have run out of fuel.

"Jamie [Whincup] and I were saving a lot of fuel," said Frijns.

"I don't think we would have made it if it was full-on green, so we were hoping for a Safety Car. Eventually the Safety Car came."

Whincup was in a similar boat in the #75 SunEnergy1 Mercedes, admitting that he too would have either needed to stop or risk being left stranded without fuel had the race stayed green for the final 20 minutes.

"No, we wouldn’t have," he said when asked if he would have made the end.

"But that’s motorsport. We would’ve made it with a couple of Safety Car laps. We were holding out – if a Safety Car came we would’ve been fine, which it did. If the Safety Car didn’t come we would’ve had to pit, and we would’ve dropped a few spots and potentially may not have been on the podium.

"But everyone had that call to make. We made the call, some days it works, some days it doesn’t. But as it turns out, we had too much fuel. We finished with too much, we should’ve gone harder and used more!"

Had the race run green, the first team in line that feels it would have made the end is Craft-Bamboo. Earl Bamber was running third on the road in that tense final stint in the factory-backed Porsche, with team boss Darryl O'Young confident fuel wouldn't have been an issue.

"We had a shot for the win, because we had the fuel saved," he said. "Earl did an amazing job keeping the fuel numbers down while maintaining a pace.

"We're quite confident out competitors both had to stop for fuel, and we would have made it."

Not that it would have mattered; after finishing third after the race was declared, the #991 Porsche was swiftly demoted to fifth due to a software glitch that means Laurens Vanthoor spent too long in the car.

"In the end there was a software issue for us," added O'Young. "A strategy software issue. And it ended up calculating two minutes over Laurens' drive time.

"It was mainly due to this race counting pitstops on the double stints, so it was a miscalculation on the software.

"We're disappointed as a team. We put in a great fight, and all the drivers said the car could fight hard at the end of the race. We chose to go fuel save, because it could have been the difference. We knew we could do it if we just did the numbers."

Crash lands Walsh back in hospital