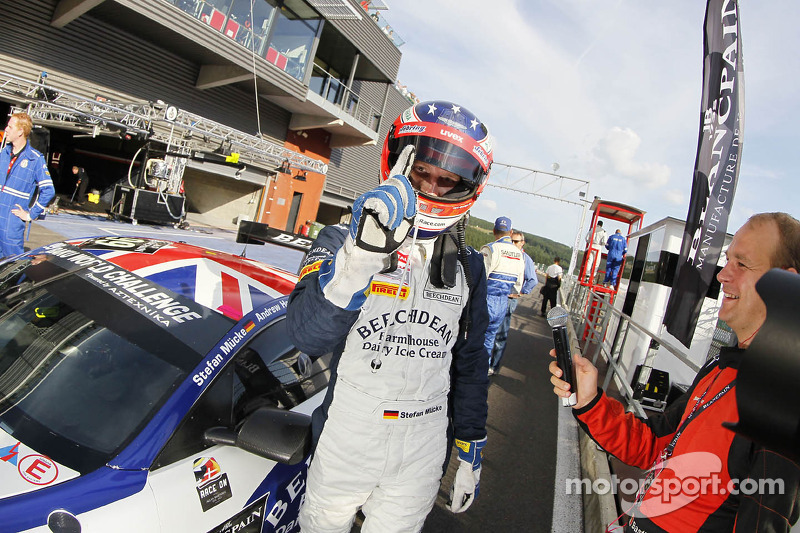 In the fourth round of the Blancpain Endurance Series, Mücke set his best time, 2:20.675, on his second of two Superpole laps, pipping SMP Racing's Alessandro Pier Guidi

Beechdean AMR's Stefan Mücke snatched pole position at Spa-Francorchamps this afternoon for tomorrow's Total 24 Hours of Spa, the fourth round of the Blancpain Endurance Series, in a thrilling 20-minute Superpole session at the classic Belgian circuit.

Mücke set his best time, 2:20.675, on his second of two Superpole laps, pipping SMP Racing's Alessandro Pier Guidi who was 0.227s slower around the Belgian Grand Prix circuit. The result was a reverse of yesterday's qualifying sessions where the Ferrari driver finished ahead of the Aston Martin.

Earlier it was Nick Tandy in the #911 Prospeed Competition Porsche that went fastest, but his time of 2:21.219 was beaten first by Dutch driver, Nicky Catsburg in the Marc VDS Racing BMW Z4, then by the HTP Motorsport Mercedes AMG SLS GT3 of Maximilian Götz who was a further 0.183s quicker. It finished with Götz a close third, and Catsburg fourth.

Porsche factory driver, Tandy was fifth but his team will need to change the engine on the #911 Porsche, and will have to take a 60-second stop/go penalty at the start of the race.

AF Corse were one of three teams to have two cars in the special qualifying shootout. The Italian team qualified sixth with Toni Vilander in the #59 Ferrari 458 Italia GT3, Andrea Bertolini was twelfth in the #50 sister car.

The fastest driver in the Team Belgium group of Belgian star racers was Bertrand Baguette, whose 2:21.293 in the GPR AMR Aston Martin V12 Vantage GT3 was good enough for seventh overall, fourth in the Pro Cup.

Crowd favourite Maxime Martin was eighth in the car that sits second in the Blancpain Endurance Series drivers classification with a 2:21.297, ahead of the Manthey Porsche of Marc Lieb and Alvaro Parente in the #7 Hexis Racing McLaren, the sole MP4-12c to make it into the prestigious qualifying finale.

After the Superpole session the Stewards determined that both SMP Racing cars, #70 and #73 breached the regulations by failing to exit the pit at the scheduled time and have awarded both cars a drive through penalty to be completed between the end of the first lap and the end of the fourth lap.

With qualifying complete, attention now turns to the endurance race epic that begins tomorrow at 16:30 CET and will be broadcast live across the world and streamed live on the championship website.

Stefan Mücke, #99 Beechdean AMR Aston Racing Vantage GT3 – Pro Am Cup
”Starting from the first row is always a good time and a good feeling but I think that it will be difficult to play for the win. I am expecting quite a tough race with the changing weather conditions. We don’t know what is going to happen but a top 10 at the end would be great. I am expecting an interesting first couple of hours but the whole race will be very tight.”

Alessandro Pier Guidi, #70 SMP Racing Ferrari 458 Italia – Pro Am Cup
“I am very happy to start from the front row, especially because yesterday we had a crash during the night with the car and the team did an incredible job overnight and only finished 5 minutes before the start of the Superpole. So, I wanted to do my best for them and I am glad to be here today.”

Maximilian Götz, #84 HTP Motorsport Mercedes SLS AMG GT3 – Pro Cup
“It was really good, we did the same lap times than yesterday, and I am very proud to be here. This is my first time at Spa as well as this is the first race here for my team HTP Motorsport, so I think we did a good job! Second row is good but it is a long and tough race, and we expect different weather so we will see what happens!”

Nicky Catsburg, #4 Marc VDS Racing Team BMW Z4 – Pro Cup
“It is nice to be on the second row for the Belgian team. To be honest it was a bit stressful but we managed to do a good time. I am happy to be here and it is an honour to be in such a great drivers’ line-up and team. The team is very well prepared, all the ingredients are gathered. Everything is top prepared so I think we have good chances to be at the top.”

Nick Tandy, #911 Prospeed Competition Porsche 997 GT3 R – Pro Cup
“It is very nice to be here, because we started the weekend with problems on the engine and we had to change it…Tomorrow we will have to do a one-minute Stop&Go penalty immediately at the start of the race so starting at the front is good but we will shortly be at the back. The good thing is that the car has good speed and we are good on many laps. We are proud to be here, because we are running with Prospeed in the Team Belgium but also because it is the 50th anniversary of the 911 and we are running the 911 number.”

Toni Vilander, #59 AF Corse Ferrari 458 Italia – Pro Am Cup
“I would like to thank SRO for the format of the race, which is exciting. It is nice to be part of the Superpole, especially because it was not supposed to be me at the wheel at first. The track was quite hard today, hot and humid, so we were struggling a bit with the tyres but it worked out well, eventually. Everything is looking good, we have a strong, consistent line-up so we just want to be out of trouble and finish the race.”

Peter Kox, #24 Blancpain Racing Lamborghini LFP560-4 – Pro-Am Cup
“Unfortunately the Superpole did not go as well as we expected. A competitor went off just before me so the track was dirty and I almost went into the wall myself. We are only seventeenth for the start tomorrow but this is a long race, very competitive, so anything can happen. Yet, we were really happy to be in the top 20 yesterday evening and we are confident for the race. We still have some issues with the set-ups but I think that we improved the car.”

Second row start for Marc VDS at 24 Hours of Spa