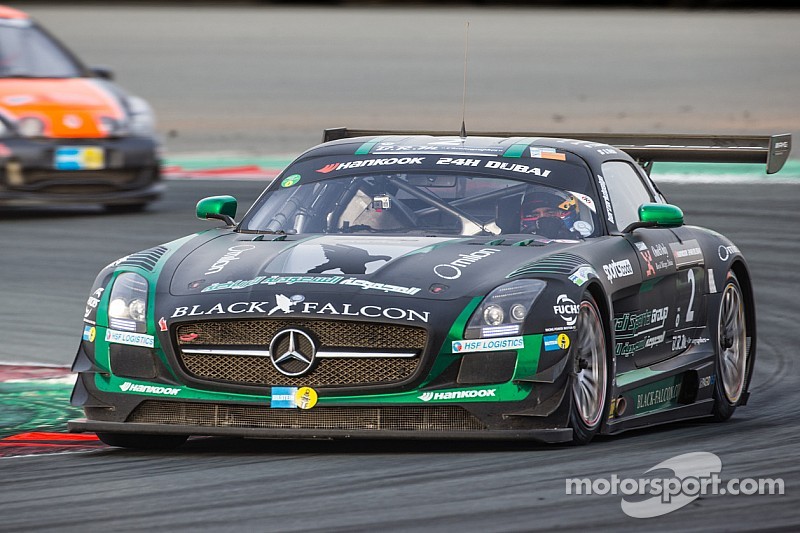 Mixed fortunes for UAE teams and drivers in tenth edition of the race.

The number two Black Falcon Mercedes of Abdulaziz Al Faisal, Hubert Haupt, Yelmer Buurman and Oliver Webb defied the odds to claim a famous victory in the tenth edition of the the Hankook 24 Hours of Dubai, held under the patronage of His Highness Sheikh Hamdan Bin Mohammad Bin Rashid Al Maktoum, Crown Prince of Dubai and Chairman of Dubai Sports Council.

On Friday at 14.00 local time, His Highness Sheikh Juma al Maktoum and Dr. Mohammed Ben Sulayem president of the ATCUAE each waved a United Arab Emirates national flag to unleash the field of 89 cars.

Pole position winning Fach Auto Tech Porsche team took an early, but they were stalked by the Black Falcon team who remained at the sharp end of proceedings throughout the race.

After nine years of trying to win this race at last I stood on the top step of the podium. A very sweet victory not only for me but the Black Falcon team and my teammates.

They began to stamp their authority on the race by claiming the lead on lap 22 and thereafter spent long stints at the front. By lap 276 they were in command and remained in the lead until lap 604 when the chequered flag waved to end the race at Dubai Autodrome.

Victory was particularly satisfying for Saudi Prince Al Faisal, who after nine attempts finally scored his first victory in the Dubai endurance race. He said afterwards, "After nine years of trying to win this race at last I stood on the top step of the podium. A very sweet victory not only for me but the Black Falcon team and my teammates."

"Our team were strong all week long, maybe not the outright fastest but for sure the most consistent. We drove smart, kept out of trouble and because of this we won the race. It was tough with so many cars battling it out all day and night. Personally this victory ticks a very big box in my career."

Team boss Leon Price said of the achievement, "I am over the moon. The team was superb in all facets, the drivers delivered exactly what was expected of them. Despite a problem with the rear wheel which forced us to run the same tyre for four hours, there was no panic and we just stuck to the game plan."

"This is our second 24 hours win in two years at Dubai Autodrome, our home track and that has earned respect from our rivals which makes it extra special," added Price.

It was also big celebrations in the Memac Ogilvy Duel Racing pit garage as Phil Quaife and the Moutran brothers Nabil, Ramzi and Sami claimed victory in the A3T Class in their SEAT, after a dominant performance throughout the 24 hours.

Ramzi Moutran said afterwards, "What a great feeling to win here in our home town Dubai, at our home circuit Dubai Autodrome. It was all down to a great team effort from mechanics, to drivers through to our entire support network. A real family affair that came good on a big stage. We are elated with the result."

On the other side of the coin it disappointment for the Abu Dhabi Racing Black Falcon Mercedes of Jeroen Bleekemolen, Bernd Schneider, Andreas Simonsen and local hero Khalid Al Qubaisi who took over the car for the third stint. He kept up the momentum in second place but bad luck struck on lap 88 when a slower car collided with the Mercedes.

In the pits the Black Falcon crew did everything possible to repair the Mercedes AMG SLS GT3, but the damage to the rear suspension and the chassis was too severe, thus the team decided to retire car number three.

Al Qubaisi explained, "I had an accident while overtaking. A car hit me on the right rear a couple of laps before our scheduled pitstop. Up until that point our times and performance was really great, the car showed winning potential, but this is motorsport sometimes you win and sometimes you lose."

"But on the other hand I am delighted for my 'brother' Abdulaziz [Al Fasial] who today won this race for the first time. For me this is even better than me winning, and erases the disappointment of the incident which affected us. I am very happy for him and the Black Falcon team," declared Al Qubaisi.

The Lap57 Honda, with a strong line-up of UAE champions including Mohammed Al Owais, Abdullah Al Hammadi, Nader Zuhour, Rupesh Channake along with guest Japanese driver Junichi Umemoto were victims of technical gremlins which cost them valuable time in the pits, after leading and running strongly in Class A2. They nevertheless recovered to finish fourth in class.

Dubai based Zettanet Racing Team Honda team had a problem packed weekend, and were forced to retire early on in the race with engine issues.

Speaking at the end of the race Dubai Autodrome chairman Ali Al Fardan said, "This race was another epic duel at our race track, and a fitting episode for the tenth anniversary of this race in Dubai. A big congratulations to winners Black Falcon and applause to our UAE based teams Dragon Racing and Memac Ogilvy Duel Racing for their superb showing."

"I want to thank Creventic and their team, the ATCUAE and our own team at Dubai Autodrome for their efforts throughout the week which made this event such a huge success and so popular with teams, drivers, media and fans. Finally a big thankyou to Hankook who I sincerely hope enjoyed their first event as the title sponsor," added Al Fardan.