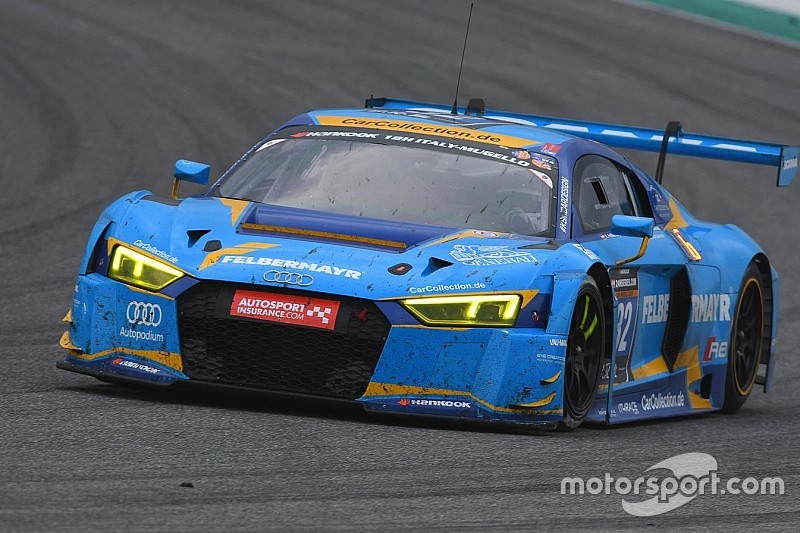 Tomorrow, the race will be resumed, during overnight, cars will be kept under parc fermé conditions

Having secured pole position in the dying moments of qualifying for the fifth round of the 2017 24H Series powered by Hankook, the Herberth Motorsport Porsche 911 Cup R (#911, Daniel Allemann / Ralf Bohn / Robert Renauer / Alfred Renauer) had established a comfortable lead during the opening stages only for a puncture to drop the German squad back down the field.

As well as holding the overall lead with a third of the race already in the bag, the #32 Car Collection Audi also leads the SPS automotive performance Mercedes-AMG GT3 (#24, Alexandre Coigny / Iradj Alexander / Richard Feller) in the A6-Am class, despite the latter slowing dramatically on the formation lap. The sister Car Collection Motorsport Audi (#34, Johannes Dr. Kirchhoff / Gustav Edelhoff / Elmar Grimm / Ingo Vogler) sandwiches the Mercedes, and lies just over a minute behind on-track.

As expected, the 2017 12H IMOLA has not been without drama. The Scuderia Praha Ferrari 458 GT3 meanwhile (#11, Jiri Pisarik / Josef Král), having dropped to 4th up at the rolling start, made brief contact with the #27 GP Extreme entry, an impact that would buckle the Ferrari’s passenger door and send the United Arab Emirates entry to the pits with a puncture. This ‘love tap’ paled in comparison though with the struggles faced by the sister GP Extreme machine (#28, Jean-Pierre Valentini / Tiziano Carugati / Bassam Kronfli): having replaced the engine in its entirety after qualifying, significant gearbox maladies means the #28 Renault had still not completed a lap by the time the chequered flag had been flown.

Overnight, cars will be kept under parc fermé conditions. Tomorrow, the race will be resumed from 11.00 till 19.00 hrs.