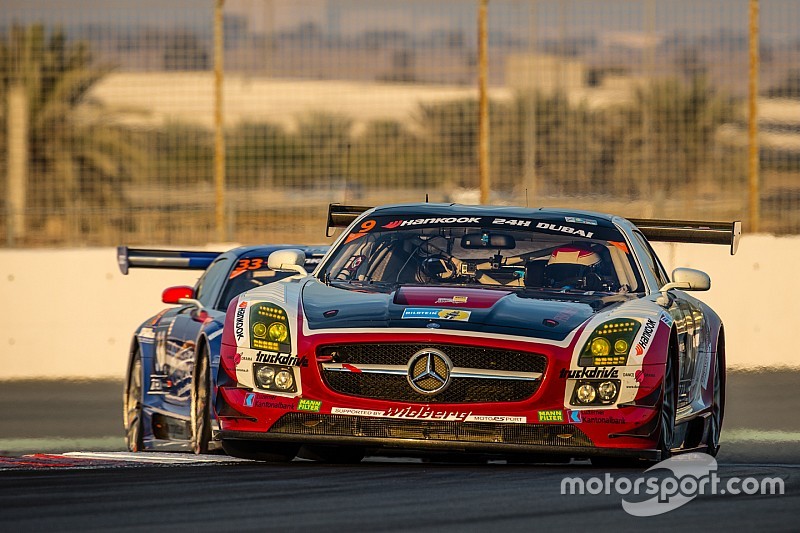 Zandvoort  – With a lap time of 1:38.283, Dutch driver Christiaan Frankenhout was fastest in qualifying for the Hankook 12H Zandvoort. Second place went to Thomas Jäger, 0.317 seconds from the pole-winning time. Jäger’s car, the #30 Ram Racing Mercedes-Benz SLS AMG will also start on the front row. The second row of the grid has Bernd Schneider in the #2 HP Racing Mercedes-Benz SLS AMG and Alfred Renauer in the #7 HB Racing Team Herberth Porsche 997 GT3 R.

Frankenhout’s fast lap came near the middle of the special 20-minute session for the fastest classes of A6, 997, and SP2. Before he took to the track Peter Kox in the #4 Scuderia Praha Ferrari F458 Italia GT3 had the early fast time with Heinz Schmersal second fastest in the #27 Car Collection Mercedes. Once Frankenhout set his time both Schneider and Jäger tried hard to overtake him but were unable to do so, with both putting in their fast laps near the end of the period.

Luca Rettenbacher captured the pole in the 997 class with the #52 MSG Motorsport Porsche 991 GT3 Cup with a time of 1:44.775. He was challenged late in the session by Xavier Maassen in the #20 MRS GT-Racing Porsche, but the experienced Dutch driver had to settle for second. In SP2 Jeremy Reymond waited until the last moment to set the pole time with the #150 GC Automobile GC 10. He passed the time set earlier by Jake Camilleri with the #92 MARC Cars Australia Mazda 3 V8.

A separate 20-minute qualifying session was held for all the other classes. There were stirring battles in each class with frequent changes in positions. Ollie Jackson took the top spot in SP3 in the #169 Speedworks Motorsport Ginetta G50 with a 1:47.661. Behind him James May in the #43 APO Sport Porsche 997 Cup just slipped past Devon Modell in the #170 Speedworks Motorsport Aston Martin Vantage GT4. Michael Tischner put in a late surge to put the #81 Tischner Motorsport BMW E46 M3 on the A5 class pole, edging Cor Euser in the similar #83 Cor Euser Racing BMW. Third fastest and early A5 leader was Vincent Radermecker in the #208 Team Altran Peugeot 208 GTi.

The lead in A2 changed several times with Jacob Kristensen, brother of mutiple Le Mans winning Tom, quickest in the #115 Team K-Rejser Peugeot RCZ. He was just ahead of Ricky Coomber in the #99 RKC / TGM Honda Civic Type-R and Luigi Stanco in the #112 Presenza.eu Racing Team Renault Clio. The pole in the all-BMW M235i Racing CUP1 class was taken by Michael Schrey in the #73 Bonk Motorsport entry.