After the brilliant fourth place on the grid, and pole position in the Pro-Am Cup, everything was being prepared at Blancpain Reiter Engineering for this gruelling 24 hours race. Jos Menten was fully confident just prior to the race: “During the warm-up we checked everything once again, and it all looked pretty good for the race. It is important to steer clear of problems during the opening faze, and to basically run our own race. It’s a tradition to go flat out in the early stages, but we aren’t going to play that game. The flag only drops tomorrow at 16.00hrs,” Menten commented looking ahead.

In front of packed grandstands it is Peter Kox who takes the start with the #24 Lamborghini Gallardo LP600. The Dutchman takes a phenomenal start and charges on through into third place in the Eau Rouge. On the Kemmel straight Kox in the Gallardo comes up alongside the BMW of Marc VDS Racing, and following the braking area at Les Combes moves on up into second place. It soon becomes apparent that the 63rd edition of the 24 Hours of Spa is turning into an intense battle. 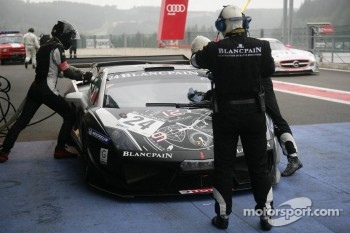 Kox finds himself sandwiched between the two ProSpeed Porsches …and in the third lap everything goes wrong. The Porsche behind Kox with a kamikaze manoeuvre tries to get passed the Blancpain Reiter Lamborghini in the Bus stop chicane. Kox pulls out all the stops to avoid contact, however the Porsche driver hits his team mate in the leading car, forcing the car out of the race and whereby the Lamborghini Gallardo LP600 takes the lead as it crosses the line. The message to the other competitors is now pretty clear: Jos Menten, Peter Kox and Marc Hayek are down in the Ardennes to fight it out for overall victory: “Peter has found the right pace. We had a problem free start, now we need to handle this in a sensible manner and steer clear of problems.”

The race has barely covered ten laps when it is neutralised as the result of a serious crash involving one of the McLaren cars. “We didn’t come in immediately to fill up. The intention was to stay out as long as possible before refuelling, without loosing too many places to our immediate rivals. Through the Balance of Performance we are obliged to complete a pit-stop every 65 minutes, and it seemed sensible to keep Peter out on the track a little longer”, Menten commented regarding the strategy. The choice paid off, because two hours into the race it is the #24 Lamborghini Gallardo LP600 of Jos Menten, Peter Kox and Marc Hayek which leads the race!

Unfortunately during he third hour of the race fate steps in a first time for the Blancpain Reiter Engineering team. The car bearing start number 25 is on its side in the Bus stop-chicane, resulting in a second neutralisation of the race. In the meantime Marc Hayek is getting ready for his first stint at the wheel of the great looking Blancpain Lamborghini Gallardo. “Marc took over the wheel from Peter and quietly drove his laps. He was almost at the end of his stint when the team manager asked me to take over the drive. A few seconds later on the TV screens we saw white smoke billowing from the exhaust. The race was over”, Menten sighed.

“We still do not know precisely what caused the problem, but it appears to be the power train which gave up the ghost. It’s obviously a bitter way in which to retire from the race, especially when you see how the race was evolving up front. Just about all the favourites experienced either technical problems or accidents during the night . We would definitely have been playing up front right through to the finish, however fate decided otherwise. Next time better”, the winner of the 24 Hours of Spa 2009 commented.