Enzo Ide preparing for his first 24 Hours of Spa-Francorchamps 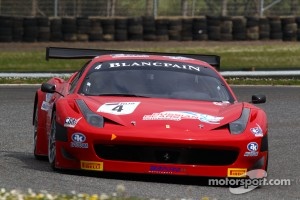 In 2012 Enzo Ide is competing in the GT World Championship with AF Corse Ferrari, but this coming weekend he will also be making an appearance in the 24 Hours of Spa- Francorchamps, the biggest GT race in the world. The 24 Hours of Spa-Francorchamps is part and parcel of the European Endurance championship of the Blancpain Endurance Series and the Italian AF Corse Ferrari team will be entering no less than four Ferraris 458 GT3. One of these is for Enzo Ide, teamed up with the Italian professional drivers Raffaele Gianmaria and Marco Cioci. Fourth man on board of the Italian muscle car is the British gentleman driver Jack Gerber.

The 24 Hours of Spa is part of the select group of 24 hour-races with an exceptional international flavour. Together with Daytona, the Nürburgring and obviously Le Mans, Spa attracts fast drivers and strong teams from all over the world. For this edition, held on 28th and 29th July no less than 60 GT3 cars will battle it out during 24 hours for overall victory. Ferrari is one of the 12 makes that have placed Spa on their wish list and AF Corse is the strongest representative of the make boasting the prancing horse.

Enzo Ide: “This is my first time at Spa for the 24 hours race. I’ll experience a premiere here as I have never driven on this glorious Ardennes track at night. I presume that I will soon acclimatise to the conditions, seeing we will have the opportunity to prepare for the event on Thursday evening. Seeing this is my first time I’m out to gain loads of experience. I have previously competed in a race of this length and won same, but you can’t compare Spa to the 24 Hours of Zolder. There are more cars in Spa, the level is quite a bit higher and more especially all the cars are GT3s, in other words equally fast. I’m really looking forward to it.”

Enzo Ide will be at the wheel of an AF Corse Ferrari 458, with a strong team. Raffaele Gianmaria and Marco Cioci are both experienced drivers, whilst the British gentleman driver Jack Gerber also competes in the Blancpain Endurance Series for the Italian team. Enzo Ide: “We’re competing in the Pro/Am category, which implies that in theory we won’t be battling it out for overall victory, but we are aiming at clinching a podium spot in our class. Now if you analyse the entry list you will notice that there are far more cars in our class than in the Pro-class and so we can definitely hope of obtaining a good overall final ranking. I have deliberately chosen this configuration seeing my lack of experience in this specific race. Prior to wanting to fight it out for victory I feel it’s important to build up my stock in trade somewhat..”

True to tradition the 24 Hours of Spa kicks off on Wednesday with the parade in the centre of Spa and ends on Sunday with the chequered flag dropping at four o’clock in the afternoon. Enzo Ide: “Wednesday is a day totally focussed on the fans. In the afternoon we head off on the public road from the Francorchamps circuit to the centre of Spa, where an autograph session is on the programme. On Thursday we have the timed sessions and on Saturday we start off at 16.00hrs. I can’t wait to get going!”

Seven BMW Z4 GT3s line up at the Spa-Francorchamps 24 Hours.

BMW and McLaren show well ahead of Spa Super Pole