Times from day one at the Bathurst 12 hour.

The #1 Erebus Mercedes SLS started the session strongly and continued to progress with former V8 Supercar racer Maro Engel blitzing the circuit to set a new event record time around the 6.2km circuit.

Engel’s 2m04.4533s effort was eight tenths of a second quicker than sister Erebus Motorsport Mercedes SLS of Will Davison, who had held the top position for a considerable amount of time.

Times kept falling as the session drew towards a conclusion with the Maranello Motorsport popping up into third with a great lap from ex-F1 star Mika Salo. 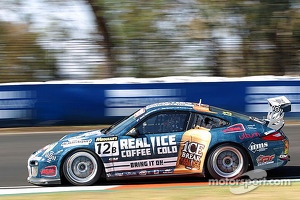 The session was once agin interrupted by three red flags but this didn’t prevent a fascinating session from unfolding. The HTP Mercedes endured the biggest incident as Harold Primat hit the wall at McPhillamy, which brought out the red flags.

Dale Wood in the M Motorsport Lamborghini set the initially pace before Bastian eclipsed the effort with a 2m07.6660s. A change overt of drivers to Engel saw the former DTM star shave more time of the car’s best lap.

The Nissan GTR continued its strong performance from earlier in the day as it held a spot inside the top five for the majority of the session.

However, the last ten minutes produced a flurry of quick times. First Davison topped the times but his team mate responded with Engel storming to the top with a 2m04.4533s lap.

The #23 JBS Swift Lamborghini was the quickest in Class B with a time which was good enough for fourth overall.

The #70 MARC Focus was the quickest of the three Ryan McLeod cars in the Invitational class and the #95 Abarth was the fastest in Class F.

Bathurst 12hr: Griffin gunning for podium finish on the ‘Mountain’

Stanaway drives a V8 for the first time since retiring