First victory in the season for Frikadelli-Racing 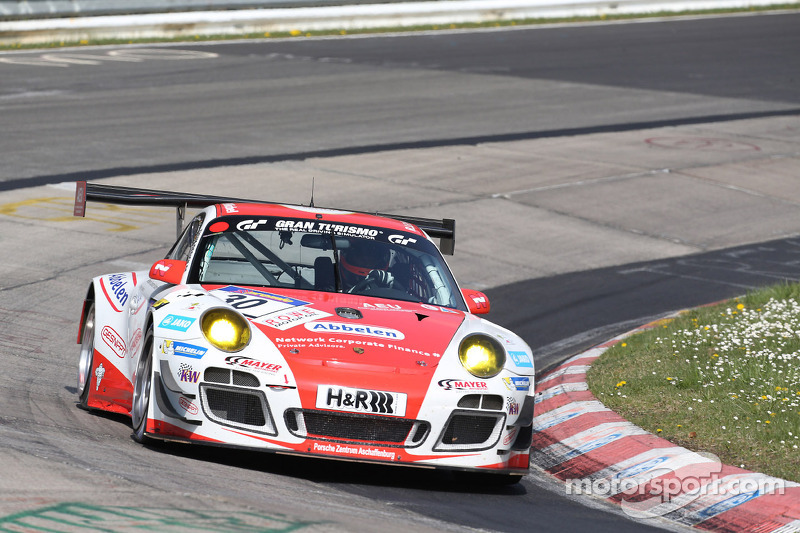 Frikadelli Racing won the VLN event this past weekend in a race that was stopped due to a horrific accident that fortunately saw both drivers walk away.

The joy in the pit lane was enormous when Patrick Pilet (France) took the chequered flag as race winner in the Porsche 911 GT3 R of the Frikadelli Racing Team. Together with Klaus Abbelen, Sabine Schmitz (both from Barweiler/ Germany) and Patrick Huismann (Netherlands) the driver quartet took the first victory of the year for Porsche at the 39th DMV 4 Hour Race. For the local heroes this marked the second triumph in the history of the team. Marcel Fässler (Switzerland) and Markus Winkelhock (Berglen-Steinach/ Germany) in an Audi R8 LMS ultra finished in second place. The top three were completed by Martin Ragginger (Austria) and Alexandre Imperatori (Hongkong) in another Porsche 911 GT3 R, entered by the Team Falken Motorsports. A 30 minutes summary of the race will be shown in channel Sport1 on 19th April at 16:30hrs. Repeats of the reports will be shown in pay TV channel Sport1+.

The second round of the year had to be stopped with the red flag due to an accident after 51 minutes. “There was a collision at the section Pflanzgarten in which the Porsche with start number 101 and the Volkswagen Scirocco with number 505 were involved”, informed Clerk of the Course Bernd Burkhard (Jülich/ Germany). “Steve Jahns (Luxembourg) and Constantin Kletzer (Austria) were fortunately not injured and there were no diagnostic findings in the medical checks subsequently carried out.” As the Armco barriers were badly damaged in the accident, a break for repair had become necessary.

The restart was given at 16:15hrs for a remaining distance of two hours. Both parts of the race were classified separately and the final results and the decision of the day victory were established in adding the two parts. As the total race distance came up to 2:42:06,345 hours in the addition, full points for the endurance racing championship will be awarded for the 39th DMV 4 Hour Race.

Start driver Huismann who took the start from fifth position went right into the lead still in the first lap. He was able to increase his advance up to the stopping of the race onto more than 20 seconds. In the second part of the race, the Frikadelli Porsche crossed the finish line only a few seconds behind the later second placed crew. “We have exploited all of our opportunities and earned the victory as a team”, said Abbelen. “In our team, all drivers went flat out and we did not apply any team orders. For me, politics is a foreign word in motorsports. We start to win.” The driver duo of the Phoenix team was in particular happy with the running of the second part of the race. “We had not yet been in the top group in the timed practice nor in the race”, said Fässler. “In the second part then, we benefited in particular from the good strategy of the Phoenix team.”

The win in group H went to the experienced Opel Manta team with Olaf Beckmann (Oststeinbeck/ Germany), Peter Hass (Lorsbach/Hofheim/ Germany) and Volker Stryczek (Dehrn/ Germany). On the previous day, a tree at the Nürburgring was dedicated to the driver trio which is so popular with the fans, a really good omen for race two. “It is a great honour for me that a tree was dedicated to us”, said Strycek who, together with Beckmann and Hass, finds himself in good company. In the vicinity of their birch tree are the trees dedicated to Heinz-Harald Frentzen and Formula 1 World Champion Mika Häkkinen.

The winners in the Opel Astra OPC Cup were Heinz-Otto and Jürgen Fritzsche (both from Hückeswagen/ Germany) and Thorsten Wolter (Berlin). In the addition of the two race parts, the driver trio had an advance of 3.093 seconds ahead of Mario Merten (Kelberg/ Germany) and Jürgen Nett (Mayen/ Germany) who finished second. The Porsche Carrera Cup class was dominated by Dominik Baumann (Dortmund/ Germany), Felipe Laser (Hamburg/ Germany) and Stefan Landmann (Austria). The current champions, Dirk and Tim Groneck (Melle/ Germany), scored a superior victory in the Renault Clio Cup class. Dörr Motorsport with the driver trio Maciej Dreszer (Poland), Arne Hoffmeister (Lutter/ Germany) and Fabian Wrabetz (Bad Soden/ Germany) finished first in the TMG GT86 Cup. The first day win in the BMW M235i Racing Cup went to Daniel Zils (Bendorf/ Germany), Norbert Fischer (Cologne) and Uwe Ebertz (Sinn Fleisbach/ Germany). The driver trio of Adrenalin Motorsport finished with an advance of 9.531 seconds ahead of Max Partl (Pyrbaum/ Germany) and Jörg Weidinger (Happurg/ Germany) in the new ‚Eifelblitz’ of the Team Scheid-Partl Motorsport. The winners of the VLN opening round, Guido Wirtz (Cologne), Christopher Rink (Frankfurt) and Oleg Kvitka (Russia) – also in the colours of Adrenalin Motorsport – completed the podium in third place.

The third round of the VLN endurance racing championship Nürburgring will take place on 26th April 2014. The 56th ADAC ACAS H&R-Cup will run over the usual distance of four hours.

Marc VDS learning from experience at the Nordschleife