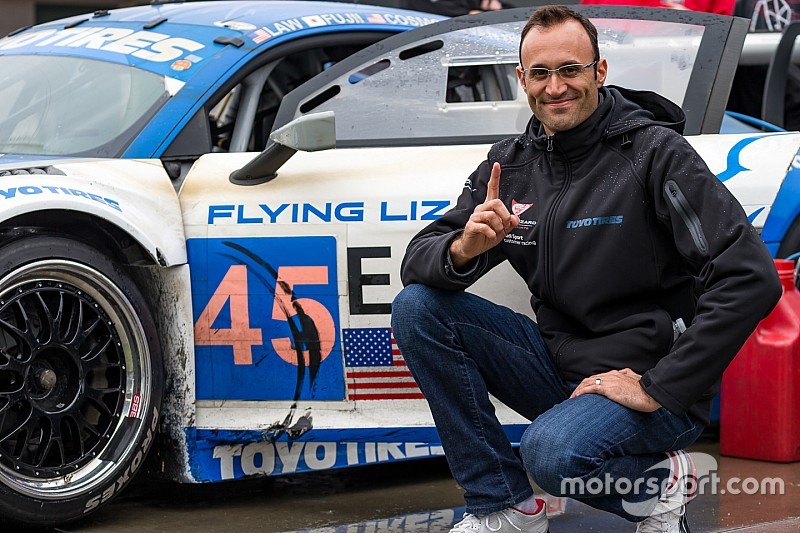 After 25 continuous hours of racing at Thunderhill Raceway in Willows, California, Toyo Tires and Flying Lizard Motorsports not only emerged as the ES class victors, but as overall champions of the longest endurance event in North America.

After months of private testing and tire development, Toyo Tires and Flying Lizard Motorsports put their hard work to the ultimate test in the 25 hour sports car endurance event. The #45 Audi R8 LMS was one of 58 entries to take the green flag, featuring an all-professional driver lineup of Program Manager Darren Law, Tomonobu Fujii, Guy Cosmo and Johannes van Overbeek. All four drivers had previously driven for the team, with Law and van Overbeek as teammates in Flying Lizard's opening season in 2004. Cosmo and Fujii drove for the team starting in 2015, gaining valuable experience in the Audi R8 LMS.

Law started the race Saturday at 11:10AM in 6th position, and impressively climbed to 3rd place by the time he exited turn one. From there, the Audi R8 LMS never left the top three positions on the charts. Each driver ran double stints, running two full tanks of fuel and using two sets of tires before passing the baton to the next driver. The No. 17 Davidson Racing BMW, running in the faster ESR class proved to be strong competition for the Lizards in the opening hours. The Audi and BMW fought hard early in the race but with clean racing and the No. 45 Audi's reliability, the team moved to the top of the overall charts.

By 4:45PM, the sun set and the skies turned black, beginning the 14 hours of night racing. On a sparsely lit track, the Toyo Tires/Flying Lizard Motorsports drivers expertly maneuvered through lapped traffic of the multiple slower classes. Narrowly avoiding multiple incidents, the durability of the Audi R8 and the reliability of the Toyo Tires Proxes allowed the team to continue to expand the lead over the field.

As Saturday turned to Sunday, the skies opened, bringing light sprinkles and heavy rain for the following 12 hours to the race's end. With just one hour remaining, the Audi R8 LMS made its final pit stop, leading the field by an astounding 30 laps. After the Audi covered a distance of 1,973 miles in 690 laps, Fujii brought the car to the checker flag 35 laps ahead of the competition, earning both Toyo Tires and Flying Lizard Motorsports their first ever overall wins in the 25 Hours of Thunderhill.

"The main reason we were here was the end point to our year of developing a tire with Toyo for them. Winning the event is icing on the cake. We always come to win, but more than anything we just wanted to give Toyo an opportunity to test a tire through 25 hours. It's a grueling event. With the dry tires and the wet tires, everything was absolutely flawless. It was an accumulation of what they did all year. We can't wait to see where it goes from here.

Marc Sanzenbacher // Senior Manager, Motorsports, Toyo Tire U.S.A Corp We could not be happier with today's results. When we first announced our partnership with Flying Lizard, we started we were 'in it to win it,' and we delivered on that promise. The combination of our Toto Proxes race slicks and the Audi R8 LMS handled every challenge this race could throw at us, and we had a flawless performance. We look forward to more development and successes in 2016!"

"What an amazing event. This was the first official race we have entered since we began our relationship with Toyo Tires. We spent this entire season working with Toyo on the development of their racing slick and the tires were phenomenal all race; we had no issues. Obviously doing a race like this isn't anything new for Flying Lizard Motorsports, so with a good driver lineup and good race execution, we brought the car home in perfect condition.

It was a challenging race, we had rain, we had dry, it was dark for almost 14 hours and the closing speeds between all of the different classes was big. The priority for us was to just ran a consistent pace and stay out of trouble. To come home with not only a class win but a win overall was everything we could have wanted. We are looking forward to continuing this relationship and defending our win next season."

"It was good to be back under the Flying Lizard umbrella for this race. I'm very impressed by Toyo. When Darren (Law) called and asked if I wanted to do this thing, you never know about tire programs and how they're going to go. However, I have to say, it completely blew me away. We didn't have a single puncture. The performance was great, the balance was great. The rain tires were unbelievable. We had a little bit of everything to try with these tires and they always came out on top. Hats off to Toyo for delivering a really good tire. Hats off to Flying Lizard for putting together yet another race winning car."

"What an event! It was a lot of fun and I'd like to cap it off by saying mission accomplished! We came here to prove what the end result was for all the development of the Toyo Proxes slicks. The tires performed flawlessly. Honestly, they were outstanding. We had great grip, durability, and life. The rain tire was tested very well these past 25 hours. There was a lot of water that fell from the sky. Particularly when I was in the car. The tires were great, the car was flawless. As always, Flying Lizard was also flawless in their preparation and execution. It was just the perfect way you want to go and do this.

You want to go into a big endurance event and know your car is rock solid with no issues. You want a team that does everything right every moment they do something. You want a partner like Toyo that is outstanding in everything they provide. Hopefully this is the start of what will be a big future for them in motorsports. IT was great. My stints were exciting. There were definitely some tense moments navigating traffic. We had huge closing speeds on a lot of the participants, so it was interesting at times. All in all, we had a great run and I'm appreciative for being here."

"I'm really happy. Every stint, our car, Toyo tires, the crew, and our drivers did a really good job. This event, though we have so many cars, and so many different kinds of cars, it can be difficult to race here. Always so much traffic, but we could manage and we kept it safe. For every stint, our Flying Lizard crew was operating at 100%. Our car gave us no trouble and our tires had high grip in the wet and dry conditions. The tires have great potential and are easy to control. I want to say a big thank you to everyone at the team. This is a very important race for a tire manufacturer and for Flying Lizard, as the first race of their development. I'm happy we could win it with them."