Kevin Gleason and his four co-drivers went on to win the 11th annual edition of the longest sports car endurance race in the United States.

WILLOWS, Calif. — Kevin Gleason of Johnstown, Pa. was at the controls when Rotek Racing's Audi TT RS took the lead for the first time around 5 a.m. Sunday in the 25 Hours of Thunderhill presented by the United States Air Force at Thunderhill Raceway Park. Once in front the #24 was never again headed, and Gleason and his four co-drivers went on to win the 11th annual edition of the longest sports car endurance race in the United States by a whopping 28 laps. 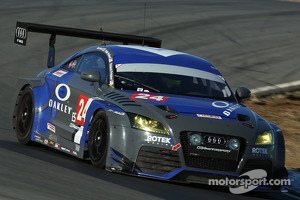 A total of 57 cars started and 40 finished. Gleason's Audi completed 705 laps of the 2.58-mile, 15-turn road course for a total of 1,819 miles. The event was held in cold temperatures, sometimes in the 30-degree area. The Barrett Racing Porsche GT3 Cup #83 finished second overall and the Radical West Radical #38 placed third overall in the event, which is sanctioned by the National Auto Sport Association (NASA).

Gleason, 26, was understandably tired after winning the longest race of his career.

"It was very hectic with the traffic," he said Sunday night. "You passed numerous cars every lap, and you had to be precise and really, really focused.

"It was pretty amazing, because honestly, we didn't have even one issue with the car during the race," he said. "I didn't have any contact with anyone. Maybe one or two of my co-drivers might have had a little nick or something, but nothing major.

"The car was really physical," he added. "You're pulling a lot of G forces, and you had to work really hard, despite the lack of sleep, obviously. One of my stints was a double stint in the middle of the night that was about three hours long. I was in the car when we got the lead, and once we got it we never lost it. 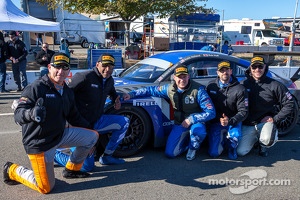 "The Rotek Racing team was excellent," he said. "They had a lot of guys over from Germany. 034Motorsport, with Christian Miller, was managing the team, and they were very professional. All the drivers got along well and it was a pleasure working with the team and all the drivers."

Although it won in dominant fashion, the weekend was not without some drama for the team. An issue with the car's electronic control unit (ECU) forced it to miss a whole day of practice.

"After talking with people over in Germany we got another ECU unit from a similar Audi, and a specialist from the United Kingdom was able to program it for our car," Gleason disclosed. "We got the car fired up just before qualifying on Friday. I guess we got our problems over with before the race, because after that everything went well."

The entry was always in contention, although various other cars led before the race came to it early Sunday morning. The entry's fastest race lap occurred on lap three with a time of 1:45.491.

Gleason's first race of 2014 will be the Continental Tire SportsCar Challenge race at Daytona International Speedway in Daytona Beach, Fla., on Friday, Jan. 24. It is a companion event to the Rolex 24 at Daytona that same weekend. Gleason will drive a BMW 328i E90 for BimmerWorld Racing in the Street Tuner class with co-driver Corey Fergus.