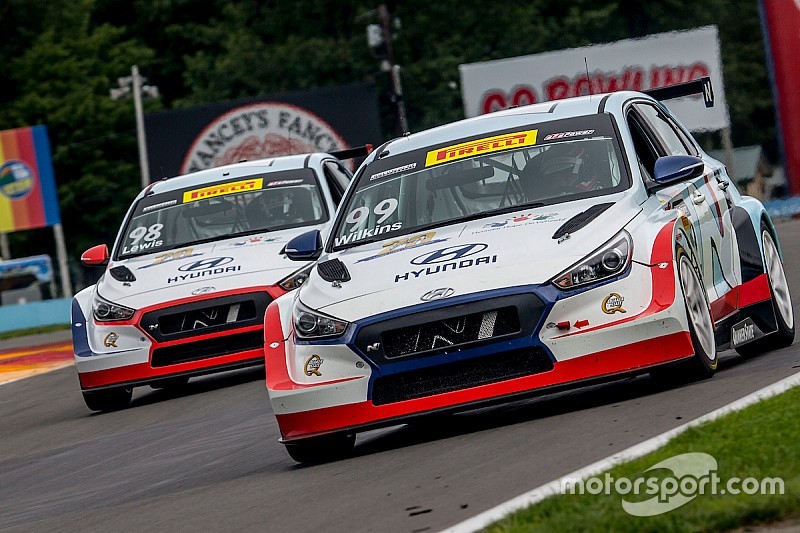 Bryan Herta will team up with his son and 2019 IndyCar driver Colton to race a pair of Hyundai i30s in next week’s California 8 Hours, the finale of the Intercontinental GT Challenge.

The race, which is to be held at WeatherTech Raceway Laguna Seca, sees the senior Herta returning to the track that made him famous.

The legendary 2.238-mile course in Monterey, CA., was scene of his seventh and final win in his dominant season of Indy Lights in 1993. Famously he was robbed of his first CART Indy car victory by Alex Zanardi’s last-lap pass in 1996, but returned to take pole there for the next three years, converting the latter two into victories.

Colton Herta, who made his IndyCar debut at Sonoma Raceway last month after two highly successful seasons in Indy Lights, will team with his father Pirelli World Challenge GTSA champion George Kurtz in the #98 BHA Hyundai entry, while BHA’s fulltimers in the PWC TCR class, Mark Wilkins and Michael Lewis, will team up with Mason Filippi in the #99 car.

Herta, co-owner of the Andretti Autosport IndyCar entry for Marco Andretti and whose team won the TCR class in PWC this year, said: “This is something we wanted to do since we heard about the race last spring. Originally we had planned to run two drivers, Colton and I in one car and Mark Wilkins and Michael Lewis in the other.

“But we learned more recently that we would need to add a Bronze-rated driver to the lineup for each car.  Luckily, we were able to convince George Kurtz and Mason Filippi to join the team for this event, and I really think with their combined experience we are an even stronger lineup now.”

This is the second time that the Herta family has competed together, the first coming in 2016’s 25 Hours of Thunderhill.

“Colton and I really had a blast the last time we raced together,” Bryan said. “And to get to work alongside Mark and Michael, who have done such a great job for us this season in the Pirelli World Challenge, this should be a lot of fun.

“We will get to put the Hyundai i30N through its paces in a new format for us, endurance racing, with pit stops and driver changes and all that goes along with an eight-hour event.”

The legacy that will be left by a tin-top great