Hexis Racing take the spoils in the streets of Baku

As the 2012 racing season winds down, Hexis Racing has decidedly come alive in their final race appearances. After winning the last meetings of the FIA-GT1 Championship at Donington and the Blancpain Endurance Series at Navarra, the French team took the spoils in the streets of Baku, Azerbaijan in the inaugural City Challenge races in front of over 20,000 people. Frederic Makowiecki and Stef Dusseldorp dominated in their win over the hour-long race (53 laps) without being challenged. And save a mechanical problem for the sister car of Alvaro Parente and Rob Bell, the team could have finished with a 1-2. Makowiecki and Dussledorp had already set the tone during qualifying on Saturday. The #17 McLaren MP4-12C was unchallenged during the race despite a safety car period with only 10 minutes to go in the race, as a Porsche Cup stalled on track.

Also showing well in the street race was Vita4One Racing, who completed the podium with a 2-3 finish from Lauda/Kechele ahead of Buurman/Mayr-Melnhof. The third BMW Z4 from Michael Bartels' team, driven by former F1 stars Jacques Villeneuve and Jos Verstappen, came home in a quiet seventh place. The leading Mercedes just missed out on a podium finish, driven by Schneider/Afanasiev (HEICO Motorsport), after a good performance from the five-time DTM champion. The second SLS AMG finished the race in sixth place, just behind the Porsche 911 GT3-R of Mühlner Motorsport (Edwards/Al Azhari). Sean Edwards had a strong race snatching fastest lap after a stop-and-go penalty for a pit stop that was too short. In fact, the same penalty was given to the sister car driven by Nick Tandy and J. Thomas. Per the regulations, teams were supposed to respect a pitstop of at least 75 seconds with a mandatory tire change included. It was suggested before the race that things would get a bit complicated thanks to the narrowness of the cut-out track in the streets of the capital, but in the end there were no major issues. 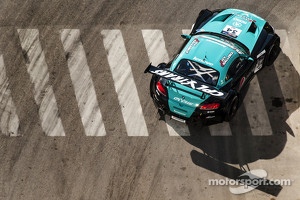 Although they didn't take victory in the Eurovision competition, held here a few months ago, the French were well represented in the City Challenge. Hexis Racing and Vita4One Racing Team battle all season long in the FIA-GT1 championship and they met again in the street fight. Now, City Challenge CEO Harmut Beyer and his team will work to bring more races to a city setting. This first event was a major risk but it's now mission accomplished for the consultant and businessman.

With that, Jacques Villeneuve has already shown his willingness to return: "For me it was a good opportunity to race here. The car handled very well during the weekend, despite an incident in practice. Jos (Verstappen) and I like nearly the same settings on the car. The start was very professional and it wasn't easy to make room in traffic. A GT3 car is totally different from what I'm used to driving, and even more so than a NASCAR. The two have a roof, but that's where the similarities end. I was pleasantly surprised with the city and I'm sure that City Challenge has a good future here. I liked it enough to come back for sure."

Meanwhile, Frederic Makowiecki had a perfect weekend with a pole position, topped off with two wins: "This weekend was fantastic for the whole team. The performance was there the whole time. We had to discover a lot of new things, a street race, new tires, new country, etc...There were many questions. The team was able to answer the call and showed very well. The most difficult thing was the balance of the car in between sessions, as the track changed quite a bit. I took the start and I knew I had to get a good start to keep the lead. I still had a few doubts though, because the McLaren's power comes on at around 75kph and the start was given between 50 and 60 kph. In addition, the car's first gear is very long. Frank (Kechele) took the advantage but I did everything I could to take the whole shot going into the first corner."

We had to discover a lot of new things, a street race, new tires, new country...

Fred Mako continues: "This inaugural City Challenge event was a great show with good organization. I'm sure they gathered a lot of experience for the future. The public's welcome was good as well. We thought it would be difficult to pass here but Alvaro (Parente) proved that wrong. The McLaren's balance is good in general and this extra win is another great success for the car and the work that has been involved. Stef really drove well this weekend and all this season as well. Thanks to Hexis and McLaren for all that they have accomplished this year."

Marc VDS aim for the championship in Spain