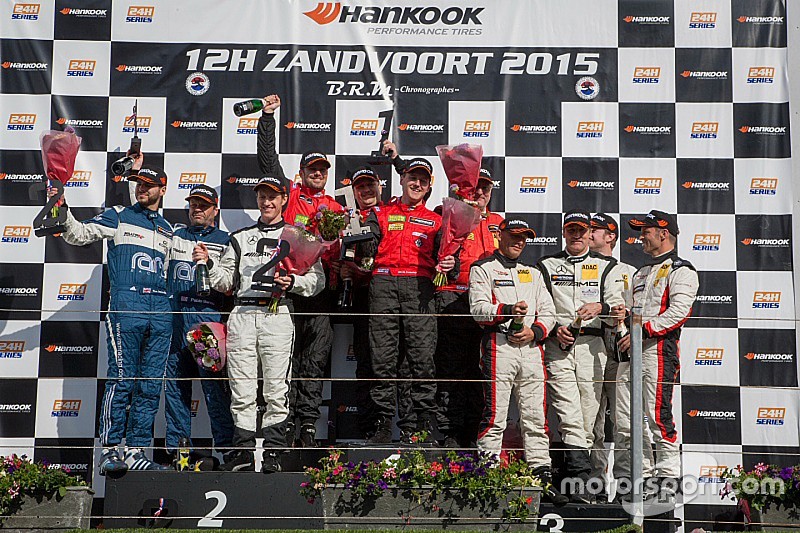 Zandvoort – The #10 Mercedes SLS AMG of Hofor-Racing won the Hankook 12H Zandvoort after a taut battle with the similar car of #30 Ram Racing. Dutch driver Christiaan Frankenhout, Roland Eggimann and Michael Kroll of Switzerland and Kenneth Heyer of Germany completed 351 laps of the 4.3 kilometer circuit located among the dunes on the North Sea coast of the Netherlands. Thomas Jäger of Germany and Tom Onslow-Cole and Paul White of England were the drivers of the second place car.

Mercedes in the top four spots

Three different Mercedes took turns in the lead of the nine-hour Saturday segment. Tom Coronel was the first in front with the #67 GDL Racing entry. He was later caught by Frankenhout. The GDL team then lost time with a loose door. Great stints and pit work by the Ram Racing team kept them on the lead lap throughout and they were able to take the top spot when Hofor Racing made an extra stop.

The dénouement occurred during a late race neutralisation when the Hofor Racing team waited until the fuel depot queue was cleared while the Ram Racing Mercedes was trapped waiting in line. Mercedes filled the top four spots with the #2 HP Racing entry third and the GDL team recovering to fourth. The top car representing other brands was the fifth place Ferrari of Scuderia Praha.

The nine-hour second segment was run in ideal conditions. This was in contrast to the previous day’s first segment which took place in near continuous rain and wind.

Intense dispute in most of the classes

There was drama in most of the classes, none more so than in the all-Porsche 997 category. The final standings have the #52 MSG Motorsport entry over the #20 MRS GT-Racing team. Luca Rettenbacher took the race ending stint in the #52 with Charles Espenlaub in #20. They swapped the class lead several times during the final 15 minutes. On the very last lap at Tarzan Corner, with Rettenbacher ahead by a nose, the two touched and spun, both coming to a halt on the spot. #62 Porsche Lorient Racing took third place with their Porsche 997 Cup S.

The #160 Lotus Evora of Cor Euser Racing won SP3 and finished a remarkable ninth overall. #170 Speedworks Motorsport finished second and #43 APO Sport third. The SP2 class was fought between the two entries from MARC Cars Australia. It was won by the #91 Ford Focus bodied car after the #92 Mazda 3 badged example had a heartbreaking spin in the late stages and finished second. #150 GC Automobile finished third in SP2. The #73 Bonk Motorsport entry of Michael Schrey and Alexander Mies dominated the all BMW M235i Racing CUP1 class, #69 Securtal Sorg Rennsport finished second and #70 MissionPossibleBySorgRennsport third.

The #205 Team Altran Peugeot 208 GTi won A5 after a late race pass of the #75 Hofor-Kuepperracing BMW E46 M3 and the second car of Team Altran #208 finished third. The #112 presenza.eu Racing Team Renault Clio won A2 after steadily building up an unassailable lead. RKS/TGM #99 took the second place and VDS Racing Adventures finished third.

There were seven Code 60 interruptions mostly for stranded cars and minor incidents. The only significant crash was without injury, knocking out the #60 Speedlover Porsche. The 24H Series powered by Hankook now moves on to Paul Ricard in the south of France for a 24 hour race on 10-11-12 July, the Hankook 24H Circuit Paul Ricard.