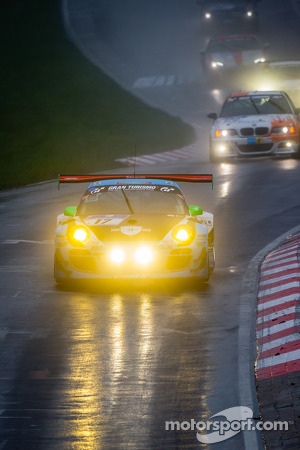 "We qualified 28th in the 170 car field," Keen said. "I started the car and had a clean first stint. It was amazing to be able to start such a huge race. All the fans were on the track hanging over the fence going crazy on the warm-up lap."

Heavy rain was present throughout the Rhineland-Palatinate region of Germany all weekend.

"The weather was some of the worst I've experienced," he continued. "In the video you can see how bad the conditions were at night. This is the longest red flag in recent history for the race due to the weather. I was driving when the red flag came out and I can tell you the lap before it came out was extremely sketchy. Although I did have a great stint in the rain, I made up almost 10 positions. I passed the pole winning Audi and the BMW that finished on podium during this stint."

"Throughout the event the car had two crashes with my co-drivers, so unfortunately we didn't finish the race," Keen continued. "In the end it was an amazing experience as it always is at the Ring."

Cyndie and the Green Hell